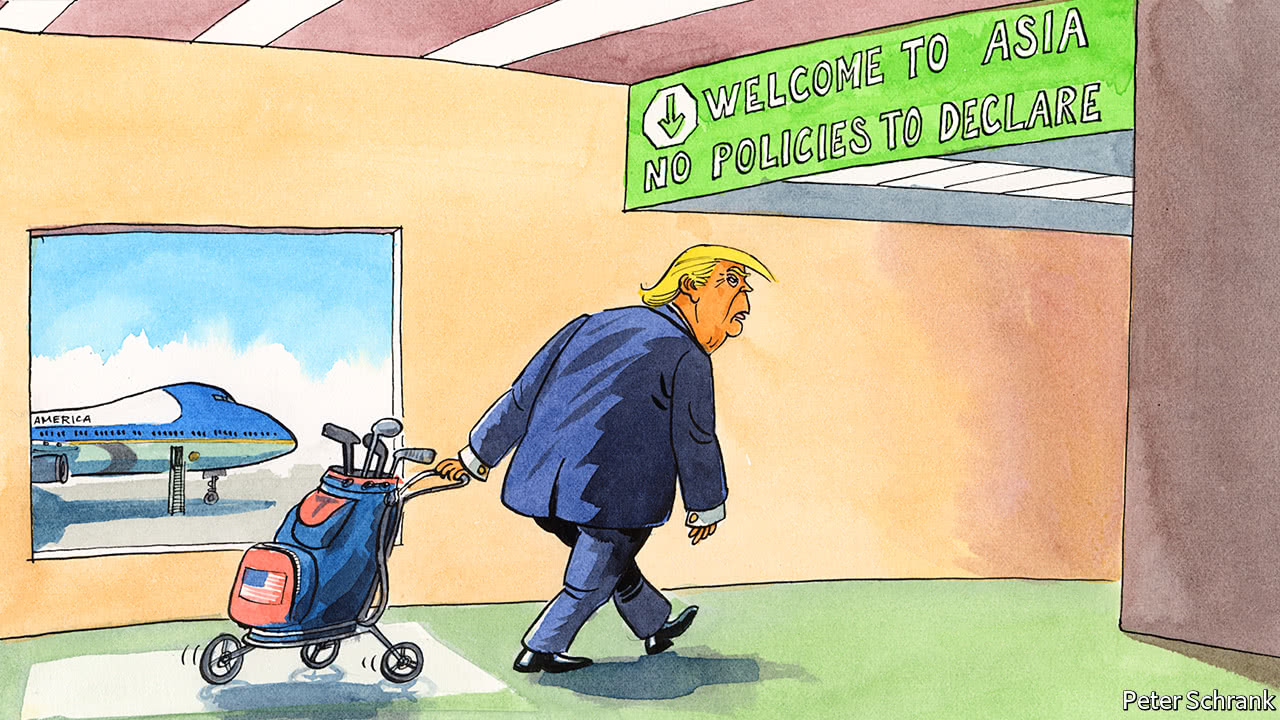 Trips like the one Donald Trump just made to Asia often serve to differentiate a U.S. presidency. They are moments to strengthen alliances or forge new ones, as well as announce strategies and major agreements. By contrast, Trump’s visit to Asia was lackluster and confusing, showing a United States definitely in retreat from its regional leadership role.

Barack Obama had invested considerable diplomatic effort in building a support network for historic U.S. allies, with special emphasis on promoting India as a counterweight to China. In the trade arena, Obama’s great project was the Trans-Pacific Partnership, which was scrapped by Trump.

Many were hoping that the New York real estate tycoon would offer a better alternative to the TPP on his Asian trip. However, Trump continued to be attached to his crude “America First” catchphrase. Thus, the only concrete strategy would appear to be that of renegotiating bilateral agreements, which is in fact what occurred. Xi Jinping, on the other hand, reaffirmed his intention to increase China’s strength as the world leader in globalization, economic openness and the fight against climate change.

The curious thing is that Trump, a proponent of isolationism in trade, did not suggest the same thing in the military arena. First, he encouraged South Korea and Japan to buy more weapons from the United States in the face of the increasing North Korean threat. He also called for a greater collective effort on the part of China and Russia to ratchet up the economic strangulation of the Kim Jong Un dictatorship.

The case of China is noteworthy. After accusing it of “raping” the United States during the campaign, Trump now considers China a “great friend,” and even complimented China for knowing how to take advantage of the U.S. Trump also said that he is confident that Vladimir Putin did not interfere in his election, contradicting intelligence from the CIA and FBI.

While Trump vacillates and bewilders, China continues to expand the monumental new Silk Road, and insists on its alternative version of the TPP, the Regional Comprehensive Economic Partnership. But some parties historically hostile to China, like Japan, continue to be uncomfortable with this proposal. During the Asia-Pacific Economic Cooperation meeting in Vietnam, after heavy lobbying by Japan, the relaunching of the TPP, but without the United States, was announced. I mean, that is almost nothing.

Conversely, Trump spoke vaguely about the “Indo-Pacific.” Apparently, this is to be his administration’s focus with respect to Asia. At the very least, Trump is ignoring the fact that the center of gravity of the region has changed completely. The supremacy of China is a fait accompli, taken for granted even by Russia and India, which is seeking to reposition itself on the global scene with deep domestic reforms.

Trump may be misjudging one of the major geopolitical shifts of recent decades, which occurred this year: the inclusion of archenemies India and Pakistan as full members of the Shanghai Cooperation Organization. That powerful forum, made up of China, Russia and the Central Asian countries, already has Iran as a SCO observer. While Trump continues with his constantly shifting arguments and his anti-globalization tantrums, the nightmare that Henry Kissinger feared – a world revolving around China, Russia and Iran – is becoming more real every day.

The author is Master of China Studies (Zhejiang University, China) and Master of Public Policy (FLACSO or Latin American Faculty of Social Sciences); a political scientist and university professor (UCA or Pontifical Catholic University of Argentina); and director of political analysis.