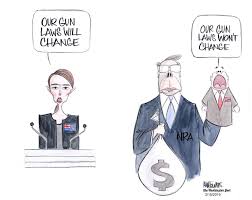 New Zealand’s speedy decision about changing its gun laws, after the attacks on two mosques, is reverberating around the world, but especially in the ears of the presidents of the United States and Brazil.

In the U.S., because of escalating gun violence and hate-related mass killings, people have been demanding reforms for decades. But the government of New Zealand agreed to begin reform of the law three days after attacks on two Islamic houses of worship in the Christchurch area resulted in 50 deaths.

The Cabinet of the oceanic country has come to the conclusion that last Friday’s slaughter was the result of weaknesses in the regulations, according to comments by Prime Minister Jacinda Ardern.

New Zealand changed its rules on access to guns in 1992, two years after a mentally disturbed man shot and killed 13 people in the southern city of Aramoana. However, the purchase of semiautomatic weapons was permitted, something that now may change.

This turns out to be a lesson for other countries, such as the United States and Brazil. The presidents of these two countries have argued loudly for the right of their citizens to own and carry guns.

Brazilian President Jair Bolsonaro took as the signature of his election campaign a hand gesture as if pointing a pistol. In one of his first measures after assuming power, he signed a decree that relaxed the requirements of the Disarmament Statute, a rule intended to make access to guns more difficult in the huge South American country.

Because of the ultra-rightist president’s stance, he is being pointed to as being responsible for a massacre that occurred last week in a school in the São Paulo state. In that incident, two men fired at students, causing 10 deaths, in a country with high levels of violence.

For his part, the current occupant of the White House, Donald Trump, has on several occasions shown his support for the Second Amendment to the Constitution, which allows citizens to bear arms.

The United States has recently been the target of massive protests, such as the one that took place on Mar. 15, when students from Washington went out into the streets to criticize Republican legislators for not supporting a measure against gun violence previously approved in the lower house.

Brenton Tarrant, the perpetrator of the attack on the mosques in New Zealand, described himself as a xenophobe and fascist who admires Trump, whom he considers a “’symbol of renewed white identity.” Tarrant maintained that he and the president share “a common purpose.”

Beyond the racist nature of the attacks, the free use of firearms marks an increase in violence, an assertion supported by both everyday reality and academic studies.

Since Jan. 1, 2018, more than 11,980 people have lost their lives, and 23,332 more have been injured in gun violence in the United States, according to the organization Gun Violence Archive.

There is an ongoing debate on gun control in several countries. The debate is focused on the conservatives’ presumption that an armed population is safer, while at the same time others – more level-headed – claim that arming the citizens, as Trump and Bolsonaro are trying to do, is irresponsible.

About Tom Walker 183 Articles
Before I started working as a translator, I had had a long career as a geologist and hydrologist, during the course of which I had the opportunity to work on projects in Mexico, Chile, and Peru. To facilitate my career transition, I completed the Certificate in Spanish-English Translation from the University of California at San Diego. Most of my translation work is in the areas of civil engineering & geology, and medicine & medical insurance. However, I also try to be aware of what’s going on in the world around me, so my translations of current affairs pieces for WA fit right in. I also play piano in a 17-piece jazz big band.