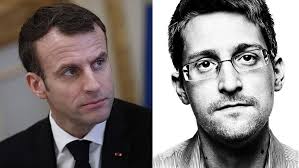 The most famous whistleblower has helped the world immensely to mobilize in the preservation of liberty. It would be an honor for France to welcome him on its soil and offer him protection.

During the Cold War years, Western democracies quite rightly condemned the mass surveillance put in place by totalitarian regimes of the East, and granted asylum to the dissidents who protested oppression.

Some decades later, the Orwellian dystopia in which privacy disappears is becoming a reality throughout the world under pressure from state intelligence agencies with the cooperation of internet giants. The revelation of this erosion of civil liberties is largely owed to Edward Snowden, a talented computer security consultant turned public enemy in his country, the United States.

In 2013, the classified documents that he leaked to the press revealed widespread surveillance conducted by the National Security Agency, his employer at the time. In the aftermath of 9/11, intelligence agencies made the most of widespread internet usage and exponential storage capabilities and threw themselves into systematically tapping communications, without the slightest bit of accountability under the democratic process.

Snowden’s disclosures triggered an awareness, not only of political powers, which are sometimes themselves tricked by the intelligence agencies of their allies, but especially of public opinion. The disclosures opened people’s eyes to the ambiguous role of Google, Apple, Facebook and Amazon, and paved the way for a budding counteroffensive by nations, the sovereignty of which is being chipped away by the ambitions of Google and Facebook.

Snowden flew to South America seeking asylum six years ago, finally finding refuge in Moscow following a layover when the United States confiscated his passport. Even if he changes nothing, Snowden, the most famous of whistleblowers, has helped the world immensely to mobilize in the preservation of liberty.

Recalling that he had sought asylum in France in vain under François Hollande, Snowden announced on Monday, Sept. 16, on radio station France Inter that he “would love to see Macron roll out an invitation.” In fact, it would be an honor for France to welcome him on its soil and to offer him protection.

In 2013, the former French president refused his request, noting that Snowden was not on French soil, a condition required under the United Nation’s 1951 Refugee Convention. However, since 1946, France has provided exceptional protection for “any man persecuted in virtue of his actions in favor of liberty” without needing to be present in the country. French Attorney General Nicole Belloubet, claims to be in favor of such a solution, just like the Macronist member of the European Parliament, Nathalie Loiseau, who says Snowden “rendered service to humanity.”

There is no question it would be shocking to welcome Snowden in France, the man wanted in the United States for spying, nor is there any question that granting asylum would have potential consequences on cooperation regarding intelligence. But, the whistleblower’s fate should not let us forget that authoritarian countries like Russia and China are the first to use the internet to repress their citizens. Quite rightly, Western democracies cannot leave it so that Vladimir Putin is seen as freedom fighter Snowden’s protector. By granting him asylum, Emmanuel Macron would find a way to fulfill his statements about human rights as “the common good throughout Europe” and about the singularity of France in the world.