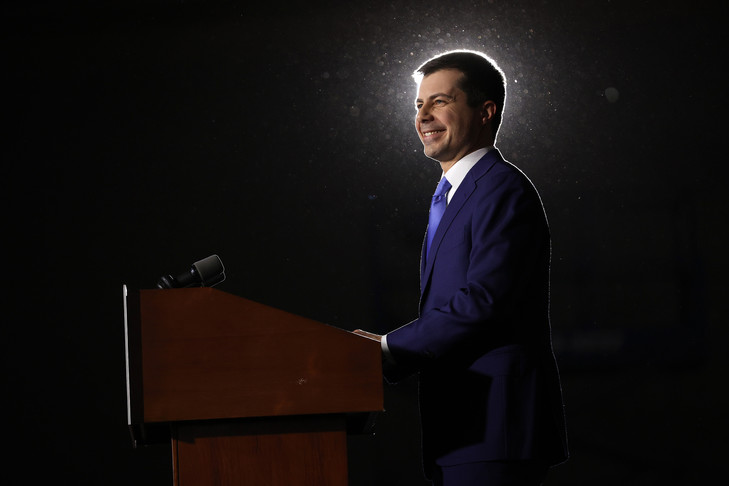 A nobody only a few months ago, then leading after the Iowa caucus on Monday Feb. 3, Pete Buttigieg has become a sensation as the American primary season begins by winning the most delegates. An army veteran, Harvard graduate and openly gay, the young candidate has many arrows in his quiver.

“A president seeming to be speaking to his own base at the very moment when we look to a president to speak to all Americans […] to remind us of our highest values. I think it was a missed opportunity from the president to do that,” Pete Buttigieg said on NBC, reacting to Donald Trump’s State of the Union address before Congress on Tuesday Feb. 4. One of the most important television stations in the United States expected this reaction from the Democratic candidate, who was unknown to the general public a few months ago, at the end of the president’s speech. Buttigieg has established himself as a key candidate in the Democrat primary race by winning the most delegates, with 26.8% of the vote in the Iowa caucuses on Monday Feb. 3. According to the still incomplete results, he is running neck and neck with Bernie Sanders, who won the most votes, strongly surpassing Elizabeth Warren and Joe Biden.

On Equal Footing with Joe Biden

The Democratic youngster has managed to cause a sensation. He was topping the polls in Iowa in November but had since fallen behind the other three major candidates. He should be able to take advantage of this success for the rest of the campaign. “It’s a bit unfair, but having a good score during the first caucuses sets up a very good dynamic, even if Iowa is a small state with a small population,” points out Laurence Nardon, head of the North America program at the French Institute of International Relations. “On the other hand, Joe Biden risks being put at a disadvantage by his sharp fall. The two candidates run along the same themes and speak to the moderate wing of the Democrats. There was something of a principle of communicating vessels between the two,” the researcher said.

Painting the Picture of the ‘Perfect Son-in-Law’

The youngest president and openly gay? Buttigieg is waging a daring bet: At just 38, he would become, if elected, the youngest president. “He appeared in politics only recently but, so far, he has been running an excellent campaign. He is a very good speaker and with his crisp white shirt, he’s playing the part of the perfect son-in-law,” Nardon said. The Harvard graduate, son of a Maltese immigrant father and an American mother, is also a musician and speaks eight languages (English, Norwegian, Maltese, French, Spanish, Italian, Arabic and Dari). He is a practicing Christian, “an ever-important point for many Americans,” said Nardon.

Moreover, he does not hide his love for Chasten Glezman, the teacher he married at the Cathedral of Saint James in South Bend on June 16, 2018. “But he does not wear his homosexuality on his sleeve,” Nardon points out. “What he shows of his private life is very tidy.” The couple announced they would start a family if Buttigieg became president. He is the image of seriousness reinforced by his veteran past. The young man served seven months in Afghanistan in 2013. According to Nardon, the political science professor, his past and his personality allow him to garner the support of more progressive voters without losing the more conservative branch of Democrats, notably the African American minority — with whom relations are delicate, unlike with Joe Biden, Nardon says. This has been particularly true since June 2019, when a black man, Eric Logan, was killed by a police officer in South Bend, the city where Buttigieg served as mayor for eight years. South Bend’s African American community criticized him for not immediately taking a stand.

Off on the Right Track with a Moderate Democratic Program

Concerned about environmental conservation, Buttigieg supports the Green New Deal, a program to invest in low carbon energy, also endorsed by the young Democratic Rep. Alexandria Ocasio-Cortez. He is in favor of bringing in a carbon tax and blocking new permits for the exploitation of hydrocarbons, including offshore drilling.

Buttigieg’s agenda could allow him to go the distance, according to Nardon, “especially since he is very, very well financially supported,” the researcher highlights. In the last quarter of 2019, he is thought to have brought in $24.7 million dollars, which would be the second largest fundraising result of this period.