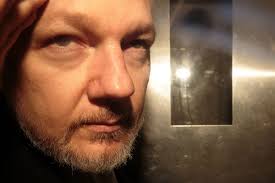 Since Monday, the extradition of WikiLeaks founder Julian Assange, accused of espionage in the United States, has been underway in a London courtroom. Assange is accused of having published confidential documents describing war crimes committed in Afghanistan, Iraq and Guantanamo in the most important newspapers in the world, including El Comercio.

Assange, as a journalist, should be protected under the First Amendment of the U.S. Constitution, which provides for freedom of the press. But in order to charge him, Washington dusted off a 1917 law that sanctions acts of interference with U.S. foreign relations, defining them as espionage. It is a law that could apply, for example, to U.S. soldier Chelsea Manning, who provided the documents to Assange.

Apart from whether Assange is a hero or a villain — the mainstream media has distanced themselves from him since 2011, when WikiLeaks began publishing thousands of unfiltered documents — he deserves fair treatment. Not only is it a fundamental human right, but also because this trial will be used as a strategy to intimidate the press.

The Australian faces a sentence of up to 175 years in prison if the British judge decides, not on his culpability, but in favor of the demand for extradition. The latter focuses exclusively on the disclosure of documents from 2010, which the mainstream media agreed to publish in line with their duty to inform.

The recent Brazilian Public Agency interview with Nils Melzer, the U.N. special rapporteur on torture and other cruel, inhuman or degrading treatment or punishment — who claims that Assange has been politically persecuted by the United States, the United Kingdom, Ecuador and Sweden — is quite enlightening. Melzer’s file shows that the campaign to manipulate public opinion on the Assange case began in Sweden in early August. At the end of July, “The Afghan War Diary,” one of the largest information leaks in history, was published. According to Melzer, the United States demanded that its allies allege a load of criminal charges against Assange.

The Swedes jumped on the opportunity when two women showed up at a police station to inquire if it was possible to require Assange to take an HIV test, because both had participated in consensual unprotected sex with Assange.

When the police spoke to them about rape, they refused to sign the accusation. One of them wrote to a friend that “it seemed they were setting a trap for Assange.” The Swedish government took the case, ex officio, but, surprisingly, it was filed nine years later, when the U.N. rapporteur requested information about it.

The United Kingdom would have preferred that the Swedish prosecution continue to get rid of the Assange case. Assange would have been taken into custody at the Ecuadorian Embassy and extradited to Sweden to stand trial for rape. Now, the British judge has the painful task of deciding not only a man’s fate, but the right to information that underpins any respected democracy.