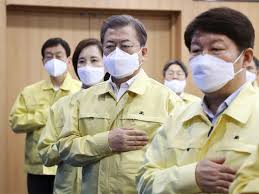 On Jan. 27, a senior infectious disease official from the South Korean government summoned the country’s top 20 medical companies to a meeting. He told them that they urgently needed to develop an effective test to diagnose coronavirus infections. At the time, there were only four infected people in the country, but neighboring Wuhan was a clear warning of what the future might hold.

Seven days after that meeting, the Korean government approved one of the options that was presented. Seven weeks later, Korea had implemented more than 290,000 tests in a country of 52 million inhabitants, and detected 8,000 cases of infection.

Korea had also reduced the incidence of daily cases from 9,009 to only 93. In other words, South Korea had flattened the contagion curve at its start, before it exploded.

The hidden number of those infected in the United States could be enormous. If only 30% or of the population – about 96 million people – the number of deaths in that country could reach 480,000, as I wrote yesterday in this space, according to a study by Dr. James Lawler, an expert from the University of Nebraska, as reported by The New York Times.

The comparison of the Korean and U.S. situations comes from a special report produced for Reuters World News, by Chad Terhune, Dan Levine, Hyunjoo Jin and Jean Lanhee Lee.

The fundamental difference in the two countries, and perhaps among all those fighting the pandemic, is the speed with which countries begin to measure the damage.

Mexico is behind in this regard, and is even pushing back. One could read the following notice yesterday at a prestigious private laboratory: ”By order of the Ministry of Health, at present, we cannot perform the coronavirus test (COVID-19). As soon as we are authorized, we will resume this service.”