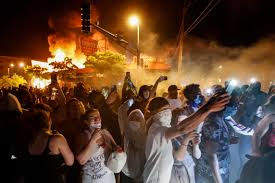 It turns out, as many good and concerned citizens of the United States affirm on network news, that those hundreds of thousands of people who in recent days protested on the streets of the major cities of the empire are vandals, criminals, looters and communists!

It turns out that now they are afraid of the reactions by those they have walked past one day, every day, not only refusing to offer a handout, but crossing the street or swerving their cars just a bit to avoid hitting them — as they might try to avoid killing a dog. For a long time, they just ignored them. But they were there.

It turns out that for years those thousands (millions?) slept on floors, in dilapidated buildings, in gutters and in suburban parks. They ate leftovers, crumbs, from handouts and by stealing. They stole to eat and feed their children. They trafficked with what they could. Their most lucrative business came from drugs others brought from far away or that they, themselves, manufactured at home. They used those drugs, yes, but they sold much more on the darkened streets, outside schools and in those same abandoned buildings. Where they always were. And no one saw them.

It turns out that they were black, many were black — but also many were white, Asian, Arab, “Mexican” — and poor, very poor! They were welcomed into the country of the American dream and then abandoned to their fate without a return ticket in their pockets or in their souls, without the passport of any flag: the homeless, the homeless whom no one wanted.

It turns out that many of them, risking their lives on rafts in stormy waters in the hands of mafia killers at the border, arrived when they were still people, when they could. And they worked the hardest jobs, the jobs of slaves. They were — and millions continue to be — the invisible teeth in the gear that moves the machinery where only bank accounts have value. They are disposable. They do not speak, they do not look you in the eye. They were born to serve; in the military, serving even better by saying “Yes Sir!” But always waiting for their moment.

It turns out now that minorities are the majority. Those marginalized by society, those who were left to save themselves if they could, those deceived by a dream that was never for them, are on the streets where they have been for years with their frustration, with their miserable lives, with their curable diseases and their addictions. Under the floors, under the sewers, under the boots of their owners and the complicit gaze of all the others. And those true thieves of the American dream, now and only now, seem to notice the danger in front of their eyes.

It turns out that once again, the government propaganda machine made in Hollywood will try to put “order” in those brains indoctrinated by years of banality: Three or four policemen do not symbolize racism, the Ku Klux Klan never existed, Martin Luther King Jr. did not have a dream when he was assassinated, the Black Panthers and African American movements for equality and civil rights are the result of Soviet influence, and the Bronx is just a slum.

It turns out that Barack Obama was an accident that should not be repeated, the twin towers were destroyed by the Arabs, COVID-19 was invented by the Chinese who will kill themselves with anything. Donald Trump is a great president, so let’s all go golf and vote for him … You can fly into space … George Floyd died of a heart attack … Drink Coca-Cola and … Pay what you owe. God save America!