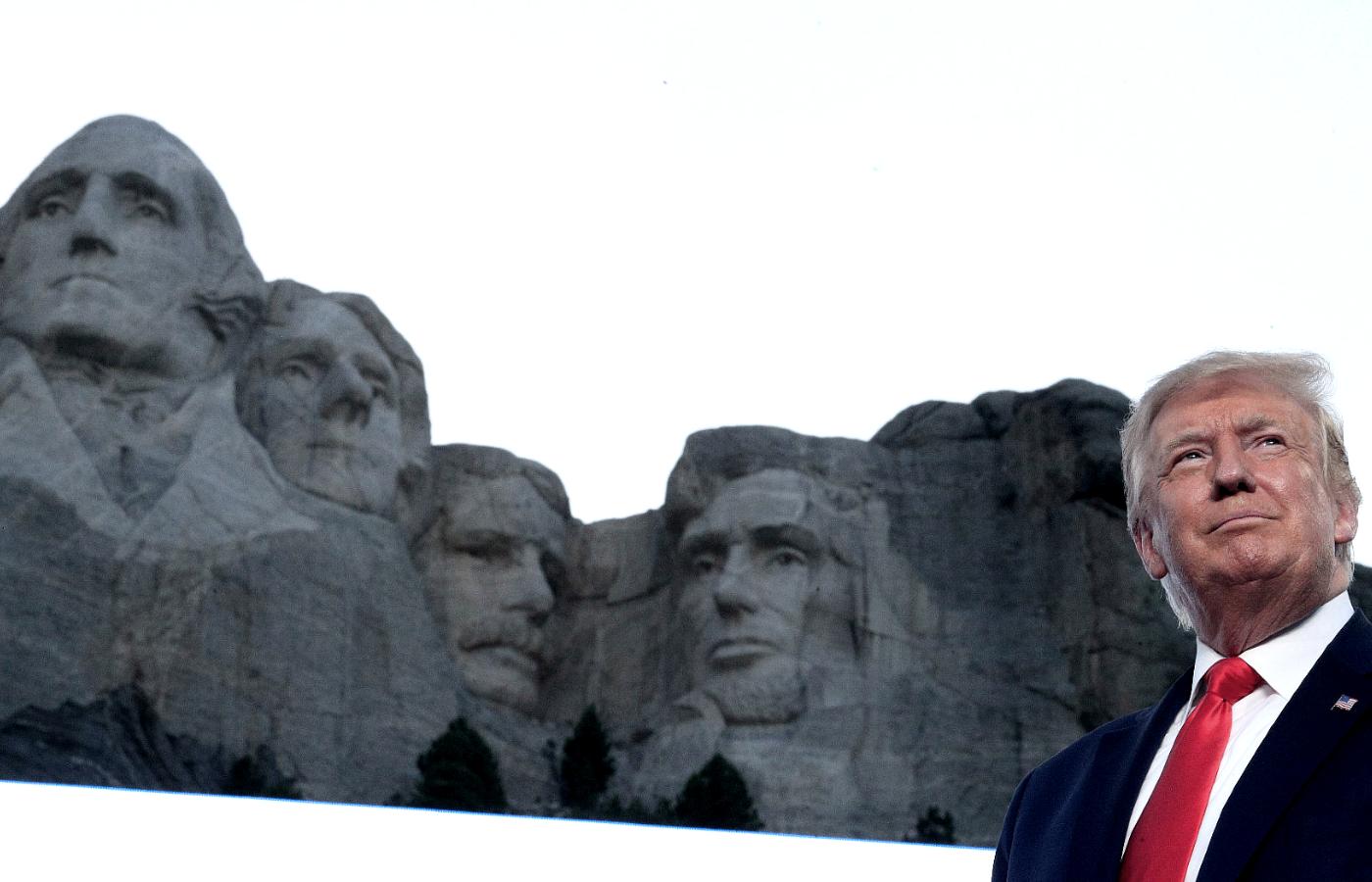 Trump has been playing this game a long time — deepening social division with threats about socialism and even totalitarianism, hoping that it will push opposition even further to the left.

On the eve of Independence Day, Donald Trump gave a speech at the foot of Mount Rushmore in South Dakota, unfolding an apocalyptic vision of the radical left taking over the U.S., a left which is supposedly trying to destroy the country’s cultural heritage. His speech at the mountain, which contains sculptures of four of the most important U.S. presidents — George Washington, Thomas Jefferson, Abraham Lincoln and Theodore Roosevelt — was a desperate attempt to regain support in the face of his declining record and the growing popularity of his presumptive Democratic opponent, Joe Biden, four months before the presidential election.

Trump devoted just a few sentences to the tragic pandemic in the U.S., focusing on street demonstrations that have now lasted for more than a month since the death of George Floyd in Minneapolis. Protesters have attacked the monuments of Confederate leaders who defended slavery during the Civil War (1861-1865), and demanded that authorities change the names of military bases named for the commanders of Confederate troops. Trump claimed that the extreme left is the driving force behind the protest movement, and described the movement as “totalitarian” and “fascist” because it calls for a radical revision of history that would blame white Americans for oppressing people of color. Trump thinks that the movement is teaching future generations to condemn and be ashamed of nation’s past.

“Make no mistake. This left-wing cultural revolution is designed to overthrow the American Revolution,” Trump said. He charged that the left wants to “defame our heroes, erase our values, and indoctrinate our children.” He also threatened that the destruction of monuments would be punishable by 10 years in prison.

It is not difficult to find similarities between Trump’s rhetoric and the election phraseology of the ruling party in our own country and right-wing populist politicians around the world. The manipulative practice of extending justified charges against radicals in the protest movement to the entire opposition sounds too familiar.

The radical branches of the Black Lives Matter movement go further than its mainstream participants. They make such extreme demands as tearing down the Washington and Jefferson Monuments, memorials to men, who, like each of America’s Founding Fathers, were slave owners, even though they created a modern republic without the use of a guillotine. The radicals also promote defunding the police and opening borders. The Democratic Party also promotes these ideas, especially its left wing, led by Rep. Alexandria Ocasio-Cortez. Yet Democratic leadership, including Joe Biden, definitely distances itself from the radical wing of Black Lives Matter. Meanwhile, the movement’s major issues are ending racial discrimination and prosecuting police for brutality, issues which have the support of the overwhelming majority of Americans.

By describing his opposition as a “fascist left” that wants to indoctrinate children and revise history, Trump, of course, is appealing to the most loyal fans of the extreme right, mobilizing them to vote in November. He also appeals to the open and hidden xenophobic and racist fears of a white majority that fears that it will lose its dominant position, and doubts whether the new, multicultural and multiracial America will remain a community or continue to cultivate conservative values. By intentionally igniting the fire of cultural war, the president naturally neglects such small matters like the fact that the Black Hills territory, home of Mount Rushmore, belongs to the Lakota Indian tribe, which protested the use of the lands they hold sacred for such a political speech.

Trump has been playing this game a long time — deepening social division with threats about socialism and even totalitarianism, hoping that it will push opposition even further to the left. He believes that this will convince most Americans that the country indeed faces danger from within that only he can defend them from. However, he forgets or denies the fact that the U.S. is in a deep health and economic crisis, as well as a moral crisis, because due to awareness that the U.S. is losing the fight against the pandemic, traditional American optimism and pride in America’s achievements is weakening. (In a country that accounts for 4.3% of the world’s population, America contains 25% of the global cases and deaths from COVID-19.)

Under these circumstances, society certainly does not want the civil cold war which Trump seeks, and does not want to deepen division any further. And certainly, society does not want to ignite a conflict on Independence Day, a day which the president used for a campaign rally. For that reason, it hard to say that Trump’s reelection strategy has any chance of succeeding.