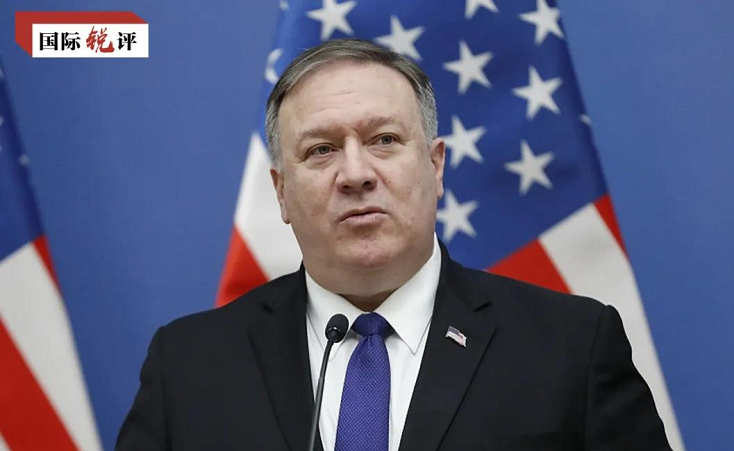 Secretary of State Mike Pompeo recently claimed falsely on social media that China’s economic development is based on a disregard for environmental protection. In response, a Chinese Foreign Ministry spokesperson said “Mr. Pompeo should take a good look in a mirror.” Indeed, America’s arbitrary withdrawal from the Paris climate agreement has seriously hindered the reduction of global carbon emissions, and the U.S. has been discredited in the international community. How does Pompeo have the cheek to make irresponsible remarks about the environmental problems of other countries?

Those who follow the Chinese economy must know that “green development” is a major keyword in bringing about China’s high level of development. In recent years, the emission of major pollutants in China has continued to decline and its ecological environment has significantly improved. In 2018, carbon dioxide emissions per unit of gross domestic product fell 45.8% from 2005; as of the end of 2019 the rate of environmentally friendly treatment of urban domestic waste in China was close to 99%. At the international level, China conscientiously fulfills its treaty obligations under the United Nations Framework Convention on Climate Change, the Paris climate agreement and the Basel Convention. It is a nation which has invested the most in renewable energy and has made positive contributions to global environmental governance.

Former U.N. coordinator in China, Luo Shi Li, has commented that China has played an important role in implementing the Paris climate agreement and has made remarkable progress in the development of its green economy. Vladimir Petrovsky, chief researcher of the Institute of Far Eastern Studies of the Russian Academy of Sciences, was deeply impressed by the welcome changes in China’s ecological environment in recent years, particularly since the 18th National Congress of the Communist Party of China. He believes that the Chinese government is actively implementing environmental protection policies while promoting economic and social development. This creates a “virtuous cycle” of production and a living environment “which is in line with a concept of nature that upholds a harmonious coexistence of man and nature.” Many international environmental experts have also pointed out that it would be worthwhile for countries to study and refer to China’s experience in building an ecological civilization.

Pompeo ignores China’s green development practices and the international community’s fair assessment of how China has actively met its international obligations. By insisting on smearing China is to cover one’s misdeeds by shifting the blame onto others. The United States, a major emitter of global greenhouse gas, announced in June 2017 that it would withdraw from the Paris climate agreement, rejecting its own binding and quantifiable emission reduction obligations, and seriously hindering global emission reduction and the promotion of green and low-carbon development and related processes. The U.S. is the world’s largest exporter of waste, and transfers a large amount of it to developing countries. While it enjoys its own crystal clear water and green hills, it forces environmental disasters onto other countries and causes great harm to the global environment. During Pompeo’s visit to Europe in mid-August, Austrian President Alexander Van der Bellen personally expressed his regret that the United States had withdrawn from the Paris climate agreement. However, Pompeo, the lying, uncompromising chief diplomat, didn’t care, and instead attacked and discredited countries that have made positive contributions to green development, steadfastly driving America’s international credibility to new lows.

In fact, since the current U.S. administration took office, it has repeatedly used this trick of breaking promises and withdrawing from organizations to play the bully in areas beyond the environmental field. People have seen that after withdrawing from the U.N. Human Rights Council, the U.S. made every effort to block Venezuela’s election to it. Consequently, Venezuela was elected by 105 votes, which demonstrated how the mainstream international community felt about the matter. After announcing that it was withdrawing funding from the World Health Organization, the U.S. still tried to dominate proposals by the Group of Seven major industrial nations WHO reform, which led to Germany and France’s indignant withdrawal from the relevant negotiations. After pulling out of the Iran nuclear deal, the U.S. demanded activation of a “snapback” mechanism for sanctions which can only be activated by parties to the deal. Members of the U.N. Security Council and the international community resisted this demand.

There are many other similar examples. As analysts have pointed out, in order to maximize political self-interest, a very small number of U.S. politicians represented by Pompeo have adopted a policy of either making use of, or rejecting, nearly all major international agreements. This does serious damage to international fairness and justice as well as global peace, stability and development. The United States’ untrustworthy, rude and unreasonable behavior has been widely criticized even by their allies. It is said that an unjust cause finds little support; this is the road the U.S. is increasingly advancing on. It is laughable that Pompeo still proudly believes he can speak for the international community while he stages one political farce after another, written and directed by himself. It is really absurd!

Pompeo’s management of foreign policy has led to the United States suffering its heaviest diplomatic losses in decades. On Aug. 30, The Washington Post website published an article entitled, “Mike Pompeo Is the Worst Secretary of State in History,” criticizing Pompeo for pushing U.S. foreign policy toward a dead end and leaving the U.S. visibly isolated. The article hit the nail on the head, pointing out Pompeo’s ambitions are likely to be locked on the 2024 presidential election and that his career as the worst secretary of state in history is at its peak.

I would urge Pompeo to read this article and open his eyes to the plight of the American people. More than than 6 million people have been diagnosed with COVID-19 during the current pandemic, more than 1 million Americans a week have applied for for unemployment benefits for months, and there are waves of anti-racism protests taking place across the United States. Will smear tactics regarding China solve these burning problems? Can he fool the American people? If Pompeo, focused on personal gain, doesn’t wake up soon, he will inevitably be pilloried by history.