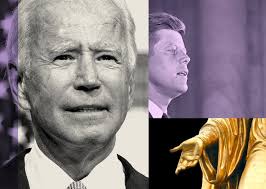 In 1928, Al Smith was demonized as the Antichrist, while also being accused of wanting to establish a secret tunnel between the White House and the Vatican, and lost the presidential election. In 1960, John F. Kennedy was elected only after guaranteeing that his loyalties lay with America and not with the pope. Now, Joe Biden has won the election and the fact he is Catholic was given little attention, even though he is only the second Catholic to become president in almost 2 1/2 centuries.

A review of American history is helpful here. It is calculated that in 1776, when the Founding Fathers signed the Declaration of Independence written by Thomas Jefferson, Catholics made up no more than 1% of the population. British colonization had naturally attracted Anglicans, followers of the king’s official religion, but also a multitude of Protestant sects from the Old World. Catholics began to become visible only in the 19th century, with Irish and German immigration. Later, in ever greater numbers, came Italians and Poles, as well as the Portuguese. The 20th and 21st centuries, in turn, saw the rapid increase of Latin Americans. The result is that today, one fourth of 330 million Americans are Catholic, and the United States now ranks fourth in the list of countries with the largest Catholic populations, behind Brazil, Mexico and the Philippines, but ahead of Italy and France.

Biden, the winner on Nov. 3, regularly attends church on Sundays and sometimes on other days, too. When he was vice president under Barack Obama, Biden met Pope Francis (and before him, Pope Benedict), and they seem to have taken a liking to each other, the pope being among the first world leaders to congratulate him on his recent election. However, as The Washington Post noted days ago, when “Joe Biden goes to church. Politics remains outside.” Indeed, while still a senator, his encounter with John Paul II became famous when he avoided kissing the papal ring, following the advice of his Irish-American mother, who had always taught her son that no one was above him, be they the pope or the queen of England.

According to the Associated Press, Catholics in the recent election split down the middle in their support for Donald Trump and Biden, 49% to 50%. Because a Protestant like Trump captured 60% of the Catholic vote in his race against Hillary Clinton in 2016, it is tempting to conclude that the Democratic Party gained ground precisely because it featured a Catholic candidate; but we shouldn’t rush to conclusions. Not only did this election witness a record turnout of voters, but Trump was also no longer an unknown commodity. In addition, Biden was able to build a far greater sense of consensus among the party’s factions than the former first lady (and former senator and secretary of state).

Biden’s affinity for far-reaching social policy initiatives — Obama’s health care reform stands out as one of the great legacies of his eight years serving with Obama — and his tolerant views on immigration bring him into alignment with the pope’s views, but Biden, nonetheless, does not shy away from defending abortion rights, something which places him at odds with the Catholic Church. When it comes to the death penalty, the new president’s thinking has evolved since the days when, as a senator, he was convinced of its value as a deterrent in fighting crime. And now, at the very least, he does not share Trump’s enthusiasm for executions, and seems to be adopting a position that comes close to abolitionism, a position that successive popes have advocated.

A man of faith, therefore, and certainly one with a complex relationship with his faith, given the family tragedies he has endured, Biden will be a president who happens to be Catholic and not a Catholic president. The new sense of normality around this issue, after the traumas of the 1928 and 1960 elections, may also have benefited from the 2004 candidacy of John Kerry, himself a Catholic.

As the first major party Catholic candidate for president since 1960, Kerry ran a conventional campaign, with religion very much in the background (and with more attention paid to his millionaire wife, the Portuguese-American Teresa, widow of a Heinz food magnate). His defeat by George W. Bush was likely a result of the patriotic post 9/11 climate that favored the incumbent president. Not even the evangelical groups most fervently opposed to the pope were able to rile the masses with thoughts of the Antichrist, then or now. An increasingly pluralistic America is no longer frightened by these distinctions, even if most, and particularly the elite, can still be identified as WASPs, the English acronym for white Anglo-Saxon Protestants.

Curiously, although it has taken a while for Catholics to be seen as regular White House occupants, their presence has been quite evident on the Supreme Court for a number of years. All we need do is reflect on the fact that six of the nine justices, including two nominated by Trump, are Catholic.

A Supreme Court with conservative lifetime members is a certainty, and we know it will continue to influence American lives long after Biden’s presidency (regardless of whether he’s in office one or two terms), but we also know that neither will be accused of building a secret tunnel to the Vatican.