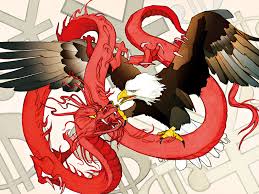 Even though the current U.S. administration is on its way out, it nevertheless is deliberately poisoning the U.S.-China relationship. On Dec. 7, the House of Representatives passed a bill related to Hong Kong, stating that Hongkongers would be “welcome” to temporarily reside in the United States, attempting to paint America as some beacon of human rights. According to this bill, Hong Kong citizens would be allowed to live in America for a period of five years with the ability to work and without the threat of deportation. On the same day, the Treasury Department placed 14 Chinese Communist Party members on its sanctions list for undermining “Hong Kong’s autonomy and democratic processes.”

America’s anti-Chinese actions have reached a frenzied state. Last week, the State Department announced that it would prevent CCP members and their families from entering the country, terminated five programs promoting dialogue between the U.S. and China, and sanctioned members of the United Front Work Department. The Defense Department even blacklisted four more Chinese companies. It is evident that America views the U.S.-China relationship through the outdated lens of the Cold War, stubbornly behaving like a 21st century Don Quixote. America is acting contrary to the norms of the times and its actions are prompting much-needed reflection, for its current trajectory can result in nothing but a dead end.

Even though U.S.-China relations currently face significant difficulties, both sides undoubtedly have numerous shared interests and much room for cooperation. Biden’s team has said clearly that the new administration will be particularly focused on four major tasks: pandemic control, economic recovery, climate change and racial justice. In every area except for racial justice, China and the U.S. see eye to eye. America cannot resolve these issues without China’s help. China is calling out that it can find areas of cooperation in shared efforts to control the pandemic, speed up economic recovery and fight climate change.

Cooperation benefits both nations; fighting rewards none. Cooperation is the only way forward. The world is taking notice. Recently, China proposed several goals for the future development of U.S.-China relations. On Dec. 7, Foreign Minister Wang Yi announced that “China and America should work together so that in the next stage of our relations with each other, we may restart discourse, reorient ourselves on the correct path, and reestablish confidence in one another.” Prior to this, the Chinese ambassador to the United States, Cui Tiankai, stated that if the United States is willing to reverse actions such as the closure of the Chinese consulate, China is willing to meet America halfway. Chinese Vice Foreign Minister Le Yucheng also announced that “China and the United States have no reason to reject a win-win future.”

There is global consensus that breaking the ice and reestablishing U.S.-China relations will be a difficult task. On one hand, the American government is sparing no effort to obstruct relations between the two nations in a vain attempt to hold on to its superior position in global politics. Biden’s team faces the threat of falling into the trap set by the Donald Trump administration. On the other hand, Biden’s team may have some inner demons of its own regarding China, viewing U.S.-China competition strictly as a zero-sum game, causing dissension about issues such as human rights and trade, and forming a global alliance against Chinese interests.

China wishes to maintain good relations with the U.S., but not without conditions. China would not be the first to provoke the United States, but we will actively safeguard our own interests. It is also unrealistic for the U.S. to expect China to go out of its way to bend to U.S. interests, yet China is uncomfortable with the current tension. The responsibility rests entirely with the United States.

As some media outlets accurately comment, China welcomes a policy reset with the Biden administration, but it is unlikely to change its internal practices. Most poignantly, we hear the media say that Washington policymakers can learn to coexist with a powerful China, and they must learn.