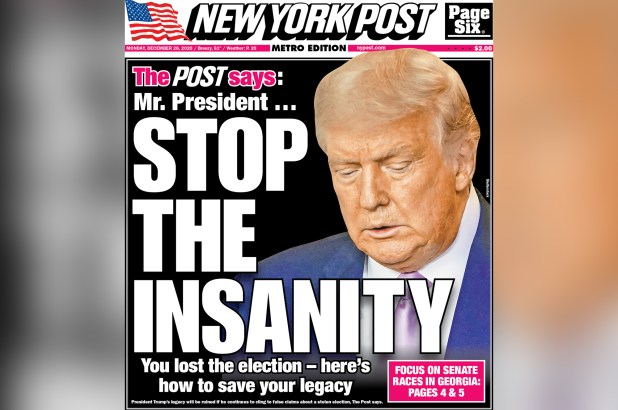 Even Republicans know that Trump’s time is running out. While the president has effectively stopped governing, his party is trying to prevent him from causing irreparable damage.

At the beginning of the week on the front page of the New York Post, you could see that even Donald Trump’s closest allies are gradually breaking away from him. The headline in large letters next to an unflattering image of the U.S. president read, “Stop the Insanity.” Under this in smaller letters, but no less clearly, was this: “You lost the election.”

The New York Post belongs to Rupert Murdoch’s media empire and it had long been Trump’s favorite newspaper. Before Trump was president, but instead just a dodgy real estate businessman, one of his greatest joys was to share insights into his life with the newspaper. Even during the four years of his presidency, the New York Post stood loyally by his side. However, now Murdoch has apparently had enough of Trump’s antics and has ordered the attack.

Among the antics is the fact that Trump still refuses to acknowledge that he lost the election. Hardly a day goes by that Trump doesn’t complain on Twitter that he was cheated out of his victory, even though there is not even a hint of proof of any irregularities in the election. He doesn’t care that in doing so, he is undermining trust in democracy. If what Trump is doing here weren’t so dangerous, it would be laughable in a pitiful way: the loser who in childish defiance clings to the fiction that he actually didn’t lose after all.

Trump has effectively stopped governing since the beginning of November. He’s spending a lot of time at his golf courses, watching a lot of television and tweeting often. It has not crossed his mind to help successor, Joe Biden, with an orderly transition, and his party only succeeded in moving Trump to sign a multibillion-dollar coronavirus aid package after great difficulty.

The Good News: About 3 More Weeks and Trump Is No Longer in Office

Republicans and Democrats negotiated this package together, and it is one of the few bipartisan initiatives in recent years. For millions of Americans, it is of existential significance. Trump ignored this process and eventually even threatened not to sign the bill. Because Republicans know their president, they reacted cautiously. How do you get Trump to do something? You stroke his fragile ego.

That’s why Sen. Lindsey Graham traveled to Florida to golf with Trump, and a group led by Treasury Secretary Steven Mnuchin got on the phone to explain to Trump how good he would look if he signed the bill: Trump, a helper in need. Mnuchin also assured Trump that, yes, of course he actually won the election. It sounds all too transparent, but it worked once again. Trump signed the bill and announced that he had done so. In return, Congress promised him that it would once more focus on the issue of election fraud.

Presumably, Congress won’t actually waste a minute of its time on this issue. Even Republicans know that Trump’s time has run out. They’re lulling their leader into a sense of security that the party will continue to stand by his side while it tries to prevent him from causing irreparable damage in his last days. That is the good news these days. About three more weeks and it’s over.

About Michael Stehle 36 Articles
I am a recent graduate of the University of Maryland with a BA in Linguistics and Germanic Studies. I have a love for language and I find translation to be both an engaging activity as well as an important process for connecting the world.