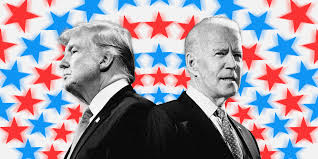 For the first time, Joe Biden speaks with citizens on CNN as president of the United States. The topics are the COVID-19 pandemic and the economy, but the headlines revert to Trump.

Whether it was a coincidence or coincidentally well planned, Donald Trump managed to thwart U.S. President Joe Biden. Biden had departed on his first important official trip. He had flown to Wisconsin to conduct a prime time town hall live on CNN. But before the new president could speak about his COVID-19 strategy, his predecessor in the White House made himself heard. And Trump did what he is certainly among the best at doing: He attacked his opponent.

In this case, his opponent was named Mitch McConnell. For a long time, the Republican minority leader in the Senate was a friend of Trump, not an enemy. But after the lost election, their relationship gradually cooled. Now, after the unsuccessful impeachment trial against Trump, it is frosty. McConnell may have voted to acquit him, but afterward he declared Trump morally responsible for the storming of the Capitol on Jan. 6.

Trump does not let something like that slide. In a statement on Tuesday evening, he demanded McConnell’s removal, called him a “dour, sullen, and unsmiling political hack,” and said that he would destroy the Republicans in the Senate. After being acquitted, Trump is apparently not willing to give up his influence on the party in favor of his golf game. The power struggle among the Republicans will probably now erupt publicly. Even a splitting of the party is no longer out of the question.

Biden will have to live with the occasional Trump headline in the future, too. He himself does not want to contribute to that, though. He said so publicly in Milwaukee, where he stood on a theater stage together with CNN moderator Anderson Cooper. Just a handful of citizens were seated in the audience and posed questions. “For four years, all that’s been in the news is Trump. The next four years, I want to make sure all the news is the American people,” he said. But the problem with this wish is not just that Trump can still influence the headlines with his behavior. It’s that Biden’s greatest task is dealing with a crisis that Trump left behind for him.

The citizens’ questions focused on the COVID-19 pandemic and how the country could finally overcome it. It was very obvious that, for the Americans who were given the opportunity to speak, CNN had not just chosen a diverse group, but had also prepared their questions. A little more authenticity, like the town hall format promises in its original form, would have been nice. But spontaneity is dangerous on live TV.

Feel-Good Programming instead of Winter Storms

Thus, the sometimes stilted questions addressed the vaccination strategy, the planned $1.9 trillion COVID-19 aid package and when social distancing would finally be over. They were questions that Americans call softballs — gently thrown, easy to answer. Biden had no trouble finding the right words. It may not have been his best performance with respect to eloquence and decisiveness, but he also did not need to deliver a top performance to repeat what is already well known.

Six hundred million vaccine doses will be made available by July and it is time, he said, to harness a lot of money for COVID-19 relief, a package which has yet to be finalized. No, Americans should not be waiting in line for an hour or more because they do not have enough money for groceries. Yes, he supports a federal minimum wage of $15, but wants to reach it step by step. In these first weeks of his presidency, Biden is concerned with assuring the people that there is now a president in the White House who takes care of things. Of course, Biden promised the mother who was concerned about the vaccination of her son with chronic lung disease that he would take care of it personally.

The Honor of the Office

Biden’s response to his country’s polarized state was to be honorable, treat each other well, find commonalities. Biden said 67% of the population supports his COVID-19 plan. If his presidency is to be successful, Biden will need to see that he also makes that plan happen.

A viewer could sleep peacefully at the end of the hour. There were no vexations or misfires. No one discussed that on this evening, millions of Americans could not watch the feel-good programming because, after strong winter storms, they were without power, in some cases for more than a day. But it should have been addressed; there’s a need to talk about climate change and infrastructure in the U.S. and to take a look at reality. The situation shows that in Texas, for instance, one of the most energy rich states in the country, there is not enough electricity for everyone the minute the weather deviates from normal patterns.

But the topic would probably have dampened the mood too much and raised too many complicated questions. Cooper thus preferred to ask in closing what it felt like to be in the White House as president — a feel-good question. That allowed Biden speak again about the honor of the office and preparation of the Oval Office. More is needed for the headlines that Biden is hoping for.