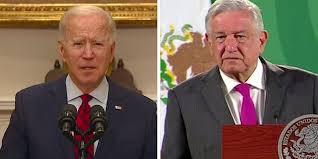 The first virtual meeting between U.S. President Joe Biden and Mexican President Andrés Manuel López Obrador took place amid what some consider to be a difficult time in this bilateral relationship. But the reality is that it’s never been simple, or easy, between Mexico and the U.S. Not even when they’re in what’s considered to be a good phase.

The two governments are obliged to reach an understanding. Against all odds, social and economic integration between the two countries is growing, and their proximity and political relationship mean they must consider each other’s needs.

In addition, the two governments currently have domestic needs that are forcing them to seek mutual arrangements.

Proximity and mutual convenience are powerful incentives for better cooperation, with the COVID-19 pandemic serving as an immediate example. It doesn’t make sense for the United States to try and resolve its domestic health situation without also supporting similar efforts by its neighbor to the south with whom it has strong links, at least while it is able to, and while vaccine supplies allow it.

Biden is proposing immigration reform, but he needs Mexico’s help, not only in its role as a necessary route for thousands of people from Central America, but also to help other nations in the region.

There are also subjects that are somewhat less clear and more complex.

Donald Trump’s recently ended four-year term has given rise to a political premise that made Mexico and Mexicans the symbol of all of the United States’ problems, from an “unfair” trade pact to the uncontrolled arrival of criminals and drug traffickers. The proposal to build a wall on the border with Mexico was one of Trump’s most popular subjects.

President López Obrador openly supported the new United States-Mexico-Canada trade agreement that Trump promoted, and toughened Mexican policy toward the entry of immigrants from Central America without documentation and caravans of asylum seekers in the face of threatened trade sanctions.

On several occasions, AMLO emphasized that Trump had respected Mexico’s sovereignty, and was one of the last heads of state to congratulate Biden after his election on Nov. 3.

The run-up to Biden’s arrival and his first weeks in office were punctuated in Mexico by legislative proposals aimed at strengthening Mexican sovereignty on issues ranging from the fight against drugs, to energy, to foreign investment in the environment.

But the legislature would be better off preparing a defense against the anticipated demands of the U.S. Congress and American interest groups with respect to specific aspects of the USMCA, such as compliance with American investment policy, especially in the energy industry, or working conditions in factories.