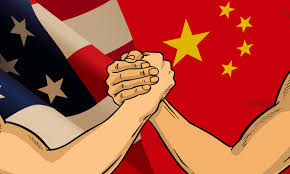 On the eve of the China-U.S. high-level strategic dialogue, the U.S. announced on March 17 that it had imposed so-called financial sanctions on some Chinese officials, falsely claiming that these officials had “reduced Hong Kong’s high degree of autonomy.” The U.S. has repeatedly and blatantly interfered in China’s internal affairs, talked irresponsibly about the Hong Kong issue, and unreasonably bullied Chinese personnel, to the indignation of the Chinese people and all those in the international community who have a sense of justice.

Not long ago, the National People’s Congress, with a large majority vote, decided to improve the electoral system of the Hong Kong Special Administrative Region. This manifested the common desire of 1.4 billion Chinese people (including our Hong Kong compatriots) to safeguard national security and peace in Hong Kong and to fundamentally preserve the political stability and security of the regime in the HKSAR. The purpose of improving Hong Kong’s electoral system is to ensure that the fundamental principle of “patriots administering Hong Kong” is effectively implemented and to prevent disruptive and anti-China elements in Hong Kong from exploiting loopholes in the current system in order to obstruct the administration of government or even seeking to seize the right to govern the region. How the HKSAR electoral system is designed and improved is purely an internal matter for China; no foreign country has the right to say anything about it. This action by the U.S. rides roughshod over international law and the norms of international relations, is wanton interference in China’s internal affairs and once again exposes its unreasonable and overbearing behavior and domineering approach.

Looking around the world, it is an internationally recognized fundamental political ethic that a country should be run by patriots. It is an internationally recognized principle that improving the electoral system of local government is an internal matter for a country, and other countries have no right to comment on it. The U.S. House of Representatives passed a bill amending election laws not long ago. One could ask, why can the U.S. amend its election laws as necessary but interferes so blatantly in changes to the laws of a special administrative region in China without hesitating to use the threat of sanctions? In the U.S., ordinary members of the public, when naturalized, must take an oath of allegiance to the United States to uphold its Constitution and its laws, as do those who hold public office. Why, I ask, does the U.S. interfere when China demands the loyalty of public officials to the state? Isn’t that a blatant double standard?

One-sided U.S. sanctions have no effect on China, and the “big stick” of sanctions doesn’t scare people. For a long time now, the United States, as the world’s dominant power, has been addicted to sanctions, frequently brandishing them as a weapon against the outside world. China is no longer a poor and weak country, and U.S. sanctions are nothing but a scrap of paper on Chinese soil. Fareed Zakaria, a leading current affairs pundit, said in a Washington Post commentary that the United States’ excessive reliance on sanctions will eventually backfire. Responding to the United States’ sanctions, the Hong Kong Monetary Authority has repeatedly stated that these are unilateral sanctions from a foreign government and have no legal effect in Hong Kong.

In the final analysis, the sanctions announced by the U.S. are part of the recent combined attacks by the U.S and the West to suppress China over the issue of Hong Kong. It fully exposes the fact that the U.S. doesn’t wish Hong Kong well, doesn’t want to see Hong Kong governed, and its ulterior motive and despicable ploy is to use Hong Kong as a pawn to curb China’s development.

The U.S. is sending the wrong signal to the outside world by being so overbearing just as the China-U.S. high-level strategic dialogue is about to be held. However, if the U.S. wants to use this to put pressure on China to try and take advantage of the Alaska meeting, it is also delusional.