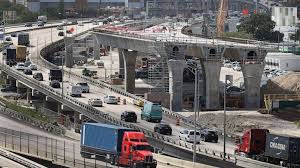 Over the next eight years, the new U.S. president wants to rebuild the United States’ dilapidated roads, power grid and bridges with an incomprehensible sum of $2 trillion. However, this will only work if Republicans cooperate.

If you want to experience how rundown the infrastructure of the United States is, you just have to take a taxi from John F. Kennedy Airport via Atlantic Avenue through Brooklyn to Manhattan. It bumps and bounces so much that small children have a fun ride in their car seat. Some potholes are knuckle-deep craters that turn cycling into one of the last great adventures in New York. On top of this is the tangle of above-ground power and telephone lines. They give you the sense that a moderate storm would be enough to disconnect entire regions from the outside world.

Of course the megametropolis of New York City is particularly strained, but the scene hardly changes inland either: Highways like ski moguls, bridges that hardly seem like they could support a tricycle and a rail network on which walking speed is often considered good passenger service.

For decades, the political powers in the United States have argued about how roads, bridges and the rails can be restored to the level of service of a 21st century industrialized nation. Anything more than emergency repair programs has rarely come of this. In his time in office, Donald Trump didn’t even try to get an infrastructure program off the ground.

Now, newly inaugurated President Joe Biden wants to change that. On Thursday, in the old steel and coal city of Pittsburgh, Pennsylvania, he announced a massive investment program. He wants to invest $2 trillion over the next eight years in order to create “the strongest, most resilient, innovative economy in the world.” He also has the goal of being able to stand up to China again.

Of the total amount, $620 billion is meant for transportation infrastructure, about $174 billion for the advancement of electric-powered transport, and $115 billion for the renewal of roads and bridges. Another $213 billion is planned for the preservation and construction of affordable housing, $100 billion for the expansion of high-speed internet in rural regions, and billions of dollars will be distributed throughout the country for climate action.

This is not a plan merely to apply a fresh coat of paint, Biden said. This is “the largest American jobs investment since World War II.” And this is just the first part of his innovation offensive. A social program worth about $2 trillion is still waiting on his desk. With that, Biden wants to strengthen the underdeveloped welfare system, fund free kindergarten and more tax breaks for families, and introduce mandatory paid sick days.

The United States is the largest economic power on earth. However, even it doesn’t pay sums like this out of petty cash, particularly since Biden just recently enacted a $1.9 trillion comprehensive COVID-19 relief package that is solely funded by borrowing. Biden promised not to further expand the enormous national debt of almost $30 trillion this time.

For Now, Biden’s Plan Is Just That: A Plan

That’s why he wants to raise taxes over 15 years. The corporate tax rate is set to rise from 21% to 28% over that period. Furthermore, multinational companies must be prepared for their international profits to be taxed noticeably higher than before. The taxation of international profits alone should bring in $1 trillion.

Biden could also raise the corporate tax rate even further. With an increase of seven percentage points, the jump seems enormous, but just two years ago, the Trump administration lowered the tax rate from 35% to 21%. Therefore, Biden’s plan doesn’t approach the past rate by a long shot.

Biden’s hope may be that Republicans will approve of the fact that he doesn’t want to completely reverse his predecessor’s tax breaks. However, first reactions suggest that he can’t expect many concessions. Republican Senate Minority Leader Mitch McConnell has already refused to go along. There will be neither tax hikes nor more national debt for McConnell.

Up until the late 1980s, infrastructure programs were considered absolutely bipartisan projects in the United States. However, the more the political camps have distanced themselves from each other since the Clinton era at least, the more fiercely they have argued over road and bridge construction. The biggest beneficiaries are mainly people in metropolitan areas, where Democrats mostly lead in elections. Republicans are feeling increasingly less inclined to use huge sums of money to fund future election victories for Democrats.

Additionally this plan includes corporate tax hikes and the massive investment in climate action that will probably upset the many Republicans who don’t believe in human-caused climate change.

Democrats have the majority in the House of Representatives, and Biden’s proposal will pass there without any big changes. However, in the Senate, the bill needs 60 votes to pass according to current Senate rules, but Democrats only have 50. Biden is depending on the support of at least 10 Republicans. He explained he is certainly open to discussion as long as the other side doesn’t propose a tax increase on annual income under $400,000.

So for now Biden’s plan is just that: a plan. Democrats were still able to get the COVID-19 relief package past Republicans and through the Senate with a legislative trick. This time that won’t be possible without difficulty. It remains to be seen whether Biden can get both sides to the table, and especially whether Republicans are prepared to compromise.