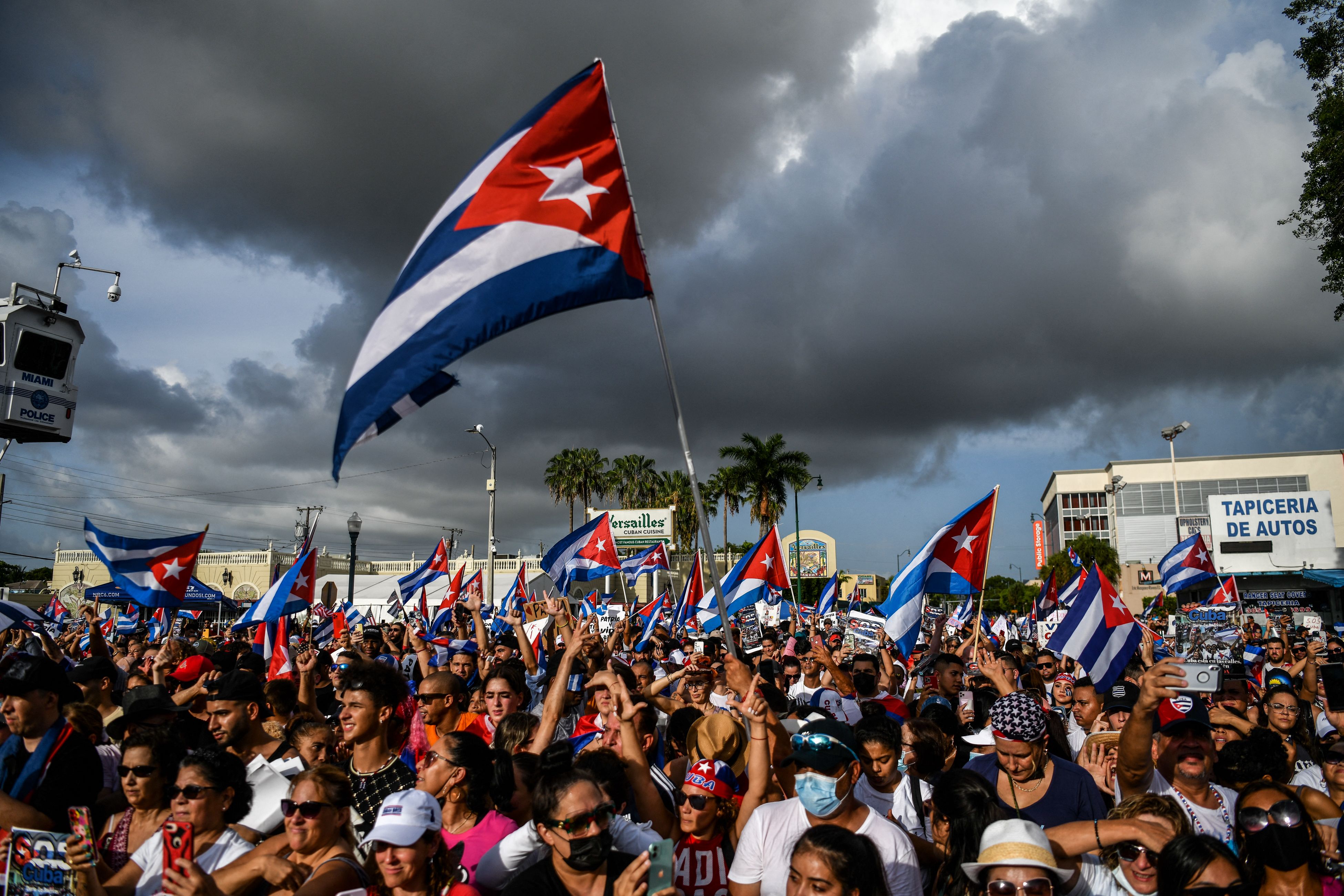 Cuba is restless. The protests that began in Havana quickly spread to all the cities of the island. Almost immediately, the street demonstrations began to be accompanied by the looting of shops, warehouses and various institutions.

Cuban President Miguel Díaz-Canel initially set out to suppress the unrest, with a state of emergency declared in several cities. The president also encouraged his supporters to take to the streets, promising to fight back against the protesters. However, by the evening of July 12, Díaz-Canel backed down, declaring that he was not striving for violent confrontation. Moreover, he called for a dialogue with the protesters.

The lack of clear signals from the power block of the Cuban government adds uncertainty to the situation. Perhaps this explains the hesitation of the current Cuban leader, who had lost his grip on the country’s situation long before the protests.

The Castro brothers and other Cuban Communist Party chiefs have all chosen Díaz-Canel to become the country’s leader for a reason. He personified change up to a certain point, even through small details like his dress and public behavior. He demonstrated “socialism with a human face,” as they used to say in the USSR. As the first secretary of the Provincial Party Committee in the Villa Clara province, Díaz-Canel shocked the public with his appearance — long hair and jeans instead of short hair and a formal suit.

Upon moving to Havana, he broke away from the rebellious fervor. And then it turned out that he was not such a driver of change.

The late Fidel Castro began to change the political and economic system of Cuba. His younger brother Raúl continued the transformation. Thus, the era of the New Economic Policy had begun on the Island of Freedom akin to its prototype developed in Soviet Russia 100 years ago, in quite a peculiar way. Private shops appeared everywhere, and the economy’s commanding heights remained under the control of the party. But, unlike the USSR, these strategic sectors were not in the metal industry or mechanical engineering.

Government revenues (the most important being currency) mainly came from specific agricultural exports, such as sugar and onions bought and subsidized by the Soviet Union, and tourism, both leisure and medical. The Cuban health care system built by Soviet specialists only partially worked to improve the quality of life for Cuban people. People from all over the world came to specially prepared hospitals to have surgery or receive better quality and much cheaper treatment than in Europe or the U.S.

The Americans could not take advantage of this option because of the long-imposed embargo, but there was also a loophole. The Cuban authorities regularly “rented out” their doctors — to Venezuela, Colombia, Ecuador and Mexico.

In the 1990s and 2000s, Havana was helped along by Beijing. But the Chinese Communist Party realized that investing in a distant Caribbean state was risky, and the Cuban communists began to think about improving relations with Washington.

In the second half of the 20th century, Cuba had a chance for sovereignty during the global confrontation between the two superpowers and ideologies. And in today’s world of fierce international competition, small countries have little room to maneuver, making peace with the U.S. an objective necessity rather than a choice.

In 2013, there were forecasts of an imminent deténte between Havana and Washington. In 2015, the “historic handshake” between Raúl Castro and Barack Obama took place. In 2016, Obama came to Liberty Island and held a joint press conference with the leader of the Cuban Communist Party. The countries resumed diplomatic relations, and several restrictions were lifted, including on family travel and Americans spending in Cuba. The latter was previously prohibited and punishable by a prison sentence by the strict embargo.

Fidel Castro Jr. continued the Cuban version of NEP developed by his brother and took various measures to liberalize life in the country. The internet was no longer banned. Facebook, Twitter and other global social networks have become available to almost all Cubans. The internet is expensive and very inconvenient — only a minority of the population owns computers and smartphones, and coverage is, to put it mildly, incomplete. However, connection is still legal and technically possible.

As the new Cuban leader, Díaz-Canel declared economics and defense as his priorities. However, the former began to fail from his very first day as president — a post created specifically for him.

Part of Diaz-Canel’s failure can be attributed to Cuba’s still lingering isolation and, partly, to the change of power in Washington. Donald Trump revoked most of the concessions granted to Cuba by Obama. The White House began to use descriptions like “inhuman Communist regime” referring to the island country. But the main problem that Díaz-Canel and the party chiefs who bet on him faced was a lack of expansion of economic ties with the U.S.

And then came 2020, the year of COVID-19. At first, the island’s isolation played into Díaz-Canel’s hands. The authorities coped well with rare cases of COVID-19 infection, but the tourism industry (including medical tourism) simply collapsed. The government’s reserves dried up as early as May 2021. Next, the pandemic wave engulfed Cuba, which Havana could no longer cope with. Despite the scarcity and inaccuracy of data from the Caribbean state, things are evidently going very badly. With the virtual collapse of the health care system came severe food shortages.

Of course, there is another factor that influenced the rapid spread of protests — the above-mentioned Internet. This is not the first time that Freedom Island citizens have taken to the streets. In August 1994, there was an anti-Castro riot in Havana. However, people outside the capital knew nothing about it or its harsh suppression. The state entirely controlled the media, and the World Wide Web had not yet entangled Cuba. Nowadays, everything is different.

Of course, whenever someone protests somewhere and even uses social media to stir up tensions, analysts direct their gaze toward Washington — isn’t the wind blowing from there?

Surprisingly, the White House responded with very general words about people’s rights to freedom and the inadmissibility of “any violence.” Thus, it seems that the events in Cuba came as a complete surprise to the current U.S. administration. Moreover, it was an untimely surprise.

But the Republicans acted very boldly, stigmatizing not only the communist regime of Cuba but also the American leadership. When U.S. State Department official Julie Chung tweeted that Cuban protests are mainly driven by the unstoppable COVID-19 wave, Sen. Marco Rubio immediately rebuked her, saying that her words were ridiculous and demanded the most decisive action from the White House in support of the protesters.

In Miami, Florida, almost more people took to the streets than in Havana. The demonstrators expressed solidarity with the Cubans in conflict with the Communist Party. Miami Mayor Francis Suarez even demanded immediate military intervention from Washington to “liberate the Cuban people.”

And there is the question — the choice between the different plans for Cuba forged by the two main American political parties. Either way, both forces see the future of Cuba under the U.S. protectorate. From a strategic perspective, this is inevitable. But the Republicans and Democrats have different approaches to establishing such a protectorate.

American liberals strove and continue to strive for the normalization of relations with the Communist Party and the gradual convergence of the Democrats’ left wing with the renewed Cuban leadership. In 2016, at a joint press conference, Castro and Obama agreed on almost all issues. Castro, in particular, declared his desire to fight climate change together with the Americans, and Obama praised the leader on his commitment to free health care. More so — Cuba even legalized same-sex unions.

Along the way, under Obama, the U.S. began to receive Cuban immigrants in Puerto Rico. Here, more progressive Cubans were meant to dilute the generally very conservative electorate of the unincorporated U.S. territory. And following the formation of the left-liberal electoral majority, Puerto Rico would have been made the 52nd U.S. state (the District of Columbia, most likely, will soon become the 51st).

This alignment categorically does not suit the Republicans and the very influential conservative Cuban-American community, represented in many states but primarily in Florida. For them, there can be no “normalization” of socialism, either in the U.S. or Cuba. Instead, they would want to see the immediate overthrow of the Communist Party. Naturally, then, the sons and grandchildren of people who fled from Castro, many of whom succeeded in their new homeland, will steer the development of the reborn island state and the political preferences of the inhabitants of Puerto Rico.

Therefore, it is difficult to suspect the current White House administration of organizing Cuban mass protests and stirring up further tensions in the country. On the contrary, observing Rubio’s stormy activity, it can be assumed that this activity is not carried out without the backing of influential Republicans and GOP sponsors.

One way or another, communist Cuba is doomed. Its leadership has fewer and fewer tools to keep the situation under control. Moreover, intervention on its side by any strong power (for example, China) will provoke an immediate military response from the U.S. Thus, the short-term prospects remain unclear — how will the current protests end? Neither are the mid-term ones — which U.S. party will manage the transition of power in Havana?

And so far, a lot depends on the Cuban authorities themselves. Washington is too busy with the Puerto Rican financial crisis and the instability in Haiti to even consider a significant intervention in the internal affairs of Cuba, too. However, the situation can change fairly quickly.