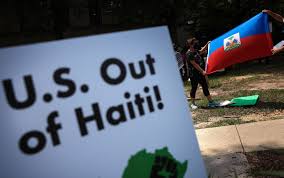 The resignation letter of U.S. Special Envoy for Haiti Daniel Foote, exactly two months after his appointment, marks a personal defeat for the ambassador, who was unable to make his views felt within the administration. But it also underscores years of failure for all American policies in Haiti.

A career diplomat does not make accusations like these in an official letter without considering the full measure of consequences, not just for himself but for those who appointed him to the post. Foote exposed the American game in Haiti, and the Biden administration has to conduct some major damage control now that the hornet’s nest has been stirred.

Foote’s letter says it all. There’s no need to say more.

Since the 2010 earthquake, not to mention the flood, American choices for Haiti have been catastrophic. Haiti’s choices for itself have been no less so.

The migrant crisis dates back to 2010. Hard-working Haitians grow more numerous every year in Latin America. How could American strategists not imagine that these workers would one day come knocking at their door, trapped as they are between a home country that is increasingly more difficult to return to, and host countries dealing with their own economic setbacks?

To weaken and allow Haiti to perish, ladies and gentlemen of America, is to attract its sons.

How could American strategists, as close as they are to Haiti, be unaware that their support of bad governance, their refusal to help stop the proliferation of violence and the spread of corruption could go on indefinitely without consequences?

Today, blind support for the excesses of President Jovenel Moise, as well as the flood, have brought about the collapse of every institution in the Haitian economy not just because these institutions are flawed or nonexistent, but because it will take years to set them right again.

Authorities with neither legitimacy nor authority are perhaps easier to manipulate, but this will end up costing Haiti, its allies, friends and neighbors, dearly.

The question is no longer knowing who among Jacques, Pierre, Jeannette or Marie will be the most submissive of Haiti’s leaders with respect to the needs of U.S. foreign policy, to the Dominican Republic or to Taiwan, but how to encourage authorities to make the good, tough decisions to turn around a country adrift.

Next week, with new doctors, the United States will announce a series of consultations designed to understand, diagnose and prescribe remedies for the Haitian case. Let us hope that the same causes will not produce the same effects. And that the same pathways, representatives and enthusiasm do not perpetuate America’s failure and Haiti’s shipwreck.

Because, yes, the U.S. has failed Haiti, a friendly country that is sinking like a stone.