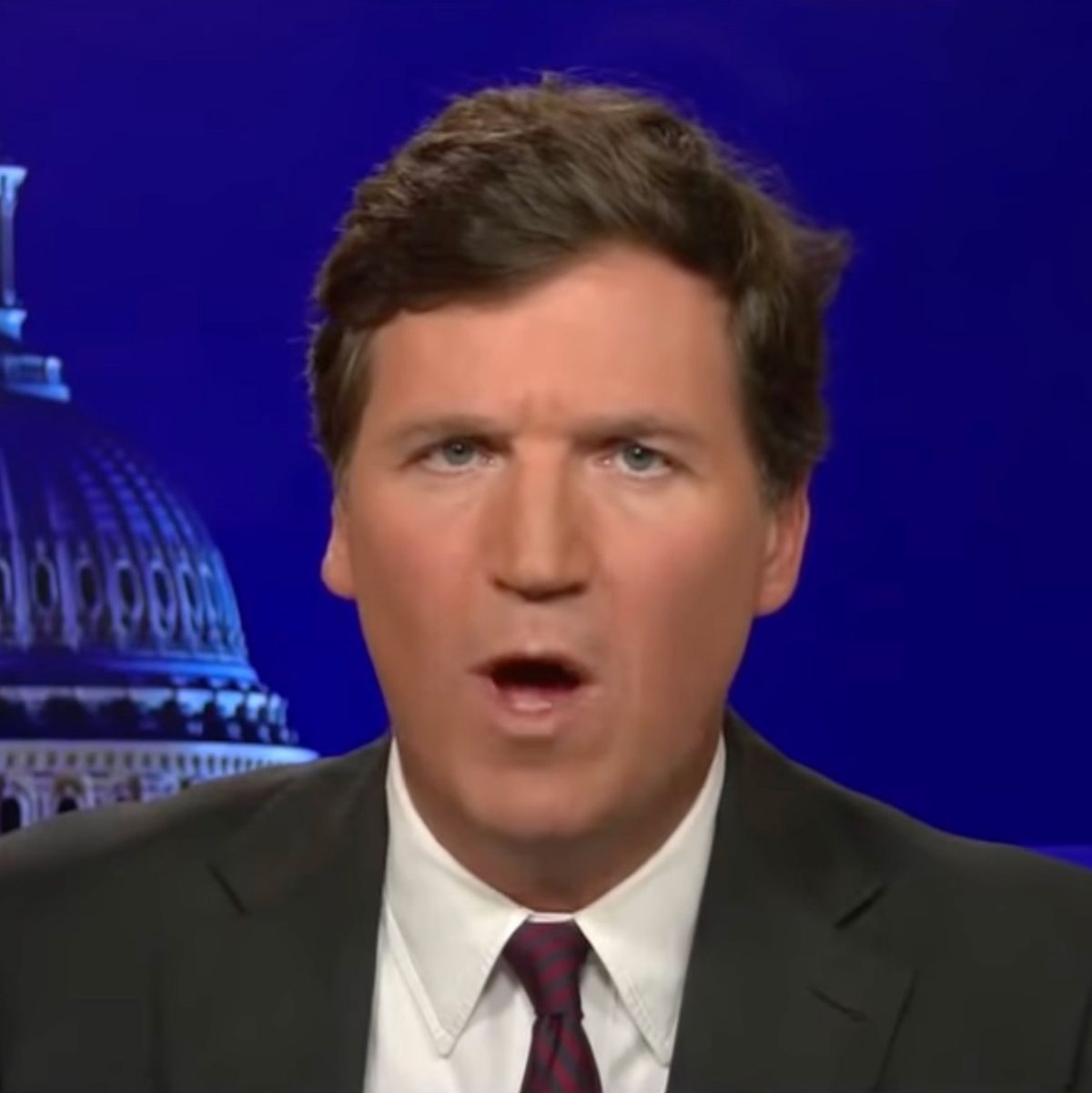 President Andrzej Duda gave an interview to Tucker Carlson, a guru of the American right. If he did it to spoil relations with Washington even further, it was the perfect way.

It is not known whether presidential intelligence officials realized how the current U.S. government might perceive Andrzej Duda’s performance while speaking to Tucker Carlson, Donald Trump’s chief spokesman, a man who is especially virulent in his attacks on Joe Biden’s administration and the Democrats. But the ace of Fox News — his program, broadcast at 8 p.m., is watched by approximately 3 million viewers and twice as many on the internet — deserves attention not only because it exerts control over these souls. More importantly, Carlson’s entire career shows how significantly American media and American politics have evolved.

“After Biden’s inauguration, Carlson is Trump in Trump’s absence,”** said Todd Belt, a political scientist at The George Washington University. Unlike anyone other than the former president, Carlson fuels American phobias, especially on two issues: immigration and the ongoing pandemic. Trumpism flourishes in the fight against political correctness, but Carlson, as a journalist for conservative media, breaks every record on this front.

In April, Carlson said that by relaxing border restrictions, Biden is trying to “replace the current electorate in the U.S. with new people, more obedient voters from the Third World.” Although Carlson was charged with racism, he recently reiterated the thought even more forcefully, saying that the president was changing the “racial mix of the country.” This echoes the “replacement theory” promoted by white supremacists, predicated on the notion that nonwhite people will replace America’s white population. Still, Fox Corp. CEO Lachlan Murdoch said Carlson’s statements had nothing to do with racism.

A Fan of Orban

It is difficult to defend. In a radio interview, Carlson said it was not worth invading Iraq because Iraqis are “semi-literate monkeys.” When protests erupted after the murder of George Floyd, Carlson called Kyle Rittenhouse, the white teenager who shot three demonstrators, a hero. In addition, during the trial of the police officer who murdered Floyd, Carlson repeated the defense attorneys’ argument that Floyd had died of a drug overdose.

As a result, a number of companies withdrew their advertising from Carlson’s show. Still, Fox News did not have to worry; their ratings skyrocketed because the viewers liked that their idol challenged the liberal media. Warnings that Carlson is playing with fire, fueling racial resentments, do not help. What counts is provocation and sticking your tongue out at the hated guardians of political correctness. Consequently, Carlson is worshipped by neo-Nazis like Richard Spencer and David Duke. If he ever wants to run for president, as his fans urge him to do, he will certainly get the neo-Nazi vote.

Carlson’s vision of the world can be defined as pure Trumpism. Like the former president, the Fox News star believes the U.S. should end all “unnecessary wars” as soon as possible – that is what he reportedly advised Trump to do — and praises right-wing populist leaders around the world. In August, Carlson visited Hungary, where he met with Prime Minister Viktor Orban. Carlson conducted a lengthy interview and listened approvingly to Orban’s tirades against the global and cosmopolitan elite who don’t care about the interests of nations.

Commenting on the fight against the pandemic, Carlson portrays himself as a protector of freedom against the tyranny that is Biden, the president who urges people to get vaccinated and wear masks on public transport. Carlson does not say he is opposed to vaccines, he himself is vaccinated, but nevertheless, he has joined the anti-lockdown protests. In his opinion, if the unvaccinated are blamed for threatening the vaccinated — who, after all, are safe — then what should we say about the thousands of illegal immigrants from Haiti, 20% of whom are infected with COVID-19?

After last year’s presidential election, Carlson initially toned down reports about Trump’s assertion that the election was fraudulent.. But Carlson later defended the mob that stormed the Capitol on Jan. 6, hoping to overturn Biden’s election. While the insurrection took place under Confederate flags, Carlson argued there was “no evidence” of white racist involvement. Then, during the summer, he stated that the attack on Congress was, in fact, secretly the work of “FBI operatives” to discredit the right and crush the opposition.

Carlson, 54, did not show promise as a TV propagandist in his youth. The son of a conservative journalist and director of Voice of America under Ronald Reagan, ih tended to ignore the principles of journalistic impartiality during his apprenticeship but generally followed the rules. He started out by writing, and gained recognition among the editors of prestigious magazines for his brilliant style and argument. Writing about the presidential campaign in 2000, despite his conservative beliefs, Carlson did not hesitate to criticize Republican candidate George W. Bush.

Those were the olden days when publicists from the right and left still argued on the same television stations. Then, from 2000 to 2005, Carlson appeared on CNN’s “Crossfire” program, where two conservative journalists clashed with two liberals. He was sometimes carried away by his temper, so much so that the popular liberal satirist Jon Stewart, invited Carlson to the studio and called him a “dick” on air. CNN canceled “Crossfire,” and the era of dialogue ended.

In 2009, at the Conservative Political Action Conference, Carlson gave a speech in which he urged journalists to focus on reporting events rather than immediately judging them. “We are not as reliable as the liberals,”** Carlson said, pointing to The New York Times as a model of professionalism. The audience booed and called him a traitor. “It was a decisive moment. Tucker has changed; he has become part of the right-wing indignation machine,”** said Lincoln Mitchell, formerly of Columbia University, who knows the Fox News star from his youth in San Francisco.

Later that year, Carlson joined Fox News as a commentator. Seven years later, when the host of the most popular show, Bill O’Reilly, was fired for sexual harassment of female assistants, Carlson took his place. Carlson also changed his views. The former libertarian began praising Trump’s populist ideas — namely, Trump’s protectionism and plans to build a wall on the Mexican border. In the beginning, Carlson competed with the 9 p.m. Fox NEWS host, Sean Hannity — Trump’s mouthpiece and adviser — and quickly emerged victorious from the clash. He is just much more interesting and intelligent, he is just more sophisticated.

Carlson is the epitome of a new style. O’Reilly commented on reality with a kind of simplicity, trying to project common sense and honesty. He defined himself as a moderate conservative but not a Republican, stressing his independence. Hannity does not hide his right-wing dogmatism as he lies cynically in the service of the party, but he is easily caught doing so.

O’Reilly and Hannity are examples of fairly primitive right-wing propaganda, unlike Carlson, a master of demagogy masquerading as meaningful argument. He has a unique talent for taking half-truths and presenting them as truth, and finding the awkwardness and quirks in the statements of ruling politicians, as he exaggerates what’s said and presents them as national disasters.

Biden once said he was pleased with how American demographics had evolved in such a way that white people would eventually be in the minority. But, of course, he probably was referring to the great potential of immigrant integration. For Carlson, though, demographic change confirmed the conspiracy theory about “replacing” white Americans with immigrants of color, who tend to be liberal supporters. Further, when Democratic Gov. Kathy Hochul declared that those who do not vaccinate “oppose God,”** Carlson sounded the alarm that Democrats are replacing Christianity with the “cult of the coronavirus.” In other words, those who allegedly support science and reason, are, in fact, the spokespeople of obscurism.

While O’Reilly gave the impression that he believed what he was saying, this doesn’t seem very important to Carlson, who says what his fans want to hear or what they need to be told. Hannity’s lies were shocking because he uttered them 20 years ago, when people made an effort to shape words to reality. Carlson’s lies are no longer provocative because his entire narrative builds a new reality that challenges whatever the mainstream media report. “If you’re looking to understand what’s actually happening in this country, always assume the opposite of whatever they’re telling you on the big news stations,” he said three years ago.

Carlson’s task is much easier now because the other side has also become radicalized, and the excesses of the progressive Democrats — namely, critical race theory, revisionism, deepening division and calls for open borders, have become a convenient target for him.

When you watch TV stations that are favorable to Biden, you get the impression that the U.S. is an entirely different country from the one shown you see on Fox News. While Murdoch’s station repeatedly exploits the immigration crisis at the border and exploits rampant crime, CNN and MSNBC torment viewers with pandemic coverage, masks, vaccines and news of the endless dispute in Congress over economic packages, these stations barely touching on the president’s troubles. Both camps have refused to speak to each other for a while now, as they choose to engage in monologues within their own hermetic bubbles.

*Editor’s Note: The original language text of this article is available via a paid subscription.

**Editor’s Note: This quote, accurately translated, could not be verified.

About Daniela Wojas 23 Articles
I am originally from Poland but currently residing in the United States. I received a bachelor’s degree in Classics and Ancient Mediterranean Studies from the University of Illinois at Chicago. I am passionate about languages, literature, and archaeology and would love to pursue a career in translation, especially in the literary field.