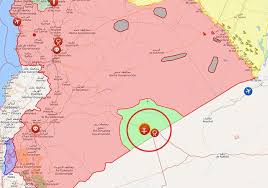 A small base on Syrian soil had remained outside the game until now, but a series of military strikes attributed to Israel in recent months apparently has led to an unusual, overnight Iranian revenge attack — an American target as a message to Jerusalem. This morning: Iran has started a large air exercise.

The overnight attack on the al-Tanf American military base in the tri-border region of Syria, Jordan and Iraq (on Syrian soil) signals a hardening in the Iranian Quds Force operations policy in Syria, and may also be intended to pressure Washington in the context of talks for returning to the nuclear agreement. Today (Oct. 21), Iranian television reported the start of a large air exercise. According to the report, bombers, fighter and attack aircraft and unmanned aerial vehicles from all Iranian airbases are participating in the maneuver following another air defense force exercise.

The operation against the Western coalition military base in Syria, which was originally intended to combat Islamic State, has shown that the war on Syrian soil between various parties has recently changed — including, according to Arab media reports, operational patterns in the Israeli battle between wars in Syria.

The Americans, as said, set up al-Tanf military base on Syrian soil within the framework of the war against the Islamic State group. This is a base housing some 400 American military and civilian personnel, and several dozen British and French military intelligence elements who are engaged in gathering information in the Islamic Caliphate’s home front, established by the Islamic State group in Syria and, primarily, in Iraq.

Russia and the regime in Damascus oppose an American presence at the base on Syrian soil, a presence that impacts their means to restore full control of Syria to Bashar Assad. Those injured in the unusual attack were Americans; it can be assumed that an American response to the base attack will come.

The military base received protection from Syrian Kurdish forces that oppose the Assad regime and belong to the larger organization called the Democratic Forces in Syria, composed of Kurds, regional Syrians and Syrian Arab tribesmen, all of which oppose the regime.

The military base at al-Tanf was a forward outpost of the Western coalition operating from Jordan against the Islamic State group in collaboration with the Kurds and Arabs from the eastern Syrian desert. After the Islamic State group was defeated and the caliphate ceased to exist, the base at al-Tanf continued to operate primarily in collecting intelligence and conducting special forces operations against the Shiite militias that the Iranians brought to Syria.

These same militias began entrenching in the area of Albu Kamal and al-Qaim, almost 300 kilometers northeast of al-Tanf, in an area where the Euphrates River crosses the Syria-Iraq border and where the primary Iraqi border crossing points are found. This area serves as the land corridor set up by Iran, running from Tehran through Iraq and from the eastern Syrian desert to Lebanon.

Quds Force Commander Qassem Soleimani was responsible for setting up the military bases for these militias in the border region between Syria and Iraq and, subsequently, the communities along the Euphrates River in the area close to the Iraq-Syria border. Israel and the Americans, as published in the international media, have on a number of occasions bombed these Iraqi, Afghan, Pakistani and Syrian Shiite concentrations, which have operated with the financing and under the authority and direction of the Iranian Quds Force.

After the assassination of Soleimani in January 2020, his successor, Ismail Ka’ani, redoubled the work of establishing Shiite militia bases loyal to Iran on Syrian soil. These militias have also operated from time to time by using UAVs and rockets or explosive charges against both American forces in Iraq and against Israel. In response, they were bombed by the Americans and, according to foreign reports, by Israel.

However, the small military base at al-Tanf has remained outside the game, since the American forces at the base engaged primarily in intelligence collection and warfare against the remaining Islamic State group elements in the region. In addition, the American forces were located far from these militias, which feared engaging with the Kurdish-Syrian forces and perhaps also other elements trying to attack them.

This was the first time that the base was attacked. The reason for this, apparently, was due to several attacks in the past two months against the Shiite militia base in the Deir al-Zour region and the Albu Kamal border crossing between Iraq and Syria. These attacks, according to Syrian media claims, were launched by Israel from the small al-Tanf military base’s airspace.

These attacks, according to official and opposition Syrian media reports, caused deaths and injuries among militia members and the Syrian military. Afterward, a new organization called “the Syrian allies war room” appeared, vowing to avenge the victims and the destruction caused by the attacks from the al-Tanf area, although no party took responsibility.

In one of the incidents, on Sept. 15, Syrian opposition elements claimed that the Americans attacked the pro-Iran militia military bases with missiles, but the Americans denied this and even pointed the finger of blame at Israel. In all, four attacks against some six targets on Syrian soil were conducted recently from al-Tanf, including Iranian military facilities at the T-4 airfield and militia bases at Deir al-Zour. According to elements in the Syrian media, Syrian anti-aircraft batteries were attacked, apparently killing Syrian army elements.

The attacks, as said, were ascribed to Israel. If the Israeli air force or special forces conducted the attacks against the anti-aircraft batteries and the pro-Iran militia bases in Syrian territory from al-Tanf, then it can be assessed that the attacker carried out the operation with political considerations. First, in the eastern Syrian desert, there are few Syrian air defense batteries; the few that are available are outdated Russian models. The old equipment cannot seriously threaten modern military aircraft attacking the area.

In can also be concluded that the few anti-aircraft batteries near the city of Palmyra, for example, were silenced when unknown aircraft attacked the Iranian militia bases in the area. In the past, airstrikes ascribed to Israel usually were conducted from Lebanon, from the direction of the Mediterranean Sea or from Israeli territory. The aircraft, and the air-to-ground missiles fired by the aircraft, were required to overcome modern and very heavy air defense systems, all of Russian manufacture and located in central and western Syria, primarily around Damascus.

This military array succeeded in intercepting many of the munitions launched from the aircraft (costing hundreds of thousands of dollars) and, in one case, also downed an Israeli F-16 over Israeli territory in 2018. As mentioned, in the eastern Syrian desert, the Syrian anti-aircraft array is particularly thin; therefore, the air force that attacked at least four times in the past two months did not have difficulty in neutralizing the air defense and attacking the pro-Iran militia targets with great precision.

However, there is also a possible political reason: The attacks ascribed to Israel by Arab and international media in Syria greatly embarrassed Russians, given that the air defense systems it supplied to Syria did not succeed in stopping the attacks or the damage they caused.

Russian generals stationed in Syria claimed on more than one occasion that the Russian-manufactured air defense systems had blocked Israeli airstrikes by intercepting missiles launched by Israeli aircraft. These claims were inaccurate, to say the least. The airstrikes achieved their goal, slowing down Iranian military entrenchment in Syria and the improvement of Hezbollah’s and Syria’s missile systems.

However, one can understand why the Russians had an interest in denying this fact. The Russian consideration was commercial, primarily, since the anti-aircraft batteries were one of Russia’s biggest military exports and the airstrikes ascribed to Israel succeeded in penetrating the world’s thickest defense array of Russian-made anti-aircraft and anti-missile batteries. This caused damage to the reputation of Russian military industry and threatened to reduce sales.

Therefore, even during previous times when unknown aircraft attacked from al-Tanf, a Russian general in Syria claimed the few anti-aircraft batteries in the region did not open fire because they feared striking two civilian aircraft flying in the area in the middle of October. But this claim is not exactly correct; the air defense array in the al-Tanf area is so thin that the air penetrations do not agitate the Russians.

It can be assessed that the party attacking from al-Tanf requested to conduct the mission, including against the T-4 airfield, without embarrassing the Russians and without taking risks that some of the air-to-ground missiles fired from the aircraft would be intercepted as in the past. There was military, economic and political consideration taken by the party attacking from al-Tanf.

The Iranians apparently understood the situation, but in contrast to the past, decided to attack al-Tanf military base using UAVs as they did two years ago in Saudi Arabia. Losses among the Americans and damage to the base is unknown at the present time.

Perhaps the attack signals a hardening of the Iranian line and readiness to contend with the Americans even on Syrian soil, something it has not done in the past. Only Iraqi militias operating under Iranian dispatch have dared to do this on Iraqi soil. The question is what the American response to the Iranian escalation will be. Of note, the attack against al-Tanf was conducted in response to airstrikes attributed to Israel, not to the Americans themselves.

About Charles Railey 39 Articles
I recently retired from the federal government, having worked for many years on Middle East issues and regional media. My fascination with the region has never changed and this is one reason why the work of Watching America caught my eye. I live in the DC area with my wife, two grown children, and three cats.