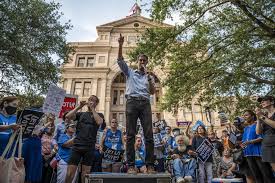 Beto O’Rourke has chosen to challenge the incumbent Republican governor in conservative Texas, of all places. His chances of succeeding are, in fact, quite good.

Suppose that one could combine the anarchic energy of a punk rocker with the discipline and stamina of a rower, a keen sense of social justice, a charisma that fills rooms, oratory skills on par with a Kennedy and the perfect mix of experience and freshness that comes with being 49 years old — would that mixture not make for a more or less ideal American politician? “Yes, of course,” would have to be the answer, with the caveat that no such person exists in this country. But in actual fact, such a person does exist. That person is Beto O’Rourke, who has just announced that he intends to run against the Republican incumbent, Greg Abbott, in the Texas gubernatorial election.

The Texan Ran for President in 2019

O’Rourke was one of the 2020 Democratic presidential candidates, from conservative Texas, a state in which the Democrats do not traditionally gain any ground. Nevertheless, in 2018 he demonstrated what might be possible when he ran for a seat in the Senate, only narrowly losing out to Republican Ted Cruz, who had been considered unbeatable. Former President Barack Obama was so impressed by O’Rourke’s election campaign that he invited him for a conversation — possibly because he saw in the Texan a potential successor.

Even though he lost, ever since this election campaign O’Rourke has been known throughout the country. In 2019, he attempted to capitalize on this attention by running for president. After a few months, he dropped out of the race and endorsed the eventual winner, Joe Biden.

Since then, little has been heard from O’Rourke at the national level, as he was busy planning his political future. He was getting a feel for the atmosphere in the party. He was sounding out the situation. Now he has decided to take a brave step.

If O’Rourke had simply wished to return to the political stage, it would have been easy for him to again run for a seat in the U.S. House of Representatives, in one of the urban and therefore more Democratic congressional districts in Texas. He was a U.S. representative from 2013 to 2019, but did not run for reelection because he ran against Cruz. He wanted to achieve the impossible — namely, to defeat a Republican incumbent in Texas. Now he is attempting this again.

More and More Liberals Are Moving to the State

Most of the clichés about Texas are true: the pickup trucks, the love of weapons, the whole nine yards. Yet at the same time, the population in cities such as Austin, Houston and Dallas is increasing. Those moving there are primarily people of Hispanic origin and liberals from the West Coast.

The changing population explains why the Democrats have for years been hoping to turn the tide in Texas. So far, they have not been successful. Should O’Rourke manage to win the gubernatorial election in November 2022, that would be a signal.

The fact that the election campaign will last a year could work in O’Rourke’s favor. When he first ran for a seat in the House of Representatives in 2012, he knocked on 16,000 doors. In that respect, he is relentless — rowing has instilled that in him.

Up until his mid-20s, he played bass guitar in various punk bands. It was during this time that he was arrested for driving while intoxicated, an incident that is expected to play a role in the current election campaign. He has found rowing to be a way of finding balance and channeling his energy. These days, O’Rourke presents himself as a family man, as the husband of Amy Hoover Sanders and the father of three children.

Should he lose again, no matter how narrowly, his political career will almost certainly be over. Should he win, there is a good chance that Obama may wish to continue the 2018 conversation about O’Rourke’s political future on the national stage.

About Kirsty Low 24 Articles
I am a German to English translator from Scotland with a passion for all things related to language and translation. I recently completed my MSc in Translation, which only further cemented my enthusiasm for the profession. I have experience translating texts from diverse fields and enjoy taking on new challenges.