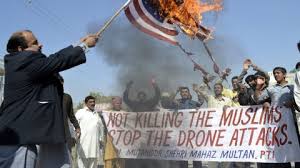 ”What I saw after studying them was not a series of tragic errors but a pattern of impunity: of a failure to detect civilians, to investigate on the ground, to identify causes and lessons learned, to discipline anyone or find wrongdoing.” This is investigative journalist Azmat Khan’s analysis of the actions by the U.S. military in the Middle East theater. Her lengthy investigative report, recently published in The New York Times, reveals the inside story about the large number of civilians killed by the U.S. military in war and points out that the U.S. has ruthlessly constructed “a system that seemed to function almost by design to not only mask the true toll of American airstrikes but also legitimize their expanded use.”

The lengthy article is divided into two parts, the first entitled “Hidden Pentagon Records Reveal Pattern of Failure in Deadly Airstrikes,” the second called “The Human Toll of America’s Air Wars.” Statistics show that from Iraq to Afghanistan, from Syria to Yemen, more than 90,000 U.S. airstrikes have caused at least 48,000 civilian deaths in the past 20 years. The U.S. military turned its guns on “farmers in the middle of harvest, children playing in the streets, families fleeing the fighting and villagers taking shelter in buildings.”* These heinous crimes completely undermine the U.S. lie that airstrikes do not cause massive civilian casualties.

Comments on social media have condemned the atrocities by the U.S. military, saying, ”Enough is enough! Why do we always kill innocent people in the name of making others’ lives better?” “This is no different from terrorism, which is why they hate us (the U.S.).”*

However, so far there has been no response from the White House. U.S. Central Command spokesman Bill Urban downplayed the report saying, “even with the best technology in the world, mistakes do happen … And we try to learn from those mistakes.”

How many souls have died under U.S. fire! How many families have been torn apart by this! How many tragedies have been played out over and over in the Middle East! The U.S. military actually tries to pass it off as a “mistake.” Are these the “human rights” the U.S. government claims to defend?

What is even more outrageous is that it has become normal for the U.S. military not to apologize, provide compensation or hold anyone accountable after committing crimes. Just a few days ago, the Department of Defense made it clear that no U.S. military personnel will be punished for the August drone attack on Kabul, Afghanistan. The international community harshly condemned the attack that killed 10 civilians, including seven children. In sharp contrast, earlier this year, a former U.S. intelligence officer who witnessed the indiscriminate killing of Afghan civilians by U.S. drones was sentenced to 45 months in prison for leaking information about it to journalists. Killers are not guilty while the person who exposes the truth is punished. Is this what the U.S. claims to be “fairness and justice?”

Ironically, U.S. politicians have actually endorsed drone strikes as being “more accurate than ever” in helping to keep civilian casualties to a minimum. The Pentagon even boasts that drone technology can accurately strike a part of a building, eliminate the enemy hiding in it and leave the rest of the structure intact. In fact, however, according to a Public Broadcasting Service report on Nov. 9, 2018, the U.S. military’s “most accurate airstrike in history” on the Syrian city of Raqqa alone resulted in the death of 1,600 civilians.

Khan also reported that according to U.S. military logic, an airstrike is acceptable as long as it has been decided and approved by the chain of command, regardless of the number of civilian casualties. This shows that sacrificing civilians for military gain is a top-down, tacitly approved way of operating for the United States.

Washington politicians know better than anyone how many dirty crimes the U.S. military has committed! That is why, when the International Criminal Court announced in September 2020 that it investigate this situation, the president publicly pushed back and imposed sanctions on two senior officials of the ICC.

As pointed out in a Dec. 23 report by the China Society for Human Rights Studies entitled the “Limitations and Drawbacks of American Democracy,” “past experience fully illustrates that the U.S. export of democracy to some regions caused new humanitarian disasters instead of bringing prosperity and development to the local areas.” The U.S. owes an incalculable blood debt in the Middle East and is the least qualified to speak of human rights! It downplays its actions and fails to take its own crimes seriously, yet it sanctimoniously tells other countries what to do in the name of human rights. This demonstrates the hypocrisy of the double standards that define “American human rights!”

It is time for the international community to investigate and hold the United States accountable for the war crimes it has committed! Those who perpetrate crimes and those who cover them up must be duly punished! Justice may be delayed but it will not be denied.