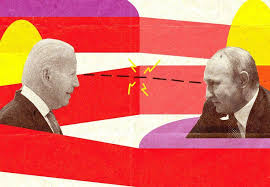 Who needs a war in Ukraine?

Russian and Western politicians are trying to stop the Ukrainian conflict from sliding toward a full-scale war. As a result, a situation has developed where everyone who is participating in the negotiations are trying to restrain one of the parties — the most aggressive, the most bellicose. And that party, strange as it may seem, is not Russia.

For several months now, the Western media have been anticipating a war in Ukraine. And, judging by the reporting, Russia will start the war by invading Ukraine. However, Russia has a different view. Moscow is pointing to the possibility of military provocation from the West or Ukraine, including an attempt by Ukraine’s army to occupy the territories of the Donetsk People’s Republic and Luhansk People’s Republic.

Whom should ordinary people believe? Nobody. Instead of taking the words of any side as gospel, we should simply analyze the motives of the main players in the Ukrainian conundrum: Russia, the U.S., the EU, Donetsk and Luhansk People’s Republics and Ukraine. We should analyze and understand which side needs this war.

It would seem that Russia needs the war. War would help Vladimir Putin kill two birds with one stone. First, it would expand Russian territory, at least at the expense of two new regions (Donetsk and Lugansk), and at the most, at the expense of other Ukrainian territory. There will be no South Ossetian scenario of de facto independence; there are Russians citizens living in Donetsk and Luhansk. Hence, after Russia’s inevitable recognition (should there be a war), they will become part of the country. Second, Putin will demonstrate his geopolitical power to the West. War would show that his warning about how unacceptable it is for the U.S. and the EU to interfere in the affairs of the former Soviet Union should be taken seriously. It would also demonstrate that if there is no progress in the U.S. talks, Moscow will solve its security problems by other less diplomatic means. And the reason for killing two birds with one stone is more than justified: protecting the lives of half a million Russian citizens in Ukraine.

However, if we look deeper, Moscow is not interested in war. Russia cannot get what it already has. Donetsk and Luhansk People’s Republics are already incorporated into Russia in every sense except officially. They are not going cease this process to return to Ukraine. As for demonstrating Russia’s interests, war isn’t necessary at the moment because negotiations are progressing. There will be a series of talks between Russia and the U.S. and NATO from Jan. 10-12. And even if the parties fail to reach a compromise, there will hardly be an escalation on the part of the U.S. (something which would demand a Russian military response).

As for America’s interests, it would seem that the U.S. needs the war just as much as Russia. Suppose it pressures the Ukrainian government into conducting a blitzkrieg in Donbass, prompting the entry of Russian troops into Ukraine. In that case, the U.S. would get the justification it needs for imposing the harshest sanctions possible against Moscow, including an embargo of technology companies. In addition, war could disrupt Russian-Western negotiations and drag Russia — in this case, a country that has invaded Ukraine — into a mess for years to come.

However, as with Russia’s motives, the U.S. interest in the war in Donbass is seriously exaggerated. It would have no advantages. America can impose sanctions on Russia without war. The U.S. needs the Russian-Western talks to ensure deescalation and free up resources for the much more important task of containing China. More precisely, the Biden administration needs those talks, since many politicians in the U.S. believe that America can simultaneously clash with Moscow and Beijing. These politicians live in a completely different reality and currently have no considerable influence on decision-making in the U.S.

With the EU, it is all very simple Europe has the most to lose in the event of war. First, the EU would be flooded with Ukrainian refugees — those Ukrainians taught to hate Russia. Second, the European states would have to sever their remaining ties with Russia at a financial loss. Third, U.S. troops (including additional nuclear weapons) would be deployed in the European states, following which the EU would be caught in the crossfire. Fourth, the EU would lose Russia as a reliable gas supplier. Finally, a war would underscore the EU’s lack of power and political impotence. The EU is already being dismissed by the U.S. and Russia, and has been barred from negotiating security guarantees. Hence, the EU tells fairy tales about how Putin intends to send Russian tanks to Kyiv, but at the same time prays that there will be no Ukrainian provocation that will lead to war, big or small.

Then maybe the People’s Republics in Donbass need a war? After all, the result of such a war would signal the long-awaited incorporation into Russia. In addition, combat operations could somewhat expand their borders and help them regain control over territories they lost in 2014. Finally, other regions of Ukraine might revolt.

Still, all these aspirations are illusory. As mentioned above, the Donetsk and Luhansk People’s Republics are integrated into Russia in every sense, except territorially. It will be challenging to cause a revolt in other regions that have been living with extreme anti-Russian propaganda for many years. And war means heavy casualties for the already small republics.

Finally, Ukraine. Any sane person would say that Ukraine certainly does not need a war, and that Ukrainian leadership is not sadomasochistic and would not “invite” Russians to a war; that Kyiv is always in favor of world peace. However, if you weigh the motives, what does Ukraine lose in the case of a small-scale war, given that Putin will not send tanks to Kyiv in any case? Donbass, which hardly belongs to Ukraine? Money, which will be replenished by Western aid? What does it lose?

In essence, nothing. But Ukraine will gain a lot: A new package of sanctions against Russia and notorious disruption of the Russian-Western negotiation process. After all, if Joe Biden and Putin were to agree, it would be at the expense of the interests of the current Ukrainian regime. Finally, Ukrainians will rally around the courageous President Volodymyr Zelenskiy, whose tumbling approval rating urgently needs a heroic deed to stop Russian aggression (whenever the Russian troops want to stop).

Ukraine apparently and sincerely believe it can get gain political dividends from a lost war. Thus, Ukraine is the only serious beneficiary of a war. Kyiv would have started it long ago if the U.S. did not directly prohibit it. For now, America can still give orders to its allies. For now.

The author is expressing his personal views, which may not reflect the position of the editorial board.

About Nikita Gubankov 44 Articles
Originally from St. Petersburg, Russia, I am currently a student at University College London, UK, studying for an MSc in Translation Technology. My interests include history, current affairs and languages. I am a keen translator from Russian into English and vice-versa, and I also translate from Spanish into English.