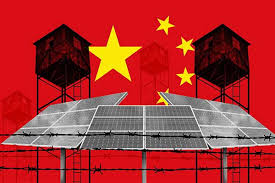 Recently, under the guise of human rights, the U.S. has once again resorted to political maneuvering and economic bullying, insisting on signing into law the Uyghur Forced Labor Prevention Act. The law is an attempt to damage Xinjiang’s prosperity, stability and ethnic unity and stifle China’s development under the pretext of concerns about “forced labor.” For one thing, the alleged existence of forced labor and of genocide in Xinjiang is a malicious lie cooked up by anti-Chinese forces in the United States and the West. Xinjiang’s economic development and social stability are internationally recognized; everyone can see that people of all ethnic groups live and work there in peace and harmony.

Another issue is that America’s approach is completely at odds with market rules and business ethics. It will not only have a huge impact on the global industrial supply chain and disrupt the international trade order, but also severely damage global action to reduce greenhouse gas emissions. It is declaring war on the global joint response to climate change and is bound to be rejected by most members of the international community.

One of America’s biggest motives for creating the Uyghur Forced Labor Prevention Act is to curb the development of the photovoltaic industry in Xinjiang and interfere with China’s participation in value chain cooperation within the global PV industry.* The law pays special attention to polysilicon, the most important basic raw material in the PV industry. In 2020, China’s polysilicon production reached 396,000 tons, 76% of the world’s total. In terms of geography, China’s polysilicon production is mainly concentrated in Xinjiang, Sichuan and Inner Mongolia. Xinjiang’s production in 2020 reached 202,100 tons, accounting for 51% of the nation’s output with a total value of about 15.05 billion yuan ($2.37 billion). Able to rely on abundant, guaranteed raw materials and with the advantage of low electricity costs, Xinjiang has rapidly developed into a hotspot for polysilicon investment in the country.

Xinjiang has four polysilicon enterprises ranked among the world’s top 10 for production capacity and is gradually becoming the region where the global industry is most concentrated. It is against this backdrop that industrial clusters have been formed in Xinjiang that are built on silicon. They have promoted the rapid development of both the upstream and downstream production chains of the PV industry,** created a large number of jobs and made a huge contribution to the livelihoods, income and happiness of people from all ethnic backgrounds in Xinjiang.

At present, more than 70% of the world’s photovoltaic products are manufactured in China. China’s PV industry is achieving its goal of serving the world and lowering the global cost of clean energy. A growing number of countries and regions are taking active steps to tackle global climate change and to work together to promote a “green recovery” for the world economy in the wake of the COVID-19 pandemic. Driven by technological advances to improve system efficiency and other factors, the cost of photovoltaic power generation will drop rapidly and its cost advantages will become increasingly obvious in the future. Dealing with climate change with the help of renewable energy, as represented by photovoltaics, has become the global consensus in sustainable development.

Climate change is a challenge common to everyone. Addressing climate change is key to the future of humanity. Against a backdrop of nations around the world committing to targets for energy saving and emission reduction, society needs cooperation rather than division and healthy competition rather than malicious smears. Xinjiang’s polysilicon and PV industries play a critical role in the world’s industrial and supply chains. They are strong competitors to related industries in the United States; the U.S. naturally wants to eliminate them. It has been proven that the Chinese and U.S. economies are very complementary and that the interests of the two countries are highly intertwined and locked together.

The United States has repeatedly used the issue of Xinjiang to spread rumors and create trouble, waving the banner of human rights in an effort to undermine Xinjiang’s prosperity and stability and curb China’s peaceful development. But this has frequently backfired, as the Uyghur Forced Labor Prevention Act and U.S. attacks on certain Chinese economic interests have actually created bigger problems and more trouble for domestic companies. This time, the U.S. has used “forced labor” as an excuse to maliciously push enactment of the Uyghur Force Labor Prevention Act. This attempt to undermine the prosperity and stability of Xinjiang, grossly interfere in China’s internal affairs and suppress China’s economy has angered Chinese society and the industries concerned.

Xinjiang’s affairs are purely China’s concern, and no foreign government or power has the right to interfere. Using “forced labor” as a pretext to suppress Xinjiang’s enterprises and China’s related industries fully exposes America’s sinister intentions to “use Xinjiang to control China” and contain China’s development. Using the issue of Xinjiang to engage in conspiracies and trickery will not stop the people of all ethnic groups in Xinjiang from taking determined steps to pursue a better life, nor will it prevent China from continuing to contribute to the global response to climate change.

The authors are lecturers in the School of Public Administration, Southwest Jiaotong University, Chengdu, China.

*Translator’s Note: Value chain refers to all the steps involved in bringing a product from conception to distribution, from procuring raw materials to manufacturing functions and marketing.