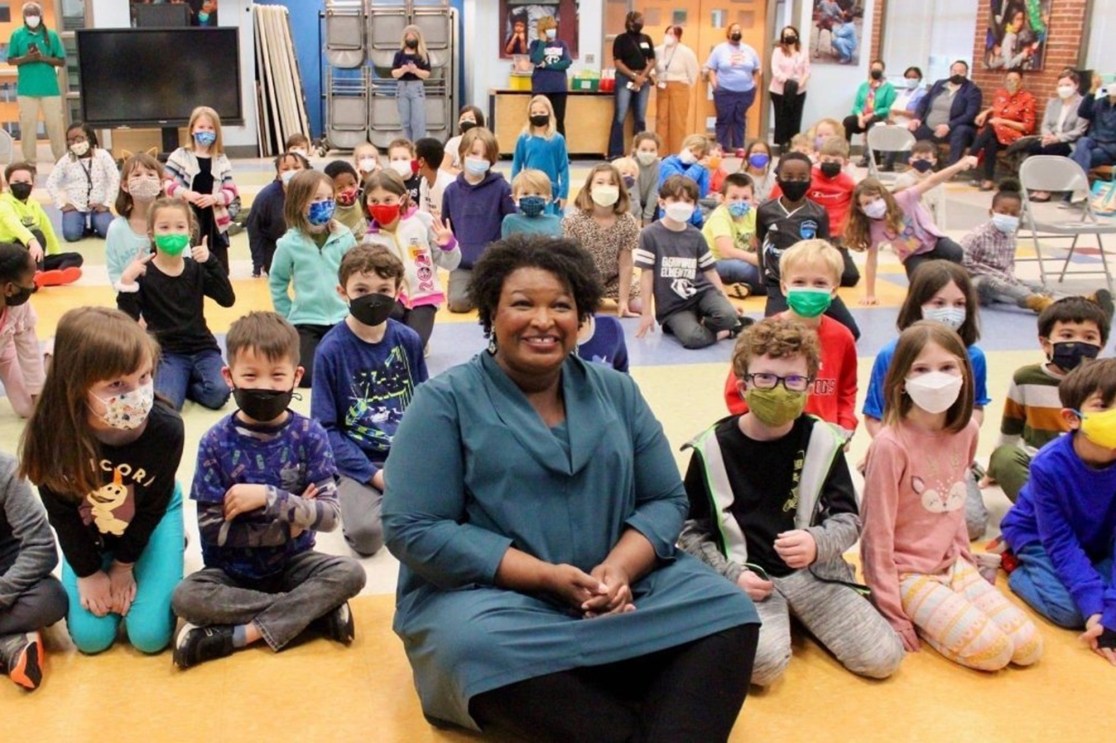 The obligation to wear a mask is becoming increasingly rare in the United States, especially since one of the leading figures among Democrats has been photographed in a classroom — without a face mask.

If one picture is worth 1,000 words, some speak more than others. The photo of Stacey Abrams, a Democratic star, taken in a school and broadcast on social network the week of Feb. 4, doesn’t just speak — it shouts.

That is because Abrams, currently running for governor of Georgia and previously on Joe Biden’s short list of running mates for 2020, was surrounded by children … unmasked and smiling radiantly.

On the eve of the second anniversary of the health crisis, this image seems to have been the last straw for many opponents of governmental COVID-19-related restrictions. Mask mandates in schools and numerous public places in different states, especially those run by Democrats, remain the most important measure to fend off COVID-19 in the United States. Most Republican-majority states abandoned such requirements in 2020 and 2021.

The photo of Abrams has generated a political storm. Officially, Abrams is in favor of mask mandates in schools. The Democratic Party has maintained that Abrams wore a mask during her visit and that she only took it off for the photo and a speech. She nevertheless apologized for having removed it.

It was enough for Republican politicians and conservative media to accuse her violating school regulations. And the story set off a chain reaction throughout Democratic states.

At the beginning of last week, the Democratic governor of New Jersey, a state with one of the highest COVID-19 mortality rates during the pandemic, got the ball rolling by announcing that he was going to put an end to the requirement that children wear masks in school. In the hours that followed, the neighboring states of Connecticut and Delaware followed suit, lifting the requirement for adults in public places, but retaining it in schools.

The following day, it was California and Illinois. The day after that, New York and Massachusetts, and each state put forth its own versions of mask requirements. In New York, the mask mandate is being retained in schools, but is not required elsewhere. In California, by contrast, it is required of those who are not vaccinated, and as far as schools are concerned, the state leaves it to local school authorities to decide. In Illinois, masks are not required except in schools, while Massachusetts will lift the mask mandate altogether beginning Feb. 28.

Thus, six of the seven most important Democratic strongholds have announced a 180-degree turnaround of months-long policy in the space of around 48 hours.

If there seems to be something a bit orchestrated about the whole thing, that’s because it was.

As revealed in The New York Times on Feb. 8, the leaders of these states had been communicating among themselves for some time, sensing a growing popular discontent toward the remaining restrictions, even among Democratic voters, though they had been more receptive to health protection measures at the beginning of the crisis. All that was missing in order to take action was a spark: the photo of Abrams has perhaps proved sufficient.

Perhaps the fact that it is Paul Murphy, the governor of New Jersey, who got the ball rolling for lifting the school mask mandate should not come as a surprise. Last November, Murphy’s very thin victory in a state carried by Joe Biden by some 15 percentage points upset the Democrats. Seeking to understand what had happened, the Murphy team organized voter focus groups and discovered that the anger and weariness tied to COVID-19 restrictions had weighed heavily on their choice.

His colleagues from other states will have to face voters during the midterms in less than nine months. Therefore, no one will be surprised that many people up for election quickly made the same decision as Murphy.

Are these rapid-fire changes a sign that COVID-19 has been wiped off the map in the United States? Quite the contrary.

In all the states that have ended mask mandates in schools or in general, the number of reported infections and daily deaths tied to COVID-19 is higher now than it was when mandates were in effect. There were more deaths tied to the virus in the United States in January 2022 than in January 2021. And American scientists led by Dr. Anthony Fauci are not ready to recommend the end of mask mandates in all circumstances.

But the people seem to be elsewhere. On May 24, 2020, while the United States approached the symbolic milestone of 100,000 deaths, The New York Times devoted its entire front page to the subject with the headline, “US Deaths Near 100,000: An Incalculable Loss.”