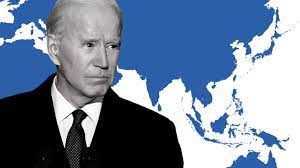 On Feb. 11, the White House released a report on Indo-Pacific strategy. Considering the five major sections, it’s apparent that this report is incomplete and can be regarded only as a rough draft of America’s intentions. Parts relevant to implementation are missing. It seems that we will have to wait until after President Joe Biden’s trip to East Asia in May to get a fuller picture of America’s entire Indo-Pacific strategy.

This strategic report can alternatively be regarded as Biden’s warm-up before his trip to the Asia-Pacific. Still, this trip is unlikely to entirely shape the Asia-Pacific security framework, because the Chinese Communist Party will hold its 20th National Party Congress this September — an event which will certainly require commensurate consideration. Only after these two strategic lines of thought and framework collide will the situation facing the Asia-Pacific (including Taiwan) in the next three years take shape.

Since Biden took office last January, he has had only a provisional China strategy that revolves around China’s activities in eastern China. However, from talks within the Quadrilateral Security Dialogue and the more recent trilateral pact, AUKUS, as well as the many large naval exercises occurring in between, his intentions are clear.

Undoubtedly, Biden will further clarify the achievable limits of his intended strategy during the trip this May. First, South Korea, which has an election in March. If Biden visits the country in May, it is an excellent opportunity for him. The U.S. hopes to bring South Korea back into its Northeast Asian security framework — one of the important tasks for this trip.

No matter what Biden will gain from this trip, the CCP’s 20th National Party Congress undoubtedly must confront Biden’s whole Asia- and Indo-Pacific strategy. The strategic support Beijing can rely on in the West can more or less be seen in the attendance at the Winter Olympics: Leaders from Russia and five Central Asian countries all attended. They probably comprise the CCP’s geostrategy in defending itself against the U.S.

If the CCP can continue to stabilize the ASEAN countries with an RCEP framework, America’s strategic intentions will be at a disadvantage. As for the Taiwan Strait, it will also be included in this “disadvantage.” Has Taiwan’s Democratic Progressive Party thought of that?

The Quadrilateral Security Dialogue among foreign ministers is currently underway in Melbourne, Australia. The members also reached a consensus to meet again in the middle of the year, and so preparatory work before the leaders meet again will successively unfold.

While tensions have been high between Russia and Ukraine, a travel-worn Antony Blinken went to Asia to engage in geopolitical diplomatic talks. Obviously, the strategic value of the Taiwan Strait and the South Pacific is more than that of Ukraine. The U.S. is more concerned about the island chain in the western Pacific being breached and losing Taiwan, not the chain of land in Eastern Europe. The U.S. worries more about China than Russia.

The Quad talks mid-year are obviously a way for the U.S. to brandish its might, aimed at China. As for Taiwan, it should reduce the amount of provocative rhetoric. Taiwan should not be a lackey, but should watch the fray from a distance.