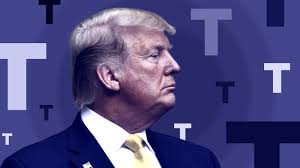 People forget so quickly. In the case of Donald Trump, a bad memory can sometimes be a blessing. But sometimes you have to remember. To remember, for example, why Trump was actually “permanently suspended” from Twitter. That happened at the start of 2021. A mob had just stormed the U.S. Capitol in a violent attack, in which five police officers lost their lives.

These events were preceded by many tweets from the president, who had been voted out, but was still in office. He spoke of election fraud and roused his supporters — after all, he had more than 87 million followers. That led to an act that, up until that point, was unprecedented. Twitter blocked a U.S. president because the “risk of further incitement of violence” was too large.

Trump responded much like a toddler would respond; he announced that he was creating his own platform. It is now being launched and is called “TRUTH Social.” That is fitting for someone who believes he has exclusive rights to the truth — notwithstanding the objective reality. The latter, of course, has long since become unimportant on social media, which is becoming ever more fragmented. On a downward spiral starting with Telegram, people stay in their own circles with their own opinions and alternative realities. Society’s divisions are present in the virtual worlds. Maybe everyone should simply launch their own platform. Then, once and for all, people will no longer have to listen to other people.

About Kirsty Low 21 Articles
I am a German to English translator from Scotland with a passion for all things related to language and translation. I recently completed my MSc in Translation, which only further cemented my enthusiasm for the profession. I have experience translating texts from diverse fields and enjoy taking on new challenges.