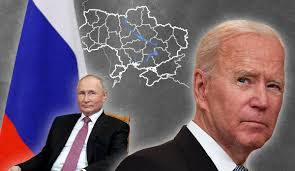 In his first State of the Union address, Biden condemned Russia’s invasion of Ukraine in harsh terms and announced that Putin will pay a high price.

The war provided a unique backdrop for this year’s State of the Union speech that the U.S. president delivers to the joint houses of Congress. In his remarks, Joe Biden reaffirmed America’s determination to help Ukraine and prevent Vladimir Putin from threatening NATO countries in Europe, although the message did not contain many details or announcements about new steps in this direction.

Biden: Freedom Will Triumph over Tyranny

Ukraine Ambassador Oksana Markarova, invited to attend the special event, was seated in the balcony next to first lady Dr. Jill Biden. Members of Congress from both parties wore blue and yellow ribbons, showing Ukraine’s colors. The president began by speaking about the historical significance of war, stating that the determination of America and the entire Western community would ensure “the triumph of freedom over tyranny,” and expressing his admiration for Volodymyr Zelenskyy as Biden quoted Zelenskyy’s message that “light will win over darkness.”

“[Putin] badly miscalculated … he met with a wall of strength he never anticipated or imagined,” Biden said. [

The president said the Russian invasion was “premeditated and totally unprovoked,” something that cannot go unpunished. He pointed to the sanctions introduced by the U.S. and the European Union, the freezing of assets belonging to oligarchs linked to the Kremlin and the boycotting of Russia, its organizations and its goods around the world. “Putin is now isolated from the world more than he has ever been,” Biden said, and noted that Democratic countries allied with the U.S. are “united and ready” to resist possible aggression. “[Putin] will never, never weaken the resolve of the free world,” he noted to a standing ovation from both parties in Congress.

The only new sanction on Russia announced in the address was the closing of U.S. airspace to Russian aircraft. Biden Immediately reiterated that U.S. troops recently deployed to Europe will not be sent into Ukraine, but have been dispatched to defend NATO territory. Biden also assured that he would do everything he could to lessen the impact of sanctions on Americans — especially the increase in gasoline prices — and announced that he would use strategic oil reserves to do so.

Biden devoted the first 20 minutes of his address to the confrontation with Russia before moving on to domestic affairs. He first underscored that during the first year of his administration, the U.S. created 6.5 million jobs, and the financial condition of Americans most affected by the COVID-19 pandemic has improved. He pointed to the fact that Congress passed the infrastructure repair bill and to his administration’s successful fight against COVID-19 through mass vaccination.

Despite these accomplishments, the atmosphere remained somber — almost 70% of the public thinks that the country is going in the wrong direction, and Biden’s poll numbers are as bad as Donald Trump’s were after a year in office. Fewer than 40% of Americans view his leadership positively. The causes for this dissatisfaction include inflation as demand increases during pandemic recovery, and rising crime. Many Americans share the view pushed by conservative media that gasoline prices are increasing due to the Biden administration’s reduction in oil production and the fact that increased crime rates are the fault of politicians from the Democratic left, who make police work difficult, especially in major cities.

Biden distanced himself from the Democratic left wing on this issue, asserting that the answer to rising crime is to fund the police, not defund them. It was the only part of the speech other than remarks about Ukraine that Republicans applauded. The remaining issues Biden addressed in his speech have met with the joint and demonstrative silence from Republicans, marked by at least two incidents. Republican Rep. Lauren Boebert attempted to interrupt Biden, screaming out as Biden remembered his son, Beau, who died of cancer. And chants of “Build a wall” broke out when Biden spoke about protecting the border from the impacts of immigration.

As noted by well-known CNN commentator Fareed Zakaria, if the Russians watched the speech, it was probably to assess how America, or at least its political elite, is uniting around the president in times of international crisis. Their assessment had to be mixed; party polarization is prominent. In response to the address, Republican Iowa Gov. Kim Reynolds claimed that it was Biden’s softness on the international stage that encouraged Russia’s aggression. She did not mention, however, that it was Biden’s predecessor in the White House who flirted with Putin and tried to blackmail Zelenskyy by threatening to withhold military aid if Zelenskyy he did not help defeat Biden by investigating Biden’s son, Hunter.

Therefore, you could understand Biden’s words at the beginning and end of the State of the Union speech, in which he expressed the conviction that democracy will win, although made in the context of a warning to Putin, as a reference to the difficult domestic situation in the United States. “Democracy will prevail,” Biden said. “As hard as these times have been, I am more optimistic about America today than I’ve been my whole life …We are stronger today than we were a year ago. And we’ll be stronger a year from now than we are today.”

Biden has always been optimistic, but polls indicate that the Democrats will lose their majority in both houses of Congress next year after the November midterm elections.

*Editor’s Note: The original article is available with a paid subscription.