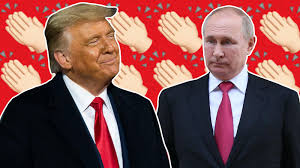 Can the West maintain its unity? What role will China play in the future? How will the world order change? It is impossible to predict, but the following four scenarios are very likely.

Imagine that Donald Trump was still the president of the United States. Presumably he would have described the invasion of Ukraine as a “smart move” that might serve as a model for solving the “Mexican problem.” “Putin is a genius” (Trump really did say that after the war started), he might have added. And that his friend Vladimir (Putin) is, after all, a good businessman. Someone you could do business with; there was no need to sanction him. The whole situation also just shows how dangerous NATO is for the U.S. As he probably would have argued, Europe could drag the U.S. into conflicts without paying for them.

In such a trans-Atlantic context, it is easy to imagine how Europe probably would have reacted. Surely the Federal Republic of Germany, President Emmanuel Macron and the European Union Commission president would all have “harshly condemned” the invasion. But otherwise? There probably would have been a great deal of conflict about the appropriate reaction. The Germans would have defended Nord Stream 2, the Swiss their banks and the Eastern European countries their sovereignty. Whether transnational civic society would have coalesced so quickly and decisively in this scenario also seems uncertain.

If all that had happened, one could in fact say that NATO, the United Nations and the EU as we know them, as well as the post-1989 global order in general, were brain dead. And there are many indications that that is precisely the reaction that the Russian president and his supporters expected. Otherwise, far fewer billions would have been frozen in the accounts of European banks. The sums that the oligarchs withdrew from their accounts before the war were, in fact, shockingly small. But things developed differently.

The West, or, more precisely, the global phalanx of liberal democracies, closed ranks as it had not done in 20 years. The defense of democracy and of the Ukrainian people’s right to self-determination seemed to take precedence over national interests. Global values such as peace and the integrity of national borders are being upheld. And some international organizations that had been considered brain dead suddenly seem very alive, especially NATO, but also the EU and even the United Nations. In addition, we are seeing an overwhelming reaction from civil society. Even sporting clubs and certain corporations with a strong presence in Russia are joining in.

So, the liberal international order, as we like to call it, is still alive. The Iraq War, the war in Crimea and especially the outright slaughter in Aleppo and other places in Syria clearly weakened this order more than the attack on Ukraine. As a matter of principle, one can say that an order and every norm in general begin to teeter, not from a rule that is violated but when there is an insufficient response to the violation. The norm that one should not kill is not undermined by murder; it is shrugging acceptance in response to murderous crimes that kills the norm.

The future of the international order thus depends on the reaction of the global community and on the outcome of the norm-violating behavior. It is impossible to say today whether the West can maintain its unity when the cost of the sanctions becomes palpable, what role China will play, and what the result will be of the war in Ukraine. It is impossible to make trustworthy predictions. But we can imagine scenarios, and there are at least four reasonable ones.

I’ll begin with a losing scenario that I consider improbable: a compromise-oriented peace deal between Ukraine and Russia. It is unlikely because the Ukrainians are fighting resolutely for their country’s unity and would only be willing to make concessions if they faced a hopeless situation. But given precisely that situation, why would Putin act in contradiction to all of his objectives? If he can’t completely control Ukraine politically after this war, what remains of Ukraine will move politically and militarily toward the West with unstoppable speed. There is much that suggests this war will be decided militarily.

In the first scenario, the war ends quickly and Russia establishes a vassal state on Ukrainian territory. The Ukrainian population, which has already endured harsh affliction in the past, accepts this fate. In this situation, an East-West conflict will rise again in Europe. European institutions will grow stronger, and authoritarian populism will be marginalized, at least in its present, Putin-like form. Russia would struggle economically and repression would grow.

At a global political level, the effects of this outcome are less clear. Can the U.S. stay the course? If yes, then NATO and other organizations of the postwar order will grow stronger. But when the Trumpists ultimately prevail, Europe will have no other choice but to build up its defensive capacity, including the requisite infrastructure for decision-making. This Europe would not only be regalvanized but would also be very different. China would hang back and, when given the opportunity, use the new conflict situation to increase its own influence and achieve its own interests. As a result, the world order would become regionalized, with China occupying a central position.

Another scenario that is at least as likely is one in which Russia wins the war quickly and establishes a Russia-friendly regime in Ukraine, but a part of the Ukrainian population engages in a civil war that Russia is unable to control. In this case, the domestic pressure on, and the economic costs for, Putin’s regime would increase so dramatically that it would probably only survive with China’s support. Russia itself would then lose its autonomy and become part of the Chinese sphere of influence. The conflict would not only shape events in Europe but also politics around the world, and it would create a new bipolarity. In this case, one can expect a kind of updated version of the postwar order: strong international institutions in the West and the long-term weakening of global institutions.

In the third scenario, the liberal order as it arose after 1989 would actually reemerge with strong global institutions. In this case, the passionate Ukrainian resistance would prove to be effective and long-lasting. The war would drag on for some time. Destruction in Ukraine would reach a horrific scale, but the consequences in Russia would also be dramatic. Putin’s regime might fall in the face of growing resistance in Russia, igniting a new push toward democratization in Eastern Europe. Even China might be unable to completely avert such a wave of liberalization.

All that could lead to revitalization of the post-1989 order, including strong regulation of global processes. Within liberal societies, the line between globalization’s losers and winners would probably sharpen. And there is no guarantee that democratic forces would in fact gain the upper hand were Putin to be toppled. In any case, it would probably not be a particularly stable order.

Whether there is a regionalization of global politics, a new edition of the postwar order, or a revival of the post-1989 liberal order depends on our response to the Russian war. However reactionary and brutal this war may be, it shares one feature with other violations of norms: It is not the violation itself but the reaction to it that determines an order’s future.