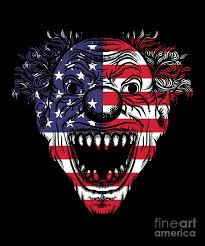 America is the biggest conspirator, the one that lies in the depths of history. It is an insolent thief that steals homelands and then punishes their indigenous people. Just as pandemics and earthquakes do, when America enters a land it ruins it. Its relations, its friendships and even its wars are immoral. It kills people and destroys present and future generations. With diaspora groups, America created its own people to uproot and replace Native Americans. Moreover, it expanded politically, economically and militarily through crude interventions, occupations, sieges and sanctions, resulting in the massive death of helpless societies.

America, a country that overturned several revolutions, regimes, governments and national leaders, became a stressful entity that threatens the security of others. It does not realize that brutality will lead to its erosion, and that if there is a cowboy that kills three ants with one shot from 50 meters away, there are also those who will kill him with one spit, a weapon that is faster than sound and also transcontinental. Tempted by its ferocity in fighting to its last breath, the U.S. provoked the Russian Federation through Ukraine, thus awakening the right of generations to lift the burden of the international and regional systems and re-humanize international relations.

America, the greatest evil, is losing the pillars of its arrogance. It is therefore no longer able to complete its journey, as it is no longer necessary to interrupt effective transformations. In contrast, a generation that is rebelling against its factual slavery is reformulating itself in a world of freedom, justice and dignity. As alternatives for old generations and ideas, new generations are born in the throes of change, holding new national humanistic ideas and premises, and aspiring for human relations, interests and benefits that prefer a loaf of bread and healthy bodies over nuclear-tipped missiles. They also want worlds that are not divided into first and third, or into rich with the wealth of others and poor because their wealth was stolen. These huge changes are necessary and inevitable.

America will become the skeleton of the last cowboy, and the people of the world will erase the history of their slavery from their generations’ present and future. They will head toward each other voluntarily and peacefully in order to build relations based on solidarity, benefits, progress and prosperity. They will create a world for new generations, each of which rises from the heart of its environment and experiences. The historic Russian-Ukrainian war, which expanded to involve Europe, Asia, Africa and Latin America, is a painful birth of a new world, characterized by a wave of peace and love that will lift the weight of the unipolar regime and all forms of aggressive polarization. This is how things should be explained from an Iraqi point of view. The price that Iraq paid — the revolution of October 2019 — was an inevitable response to an international and regional reality that is changing in Iraq; victory over injustice was the immediate fruit.

Short-sighted remnants of despicable executioners in Iraq and those that are corrupted and have little faith see things otherwise. They did not see the meaning of Iraq’s October revolution, which resulted in thousands of deaths, injuries, comas and disabilities. The revolutionaries were chanting “We want a homeland,” which is a human national phenomenon that blew up the international and regional systems, and a sign of upcoming Iraqi changes claimed by the revolutionaries in the liberation squares. It is the reaction of the Iraqi land that refuses that the parties and agents shed the blood of the October revolutionists with their own hands. It is also God’s wrath against doctrines and references that rebelled against its heavenly value and adopted, instead, lies and machinations as blind ideologies throughout their history.