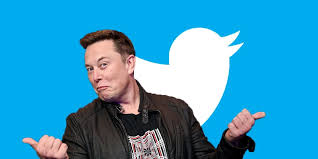 Elon Musk considers it “morally wrong and flat out stupid” that Donald Trump was banned from Twitter. What would really be stupid, however, would be to bring Trump back, because he is a threat to democracy.

You really don’t think of Elon Musk as someone with below-average intelligence. The tech billionaire has highly ambitious goals and is fulfilling them with Tesla, SpaceX, Starlink … and Twitter.

What is not intelligent, however, is that Musk considers it “morally wrong and flat out stupid” that Donald Trump was banned from the messaging platform that Musk just bought for $44 billion*, and that he wants to lift that ban. It also does not make a very convincing argument to say that many Americans did not agree with banning Trump from Twitter and that we can no longer hear his voice.

What, after all, did the former U.S. president use his Twitter account for? For lies, hate speech and a thinly veiled call to storm the Capitol. Which then actually took place. Trump uses his freedom of expression to eliminate freedom of expression. To this day, he has not recognized the results of a democratic election. He has tried everything to dismantle the institutional structure of the United States. No deception, no extortion, no lie is too much for him.

Trump is hollowing out democracy. He is an autocrat and would be Vladimir Putin’s best buddy. Musk should think twice about whether he wants to use Twitter to give Trump a boost in the next presidential election. Trump had 80 million followers on Twitter. He doesn’t even want to resume his account, he says. But since his own network, Social Truth, is languishing, you can expect Trump to accept the invitation eventually. He is seeking a return to power.

*Editor’s note: As of May 13, Musk said the deal was “temporarily on hold” while he investigated the percentage of spam accounts.