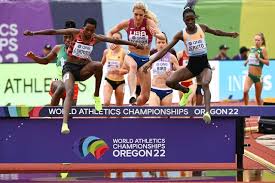 The U.S. is the most successful nation in track and field. However, its own people are hardly aware of their outstanding athletes, even with the world championships about to start. But Germany also has work to do.

The World Track and Field Championships, which begin this Friday and will have as its first highlights men’s and women’s sprinting, are being held in a developing country: the United States. For the first time since the championships debuted in Helsinki, Finland, in 1983 (track and field athletes previously considered the Olympics to be their world championships), the most successful track and field athletes in the world will take the stage in front of their fans at home.

At the 17 world championships to date, runners, throwers and jumpers from the U.S. have won 169 titles and 380 medals. That’s more than twice as many as Germany, whose combined statistics include former East and West Germany and which ranks second in the medal tables. Over the next 10 days, Americans will likely increase their lead with outstanding successes, whereas in the German team, only long jumper, Malaika Mihambo, the Olympic champion, is considered a favorite for the title.

All Hope Centers on Eugene, Oregon

America’s track and field athletes still have to hope, however, that their home crowd even notices them and their achievements. Stars from this sport are great unknowns in the U.S. Every four years at the Olympics, America’s sports fans let themselves be distracted from the stream of entertainment provided by football, basketball and baseball. Outside of the summer games, however, the core sport of the Olympics exists on the margins. Universities, especially the University of Oregon in Eugene and sponsor Nike, ensure that track and field continues to exist.

Pole vaulter Sandi Morris — silver medalist at the Rio Olympics in 2016 and at the world championships in London in 2017 and Doha in 2019, and two-time indoor world champion — says that she is often asked incredulously if she really is a professional track and field athlete. If she can really make a living from it. Olympic gold medalist Mondo Duplantis, the high flyer in the men’s pole vault, lives in both worlds. In Sweden, his mother’s home country for which he also competes, he is recognized on the street. In the U.S., where he was born and raised and lives during the winter, he enjoys relative anonymity, he said nonchalantly.

It’s not just the athletes who hope track and field —and themselves — find the spotlight. World Athletes, the global federation led by Brit Sebastian Coe, finally wants to tap into the potential of this market. The triumphs of American athletes are clearly not enough. Hope is now fixed on the small college town of Eugene, Oregon, and its track and field enthusiasts.

They call their town “Track Town, U.S.A.,” which is the heartland and epicenter of American track and field. If enthusiasm is transmitted from Hayward Field and the gleaming new stadium to the TV-watching public, that would be more than an economic relief for the international federation. The questionable process by which the U.S. was awarded the world championships would be legitimized in hindsight were Eugene to become a place of celebration in 2022.

Europe is largely removed from these world championships. The nine-hour time difference between the U.S. West Coast and central Europe means that the most exciting finals take place in the very early morning hours for the Old World audience. Many will sleep in instead of setting an alarm to wake up for the event. The audience, too, needs to reserve its energy for the European championships in Munich. They will likely be better received in Germany and Europe than the world championships, also because of the greater chances of success. But here, too, track and field desperately needs to find a way to counter its lack of presence and relevance.