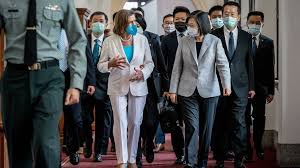 U.S. House Speaker Nancy Pelosi’s visit to Taiwan has caused a stir in U.S.-China relations. The visit appears to be more of a political stunt by Pelosi than a carefully planned diplomatic move. From China’s point of view, the timing of the visit ahead of the Communist Party’s upcoming congress is the worst possible. President Xi Jinping reportedly warned President Joe Biden in a strong tone, but Biden did not stop Pelosi on the grounds of separation of powers. Thus China, its reputation crushed, carried out a military exercise encircling Taiwan. This time, the Chinese People’s Liberation Army crossed Taiwan’s mediation line for the first time and dropped missiles into Japan’s exclusive economic zone, both rather provocative moves.

China responded to Pelosi’s visit with military force. Furthermore, there is a possibility that China will normalize military exercises in the vicinity of Taiwan and deploy troops on the opposite coast of Taiwan in the future. This visit has given China an excuse to do so. Even without this visit, however, China is steadily laying the groundwork for an invasion of Taiwan, and the focus will be on whether the U.S. and its allies can deter China. In response, Asahi Shimbun states that “Japan needs to strongly urge the U.S. to refrain from actions that unnecessarily increase tensions and destabilize the region.” But since it is China that has increased tensions, it feels strange to call for restraint on the U.S. As Sankei Shimbun and Nikkei Shimbun argue, Japan should move in the direction of cooperating with the U.S. and therefore deterring China.

While the U.S. military is the most powerful in the world, when limited to East Asia, the Chinese military is becoming superior. If China were to invade Taiwan today, it is doubtful that the U.S. military would be able to hold it off. Therefore, the U.S. is trying to balance against China by increasing its military power in the East Asian region and realigning its alliances. In June, two U.S. senators introduced a bill to strengthen U.S. support for Taiwan, urging the increase of Taiwan’s defense capabilities. Last September, the U.S., the U.K. and Australia formed a military alliance, AUKUS, to supply nuclear submarines to Australia in preparation for China’s maritime expansion. In the future, Japan will be expected to make a commensurate military contribution.

This time, Prime Minister Fumio Kishida made Japan’s position clear by holding direct talks with Pelosi during her visit to Japan. This contrasts with South Korean President Yoon Suk-yeol, who avoided direct talks. Last year, the late former Japanese Prime Minister Shinzo Abe said “a Taiwan emergency is a Japanese emergency,” which is said to have angered China, but the time has come for Japan to take the Taiwan issue seriously.