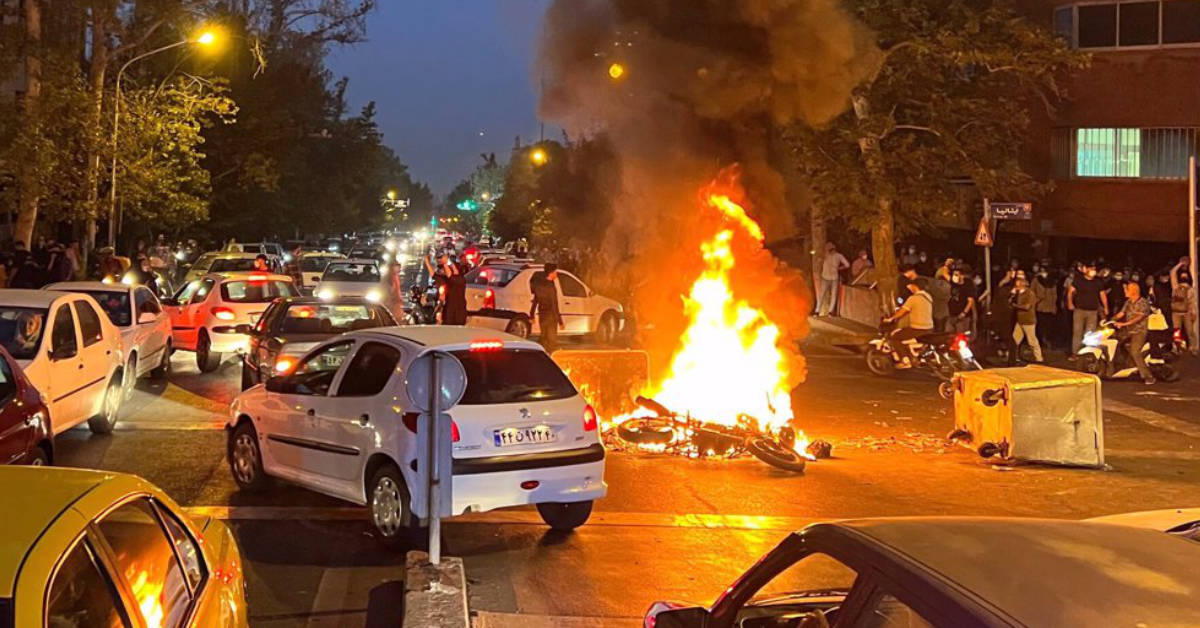 Protests across Iran are entering their second week. The protests have erupted over the death of 22-year-old student Mahsa Amini, who was taken to a police station for wearing her hijab in an “improper” way.

On Sept. 16, the international media reported Amini’s death, citing the Iranian news agency Fars News. Tehran police said Amini had suffered a heart attack after being taken into custody to be “educated” about moral values. Amini was immediately transferred to a hospital in Tehran, where she died.

Few people have believed the police explanation. Mahsa Alimardani, for example, an activist with the human rights organization ARTICLE 19, tweeted, “Tehran’s police announced that Mahsa Amini ‘suddenly suffered from a heart problem’ — as if a 22-year-old woman has a heart attack that causes a coma and disfigurement naturally. Iranian media are publishing this nonsense as fact.

Several witnesses said that Amini was beaten in the police van and was hit in the head. The police denied the allegations and released closed-circuit television footage from the police station showing Amini talking to a police officer, then grabbing her head and falling over. The police thus claimed the she died from a sudden heart attack. Iran’s interior minister also speculated that the woman had some kind of a health problem.

Amini’s father told Emtedad that his daughter did not have any health issues and claimed that strange bruises on her legs were discovered following her death. He believes the police station video was fabricated.

Meanwhile, The Guardian reported that the head of Iran’s morality police was suspended. Moreover, “a CT scan of Amini’s head showed a bone fracture, hemorrhage, and brain edema, seemingly confirming that she died due to being struck on the head.”

Amini’s death is not the first such case. In 2003, Iranian-Canadian photojournalist Zahra Kazemi, 55 , died under questionable circumstances in a Tehran hospital where she had been taken from Evin prison. A commission appointed by then Iranian President Mohammad Khatami found that Kazemi died of a brain hemorrhage caused by a head injury. Iranian authorities denied allegations they had tortured Kazemi.

There were protests in Amini’s hometown of Sekez, and in Sanandaj, the capital of Iran’s Kurdistan Province, which led to clashes with the police. Soon after, women in Tehran took to the streets chanting anti-government slogans, tearing off their hijabs and setting them on fire. University students protested on campuses in nearly every province of Iran, including the religious provinces of Qom and Mashhad, and in several cities in Iranian Azerbaijan.

While previous protests were local and posed no threat to Iran’s political system, these protests are different, having been triggered by Amini’s death. However, the demonstrations have now become purely political and are openly supported and nurtured from abroad. And these outside forces are acting openly.

For instance, in an interview published by The New Yorker, Iranian dissident Masih Alinejad claimed to be in charge of the protests organized by women in Iran.

“I’m leading this movement,” said Alinejad. “The Iranian regime will be brought down by women. I believe this,” she said.

After being driven into exile 13 years ago, Alinejad moved to New York. She lives in a secret location guarded by the FBI and has more than 10 million followers on social media. Recently, she has become one of the most influential thought leaders in Iran. Alinejad began the fight against hijabs in 2014 with an online campaign called “My Stealthy Freedom.” The campaign’s website published photos and videos of Iranian women without hijabs. Alinejad first organized mass demonstrations by Iranian women against the hijab in the spring of 2017.

“Last week, when protests exploded following the death of Mahsa Amini, who appears to have been beaten to death by the regime’s morality police, Alinejad saw years of organizing finally coming to fruition,” The New Yorker reported.

In my view, however, Alinejad is merely the frontman, or rather the frontwoman, of a protest movement organized by pro-American clientele in Iran — and it is quite large. Indeed, it is not only the Iranian women, but the youth who are unhappy with religious excesses.

In addition, immediately after the protests began, political movement sleeper cells that are banned in Iran became active. These involve the Komala Party of Iranian Kurdistan, the Kurdistan Free Life Party and the People’s Mojahedin Organization of Iran.

The Iranian authorities began to slow the internet then shut it down altogether to quell the protests. However, in response, the U.S. provided satellite internet services to Iran through Elon Musk’s Starlink. America also imposed the toughest available sanctions on four Iranian defense companies that produce combat drones.

By all indications, the Americans used the Amini incident to increase pressure on Iran, which has recently become far closer to Russia. Iranian drones operated by Russian forces are now terrifying the Ukrainian military, for exaxmple. Moreover, Iran has become a member of the Shanghai Cooperation Organization. Meanwhile, Iranian President Ebrahim Raisi recently delivered a powerful address at the United Nations General Assembly in New York and held important meetings with several European heads of state.

The wave of mass protests in Iran is now subsiding. Millions of supporters of Tehran’s government recently even staged a rally.

I don’t condone the Iranian custodians of Sharia morals in the slightest. Beating women and torturing them to death is disgraceful for any man, no matter how devout a Muslim he is. However, this is not an excuse to turn a blind eye to America’s subversive tricks. That is, currently, in Iran, the U.S. is doing what it has always done: Noting a problem and blowing it out of proportion. But it is important to remember that America’s goal is not to find a solution, but to pursue its own interests. In fact, the U.S. doesn’t give a damn about the unfortunate death of the student or the treatment of Iranian women.