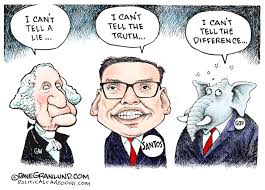 Imagine the triumph of the Republicans in their efforts to snatch the seat in New York’s 3rd Congressional District from the Democrats. They had found the perfect candidate in the person of George Santos, an accomplished businessman of Jewish descent, loaded with degrees, who had worked for Goldman Sachs and Citigroup, and who had even started a charitable organization for abandoned animals.

Against all odds, Santos beat the incumbent Democrat in the midterm election on Nov. 8 and has since defined himself as the total incarnation of the American dream.

The only problem: Santos lied across the board about his background. Starting right away with the small animal rescue, there is no trace of Friends of Pets United, his group to save puppies and kittens.

Next, Santos never worked for Citigroup or Goldman Sachs. He did not receive a degree from Baruch College or, apparently, any other.

Santos’ company, Devolder Organization LLC, appears to be fraudulent. Founded in 2021, Devolder reaped between $3.5 million and $11.5 million through real estate transactions and consulting contracts. It was dissolved in 2022 after failing to file an annual financial report.

Incidentally, no one knows where or how Santos got the money to run and win a congressional election in a major New York district.

And to add another layer, journalists from The New York Times found no evidence to substantiate the story that Santos’ grandparents were Ukrainian Jews who twice fled persecution during World War II.

But the Republican Jewish Coalition has denounced Santos for misrepresenting his heritage and banned him from future events.

In the face of these lies, the representative-elect, who looks more and more like a mythomaniac, decided to make the rounds of media outlets to try to clear the air and, most of all, to defend himself. First, Santos told the New York Post, “My sins here are embellishing my resume. I’m sorry.”

On his Jewish heritage, Santos said that he did not consider himself Jewish, but rather “Jew-ish,” referring to his religious upbringing that was Catholic rather than Jewish.

The dubious wordplay is clearly rendered ineffective when one searches for video excerpts in which Santos extols his Jewish ancestry.

Unconvincing and refusing to comment on his lies, Santos next appeared on polemical host Tucker Carlson’s show on Fox News where Republican guests are generally given broad latitude to say whatever they want.

However, that night, Carlson was replaced by Tulsi Gabbard, a former Democratic congresswoman from Hawaii who once ran for the presidential nomination on the blue team but has since veered severely Republican and is now a television host.

The interview was a surprisingly relentless pummeling of Santos.

“[You] tell blatant lies,” Gabbard said. “Not embellishments. … I think … that you don’t really seem to be taking this seriously. You’ve apologized, you said you’ve made mistakes, but you’ve outright lied.”

Visibly surprised by such a barrage, Santos replied, “Look, I agree with what you are saying. … We can debate my resume and how I worked with firms such as Goldman [Sachs] and Citigroup.”

“Is it debatable or is it just false?” Gabbard insisted.

Then came the final blow from the Fox News host: “It’s hard to imagine how [your voters] could possibly trust your explanations when you’re not really even willing to admit the depth of your deception to them.”

The Party of Silence

But what about the Republican Party itself regarding its protégé? How could Santos sneak through with no checks on his background to win the Republican nomination?

Nassau County District Attorney Anne Donnelly, a Republican, has just opened an investigation. She said in a statement, “The numerous fabrications and inconsistencies associated with Congressman-Elect Santos are nothing short of stunning. The residents of Nassau County and other parts of the Third District must have an honest and accountable representative in Congress.”

As for the rest of the party, there is only the soft, nervous sound of crickets.

The First Test of Republican Integrity

On Jan. 3, the Republicans will take control of the House of Representatives and Santos will take the congressional oath of office, if the pattern continues. For the moment, there is no guarantee that Kevin McCarthy will be elected speaker of the House, as there is dissent within the party.

But the Republicans need all their elected representatives in order to chart a course against the Democrats. With their slim majority of 222 seats, just four more than the minimum, they cannot afford to abandon anyone.

The party that often defines itself as one of law and order is, then, one of double standards where integrity is concerned. The group of Republicans led by Rep. Jim Jordan, chairman of the House Judiciary Committee, is in favor of pulling out all the stops against the White House. Thus, he will put all his efforts into investigating the Biden family, with Hunter, the son, first in line.

Cynics will assert that after Herschel Walker, the Republican candidate who lost the Senate race in Georgia, no one should be surprised by the actions of the party.

Walker, a former football star, who had also boasted of having worked in certain fields and run certain businesses, was soon exposed. His dubious abortion stories did nothing to help. Voters thus had more faith in his Democratic opponent.

The only difference, here, is that Walker’s skeletons emerged during two Senate campaigns. In Santos’ case, all of his lies came to light after his election.

The Republican Party has a serious dilemma: Punish Santos, or turn a deaf ear? Focusing, for now, on the second option, to condemn him would only amplify his falsehoods and continue to fuel a story Republicans would rather nip in the bud.

It is not surprising, then, that the GOP top brass have yet to utter a word about the Santos affair. It must be said that the majority of them never said much, either, against a leader who told more than 30,000 lies and falsehoods during his four years in office and galvanized his loyalist troops in the hopes of overturning the results of the 2020 election under the false pretext that it was stolen.

But that’s another story …

About Reg Moss 79 Articles
Reg is a writer, teacher, and translator with an interest in social issues especially as pertains to education and matters of race, class, gender, immigration, etc.