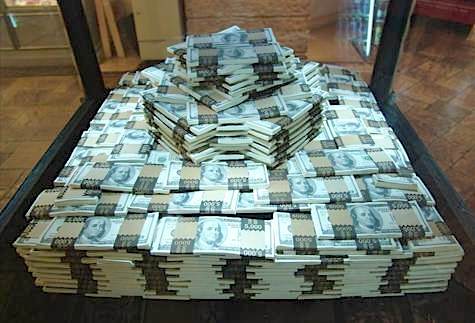 Ill-fated signs — like an eclipse before a bad harvest, balls of fire in the sky before the birth of some dictator, or the strange planetary alignment on Mourinho’s[1] birthday — confirm the harshness of the financial crises. In the United States, the Treasury and the Federal Reserve have had to abort the printing of almost 1,100 units of the 100 dollar bill, known as a benjamin;[2] not because it is the cost of a bottle of cava[3], but for the portrait of Benjamin Franklin found on the face of the bill. An error in the quality of the paper has provoked this singular case of “monicide.”[4] Money does not smell (Pecunia non olet),[5] as Emperor Vespasian explained when an official reproached him for imposing a tribute on public latrines. Perhaps it is experiencing death before birth, during a time when liquidity is needed more (something the Spanish Savings Banks should be asked about). While banks are rationing credits, it turns out that just like in Ali Baba’s cave, the vaults of The American Treasury have accumulated $1.1 million of useless benjamins. It hurts just thinking about how frustrating this peculiar situation has become.

Gila[6] was also probably wondering what “the boss” of the Treasury in Fort Worth is going to do with so much paper. In one of his greguerías, [7] Gómez de la Serna[8] defined banknotes as “the sweat of the world’s blotting paper.” To say that the governments of Greece and Ireland have sweated ink hits the nail on the head. It is possible to say that the governments of Portugal, Spain and Italy may have done the same. There seems to be enough [banknotes] to make scented towelettes. Of course, it gives cause for speculation. Coffee shop politics would say that it is the biggest unnecessary waste that there is; a scriptwriter would write scenes in which cohorts of orthodox monetarists led by Axel Weber[9] would try to attack the piles of money defended by expansionist Barack Obama and Ben Bernanke; while José Blanco[10] would ask for the damaged benjamins, just in case he needs to slip them to the air traffic controllers — although it probably would not arrive in time for pay day.

Still the provincial perplexity remains: How is it possible that with so much digital technology, after centuries of experience ironing notes, the United States has to throw $1.1 million in benjamins in the garbage because the paper folded and a small piece was left blank? Let “the boss” of Gila come and explain that to us.

[1] Mourinho: Current coach of Real Madrid, a team in the Spanish Football league.

[3] Cava: Spanish sparkling wine, also referred to as a benjamin in Spain.

[4] monicide: Refers to the killing or destruction of money.

[6] Miguel Gila: Spanish comedian, famous for monologues in the form of one-sided phone conversations, where he would always ask for “el encargao” (colloquial for the boss or the person in charge).

[7] greguerías: Spanish literary device which is a mixture of a pun and a metaphor.