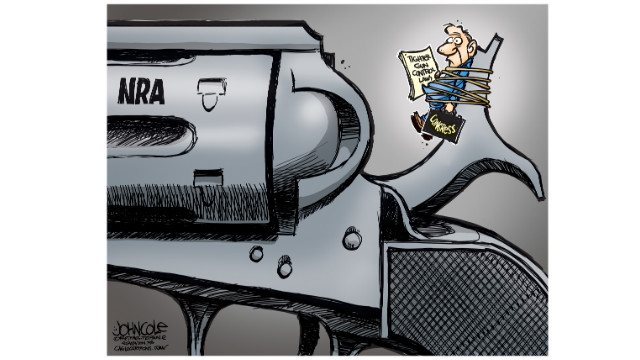 After the latest massacres of the past few months — after Aurora, Oak Creek and Newtown — it appeared a matter of healthy common sense that Congress would seek ways and means to put the brakes on the circulation of firearms. Every day new deadly acts of violence are added and with them, new arguments for gun control: In the mere four months since the rampage at Sandy Hook Elementary School in Newtown, 3,300 people in the U.S. have died of bullet wounds.

And yet the debate would not have occurred without grassroots involvement. The vote with which the Senate opened the debate on Thursday is not thanks to politicians, but instead thanks to civil society. Churches, civil rights groups and primarily the families of victims have pooled their forces to force their legislators to do their job.

It helped that the overwhelming majority of Americans — including the Republican Party’s base — is demanding more gun control in the meantime. But in spite of that, it remained open until the last moment whether the debate would even come into being. When it comes to guns, a large number of U.S. legislators do not listen to those who elect them, but rather to those who finance them — in this case, the gun lobby.

The gun lobby’s largest organization, the National Rifle Association, controls and corrupts the whole political process, from the election to the work of the representatives to the media campaigns in which they deftly combine patriotism and scare tactics and edit out the $6 billion business with firearms and ammunition. It is gratifying that the U.S. public no longer wants to be tethered to the cart of the NRA.

But at the same time, the bad news is obvious. It is a democratic tragedy that 31 senators voted against a debate on Thursday. And it is shattering that, of the 68 others who are willing to debate, more than a few of them consider any additional gun control law to be unconstitutional.

Even if the Senate does finally pass a law that will likely be limited to background checks and not contain any prohibition on dealing in semi-automatic weapons of war, it is improbable that it would overcome the hurdle of the Republican majority in the House of Representatives. A beginning, therefore, not a breakthrough.