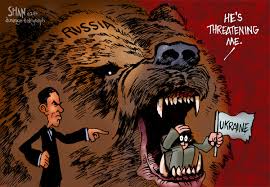 The humanitarian crisis continues to worsen in the war-torn region of eastern Ukraine. As the leader of the Western powers, the United States contends with Russia, escalating the situation with sanctions after sanctions. The topics of settling this conflict, easing this crisis, preventing the Ukrainian people from facing an ever greater disaster and dragging down the world’s economy have become pressing issues that the international community must address directly. War and sanctions will not resolve the crisis in Ukraine. The only solution is the immediate initiation of peace dialogues to effectively reach a balance of interests between all parties.

Going into war is extremely tempting for the Ukrainian government. President Petro Poroshenko will not simply back away from issues regarding the territorial integrity of his nation. However, the Ukrainian government must understand that war will not be a solution to the problem in the east. Behind the rebels is Russia, and Russia will not ignore a large number of casualties and the displacement of its people, and especially will not allow Ukraine, as a forefront of NATO, to be a threat to its national security. Even without troop deployments or cross-border, long-range attacks, Russia can send the Ukrainian government into crisis by merely releasing “volunteers.” As the leading force for initiating and supporting this war, the U.S. is too distant and lacks the political willpower to start a real battle with Russia that will have any concrete impact on the situation. Moreover, the European powers do not wish to see their doorstep plunged into a constant state of war. The issue does not seem to have a clear outcome given the reversal of the situation on the battlefield in the past few days and the American and European stances.

Evidently, Ukraine cannot win this war as long as the U.S. and NATO do not directly deploy troops. The U.S. and Russia are fighting a proxy war, unfortunately with Ukraine in the middle. If the conflicts continue, Ukraine cannot sustain itself as a nation. Russian President Vladimir Putin has suggested unconditional truce talks multiple times, while the European powers have hoped to contribute to negotiations as soon as possible. The time has come for Ukraine to independently make this crucial decision on its own path toward war or peace.

Similarly, imposing sanctions does not resolve the crisis in Ukraine. The U.S. hoped to rely on stepping up its economic sanctions to defeat Russia, but pressuring Russia to concede its core national interests with sanctions could simply be wishful thinking. As the leader of the Western powers, the U.S. has repeatedly imposed sanctions as a weapon on smaller nations, but when have the sanctioned countries ever surrendered? Not to mention that Russia is a superpower in possession of nuclear weapons that never admits defeat. From historical experience, Russian nationalism and patriotism only strengthen under more stringent foreign demands. The more united their political parties are, the more difficult it is to change the political environment in Russia and defeat Putin through sanctions. Sanctions create a vicious cycle that will only lead to mutual defeat. This is the reason why China has never supported the use of sanctions.

Developments have clearly shown that holding peace talks is the only solution to alleviate the crisis in Ukraine. The United Nations, the Organization for Security and Cooperation in Europe and other international mechanisms should take immediate actions. China also should demonstrate its position as a “responsible power” by conducting active diplomacy to encourage all parties to quickly sit down and carry out a dialogue among equals. Currently, the biggest obstacle seems to be the U.S. The U.S. must recognize that continuing the fights and sanctions would ultimately undermine its own strategic interests and that achieving containment of Russia while adhering to the European targets is unrealistic. European powers should immediately jump off the American “military bandwagon,” stopping the U.S. from kidnapping them and discontinuing their foolish self-destructive behaviors.

To facilitate the progress of peace talks, each side should seriously consider China’s proposal to “take into consideration the history and the reality, and accommodate the legitimate rights, interests and aspirations of various regions and ethnic groups within Ukraine, as well as the legitimate concerns of all parties, so as to achieve a balance of their interests.” Former U.S. Secretary of State Henry Kissinger’s idea that Ukraine cannot be a “part of an East-West confrontation” but rather “a bridge between them” demonstrates tremendous political wisdom, and it should be considered as a basis for the dialogue between the two sides. Ultimately, the involved parties must truly abandon the zero-sum mentality and the idea of a cold war. Only by allowing space for others' security and development can one guarantee its own security and development.