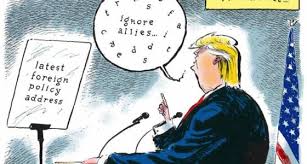 Unfortunately, up to 57 percent of all Americans agree with the opinion that the United States should first secure its own interests, and only after that, it should help others, writes the director of the German Marshall Fund of the United States office in Warsaw.*

If we take him seriously, Donald Trump is ready to blight a fundamental NATO rule: all for one and one for all. In an interview with The New York Times, Trump said that if Russia attacked the Baltic states, as president, he would not see it as an attack on the U.S. and would not react too quickly. As the president, he would check first what the Baltic states had done recently for the U.S., and only after that, he would take steps toward helping them. Such an executive way of thinking undermines not only the system of alliances, which has been built by the U.S. since the end of World War II, but also the security of all of the United States’ allies – including Poland.

If he wins the elections in November, Trump would be the first president of the United States after World War II who would want to end the U.S. role as a guardian of world peace. His slogan “America First” demonstrates a willingness to dramatically reduce the United States’ impact on the world, and the de facto beginning of its isolationism.

Treating Trump’s ideas seriously means that NATO’s deterrence policy, which has finally been implemented as a result of decisions at the Warsaw summit, will collapse. This policy states that any enemy that invades any one of NATO’s member countries will elicit a response from each military of the countries in the organization. The aim of the decisions made during the Warsaw summit about sending troops (including American troops) to Poland and the Baltic states was to strengthen this rule so Russia would know that if it started a war it would be defeated because of U.S. involvement. If Trump wanted to first check what Poland had done for the U.S. before helping Poland, it would destroy the deterrence policy which is based on the rule of all for one and one for all.

Those who are trying to calm those concerned by saying that there is nothing to fear because Trump is playing to the gallery as part of his campaign, and that in the White House he would be encircled by experienced advisers and controlled by strong institutions, are denying the facts. First, the president of the United States has almost unlimited discretion in the case of the country’s foreign policy. Of course, the Constitution forbids him to decide about peace or war by himself, but after the Sept. 11 attacks, every successive president has become more independent on that score. The way the alliances are sustained also depends on him. Secondly, Trump does not have experienced advisers around him; not only are his people freshmen but they even include the notorious Yanukovych’s adviser. Third, Trump only follows his own intuition despite his lack of experience and knowledge about foreign policy. Therefore, there is reason to be wary of Trump’s ideas about the issues that are really important to Poland’s security because he says things which should alarm us.

The last 70 years without any major wars have been a period of peace. “Pax Americana” is based on strong involvement by the United States in maintaining world peace, which benefits the U.S. and its allies. Trump’s words signal a retreat from that commitment. Unfortunately, as it has already been mentioned, up to 57 percent of all Americans agree with the opinion that the U.S. should first secure its own interests and only after that should it shelp others. The demons of isolationism triggered by Trump present a danger to U.S. allies—even if Hillary Clinton becomes the next president of the United States of America.

*Editor’s note: The German Marshall Fund of the United States is a nonpartisan American public policy think tank and grant-making institution located in Washington, D.C. and dedicated to promoting cooperation and understanding between North America and Europe.

Circulation: 250,000 copies sold per day (Poland has a population of 39 million)

Owner: Presspublica Sp. z.o.o.
Rzeczpospolita is popular among managers, enterpreneurs, specialists, employees of public administration and people at universities. Most readers are between 25 and. Along with the British Guardian newspaper, it has been voted one of the best-designed newspapesr in the world (by the U.S.-based Society for News Design).

Rzeczpospolita used to be printed in broadsheet format, switching to compact on October 16, 2007. It maintains a more elitist and “deadpan” image than, for example, its stronger liberal rival Gazeta Wyborcza. Rzeczpospolita’s political profile is moderately conservative and arguably comparable to that of The Times in Britain, but it does not favor any particular Polish party.