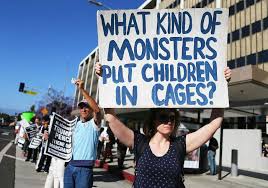 In his fury against illegal immigrants, President Donald Trump lets entire families be torn apart. This practice is a betrayal of American ideals.

The forceful separation of families is one of the tools of the trade of repression. Colonial masters used separation to terrorize foreign peoples. Slaveholders used it to break the resistance of their “commodity”; autocrats, to demoralize the critics of their regimes.

A grotesque variation of this psychological torture is currently taking place at the U.S.-Mexican border. There, Donald Trump’s agents are ripping apart thousands of immigrant families by sending children to different camps, often on the other side of the country. Since October of last year, more than 27,000 children have been separated from their families, most of them in the past two months alone. That’s a rate of 45 children per day.

Some refugees do not see their children for months. Others are still searching or are being deported — without knowing where the rest of their family is.

In the camps, conditions that no U.S. politicians would wish on their own children reign. Children sleep on bunks or in cages. Doctors warn of severe trauma, and not just for the little ones. The parents also suffer.

How safe are the children there? How safe are they if they don’t speak English? If they don’t know where their parents are and when they will see them again, if at all? Just how safe, actually, are people who flee from violence at home only to land in the midst of another type of violence? For them, the U.S. was the last hope. Will they now lose this hope as well?

This policy of the U.S. government is the antithesis to America. At least it is to the idea of America as a nation of refuge, as carved into the pedestal of the Statue of Liberty.

Human Rights Do Not Interest Trump

The United Nations has accused the United States of human rights violations. But human rights are not of interest to Trump. He admires autocrats more than he does allies, and brutal autocracy more than empathy and selflessness. He justifies the suffering of others with lies, and is too cowardly to stand by his disgraceful policy. Instead he blames the Democrats; he is only following their laws, he says.

Even Barack Obama took a hard stand on immigration, but he balked at torturing families. Trump and his attorney general, Jeff Sessions, were the first to order a policy of “zero tolerance,” which first criminalizes migrants and then deprives them of their children on this basis. Sessions even had the chutzpah to justify this policy with a Bible verse that was invoked by those who advocated slavery.

What’s the backdrop for this production? Trump wants his wall with Mexico. Just as the “Dreamers” did, the children now serve him as hostages with which to blackmail Congress into financing his project.* This way he can assure his re-election by energizing his base.

The Goal is Clear

There’s a method to the escalation. It began with the travel ban for certain Muslim countries. Then came the “Dreamer” drama, which terrified America’s Latino communities. Now it is the babies of Central American asylum seekers who, as Trump falsely claimed this weekend, would later become members of the notorious gang MS-13.

At the same time, Sessions is working to completely abolish U.S. asylum law. Violence, persecution, murder: no reason for flight should qualify anyone as more than a legal immigrant, Sessions argues. He also wants to retroactively cancel certain citizenships, if the citizens cannot prove they have enough “faith” in the U.S. Trump has already named candidates for this treatment: black football players who kneel while the national anthem plays.

The goal is clear. Many hope that Trump will slow down America’s changing demographics in favor of past minorities, restoring the white nation-state in which they live in their imagination.

It is no coincidence that the latest restrictions only affect immigrants from South America and the Middle East, instead of those who come from Europe or look like Trump and the majority of his fans. The racist undertone is as obvious as the creeping moral brutality.

But the story cannot be untold. The uproar gets louder and louder. On Sunday, the American Father’s Day, there were nationwide demonstrations outside the children’s camps. Even the first lady, Melania Trump, offered a timid objection, while Laura Bush was clearer: “It is immoral.”

Donald Trump remained indifferent. “Happy Father’s Day,” he tweeted, spending the rest of the day on the golf course.

*Editor’s note: “Dreamers” is a term used to describe immigrants who would benefit from the proposed Development, Relief and Education for Alien Minors Act, legislation that would allow young immigrants in the country illegally who were brought here as children to remain in the country if they meet certain criteria. The legislation has not yet been approved by Congress.