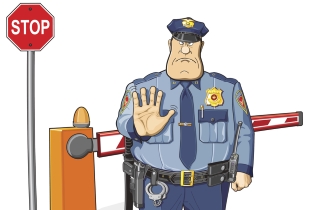 Joe Ramirez. I remember him very well. Right there on the nametag. Large, dark-skinned, a great mustache, proudly wearing the uniform of the United States immigration authority. We were trying to cross the border at Laredo, Texas. In front of us was a fragile, elderly Mexican woman trying to enter the U.S. with her documents stacked inside an old, gray folder. Joe demanded, actually, yelled, at her to show him her passport and visa. The intimidated woman tried to obey while trembling with fear. The border agent, an imperious bureaucrat, became exasperated and shouted. He had no patience and, finally, rejected the woman’s request to enter “The Land of the Free.” He scolded her in Spanglish. He even told her that she was going to die and that she could go to the devil, assuring her that she would never enter the U.S.

Puffing out his bureaucratic chest, he called, “next.” That was me. Wanting to tell him to f--- off, I presented my passport and visa. He smoothed his mustache, reviewed the documents, took my picture, checked my fingerprints and, with disdain, permitted me to enter the U.S. Meanwhile, beside me, the elderly woman that had been rejected sobbed inconsolably. “Son of a bitch,” I thought.

I bet you two to one that Joe Ramirez’s ancestors crossed the Mexican border into the U.S. without documents. He was born in the U.S. and now works to stop others who would try to do the same as his grandparents or parents. This is human misery: “I’m already in, so now close the doors.” Damned immigrants that want to come to the U.S. even without documents and make a life at the expense of us who are already citizens of this country.

There are more than a few. Twenty-eight percent of the U.S. Latino electorate voted for Donald Trump in the 2016 presidential election. An atrocity. I am sure the logic of misery changes you. “I already arrived, so let the next president close the doors because we don’t want competition.”

This brings up the matter of the immigrant caravan crossing Mexico and headed toward the United States. President Trump is using the issue of the immigrant caravan to rally Republicans for the coming congressional elections. This includes his claim, without evidence, that there are members of Middle Eastern terrorist groups traveling in the caravan from Central America. Rubbish. Pure political manipulation. What Trump is exploiting is the residents’ fear that foreigners will come to a country where everyone, with the exception of indigenous Americans, is descended from immigrants. The English Protestants arrived and focused on killing the local population. The Irish Catholics landed later. At that time they were seen as a menace to the first immigrant wave. The Africans, whose involuntary arrival was due to slavery, were always considered subhuman, not deserving of the same rights. Then came the Italians and Jews, who were also regarded as threats to the good traditions of the developing country. Later, the Joe Ramirez family showed up: Latino, Catholic and dark, they were not at the same level as the Europeans who dominated the country.

Today, several Jose Ramirezes are crossing the Mexican border, headed for the U.S. They don’t have the documents to enter the country. However, they count on the illusion, a very American one, of having a better future. They hope that they don't get stopped. But President Trump, of good Anglo-Saxon pedigree, no less than that of German immigrants, hates them. It disgusts him that brown Catholics come to a territory that should exclusively be for white Protestants. As on the golf course, Trump reserves the right of admission for people from “good races.” And to make sure that happens, he delegates the Joe Ramirezes from that country to take care of his territory. Let one of them wield the club to maintain tranquility for the white Protestants. This is human misery. Joes who have no historic memory. The Ramirezes who voted for Trump. The ones who, with their nightsticks, deny their roots.