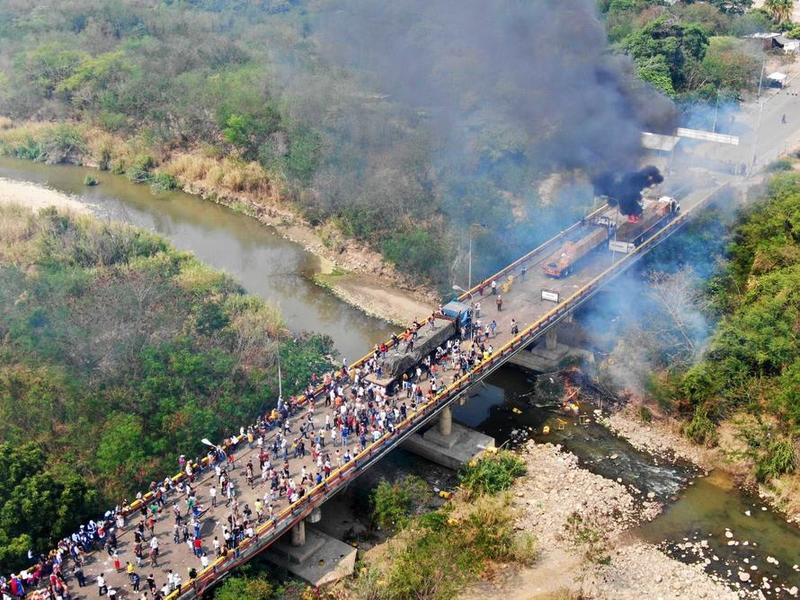 It is not difficult to conclude that the defense of Venezuelan democracy is not at stake. What is at stake is Venezuela’s oil.

What is happening in Venezuela is a tragedy foretold and will probably cause the death of many innocent people. Venezuela is on the verge of a foreign military intervention and the result could be a bloodbath of dramatic proportions. The person who said this is the most well-known opposition leader Henrique Capriles, who stated that the puppet-president, Juan Guaido, is making the Venezuelans cannon fodder.

He knows what he is talking about. He knows, for example, that Hugo Chavez took the fate of the democratic socialist experience of Salvador Allende in Chile very seriously. And, among other measures, he armed the civilian population, creating militias, which obviously could be disarmed, but that very probably such a thing would not occur without some resistance. He also knows that, in spite of the immense suffering that the country is being subjected to from a toxic mixture of internal political mistakes and external pressure, in addition to having to live under an embargo which the United Nations considers condemnable from a humanitarian viewpoint, there continues unabated in the Venezuelan people a feeling of nationalistic pride which vehemently rejects any kind of foreign intervention.

Facing the magnitude of the risk of the destruction of innocent lives, all the democratic Venezuelans who oppose the Bolivarian government* are asking questions to which they only very painfully will have some answer. Why is it that the U.S., embraced by various European countries, is embarking on an aggressive and maximalistic position that makes any negotiated solution useless from the start? Why is the U.S. making ultimatums typical of the imperial times of which, by the way, Portugal has bitter experience? Why was a mediation proposal by Mexico and Uruguay rejected, which had as a starting point the refusal of civil war? Why did a young person, unknown to the Venezuelan people up until some weeks ago, a member of a little party on the extreme right called Voluntad Popular, which was directly involved in the street violence in previous years, proclaim himself to be the president of the Republic after receiving a telephone from the U.S. vice-president? And why were various countries disposed to recognize him as the legitimate president of the country?

The answers will come with time, but what is known is enough to indicate where the answers will come from. It is becoming known, despite being little known in the country, that Juan Guaido and his party of the extreme right who openly advocated for military intervention against the government, have for a long time been favored by Washington to implement the infamous policy of regime change in Venezuela.** And this is linked to the history of U.S. interventions on the continent, a weapon of mass destruction of democracy each time it meant the defense of national sovereignty and questioned the free access of the US to the country’s natural resources. It is not difficult to conclude that the defense of Venezuelan democracy is not at stake. What it at stake is Venezuela’s oil.

Venezuela is the country with the greatest reserves of petroleum in the world (20 percent of the world reserves; the U.S. holds 2 percent). Access to oil in the Middle East led to a blood pact with the most dictatorial country in the region, Saudi Arabia, and the destruction of Iraq, Syria and Libya in North Africa; the next victim could well be Iran. In addition, Middle East oil is closer to China than the U.S, while Venezuelan oil is on the door step.

Access to natural resources varies from one country to another, but the strategic objective has always been the same. In Chile, a bloody dictatorship evolved. More recently in Brazil, the access to immense mineral resources, the Amazon and the pre-salt*** has involved the transformation of another Washington favorite,, Sergio Moro, from unknown trial judge to national and international notoriety through privileged access to data which allowed him to be the justice of the Brazilian extreme left and to open the way for the election of an admitted apologist of dictators and torture who would be willing to sell the country’s riches on the cheap and form a government to which the pro-American favorite of Brazil’s future would belong.

However, the perplexity of many democratic Venezuelans is particularly pertinent for Europe, notably because in the past, Europe was active in the negotiations between the government and the opposition. Europe knew that many of these negotiations failed under pressure from the U.S. So the question here is: You, too, Europe? It is aware that if Europe had been genuinely concerned with democracy, it would have cut off diplomatic relations with Saudi Arabia some time ago. And if Europe had been concerned about the massive death of innocent civilians, it would have long ago stopped selling arms to Saudi Arabia, arms with which that country is carrying out genocide in Yemen. But perhaps Europe hoped that its historical responsibilities to its former colonies would justify some restraint. Why this complete alignment with a policy which measures its success by the level of destruction of countries and lives?

Little by little it will become clear that the reason for this alignment resides in a new cold war which has broken out between the U.S. and China, a cold war which has the Latin American continent as one of its centers, and which, just as the previous cold war, cannot be directly waged between the rival powers, in this case a declining empire and a rising empire. It has to be fought by way of allies, whether it be in the case of right-wing governments in Latin America and European governments, or in another case, Russia. No empire is good for the countries who do not have the power to fully benefit from the rivalry, while many try to obtain an advantage by aligning with those who are closest. And the alignment has to be total to be effective. In other words, the rings need to be sacrificed so as not to lose the fingers. This is as true for Canada as other European countries.

I have been well represented by my country's government in power since 2016.  However, the legitimacy conceded to a puppet-president and to a strategy which will very probably end in a blood bath, leaves me feeling ashamed of my Government.

I just hope that the vast Portuguese community in Venezuela won’t come to suffer from such diplomatic imprudence, so as not to use a more vehement and truer term for this government’s international policy in this case.

*Translator’s note: The Bolivarian Revolution is a political process in Venezuela that was led by Venezuelan President Hugo Chávez, founder of the Fifth Republic Movement and later the United Socialist Party of Venezuela.

** Translator’s note: Juan Guaidó was elected president of the National Assembly on Jan. 5, 2019.

***Translator’s note: Pre-salt oil is considered good quality, although it is found in reserves that are in deep sea areas and under thick layers of salt, requiring large-scale investment to extract it. The pre-salt oil region located off the coast of Brazil is said to contain an abundance of untapped oil.