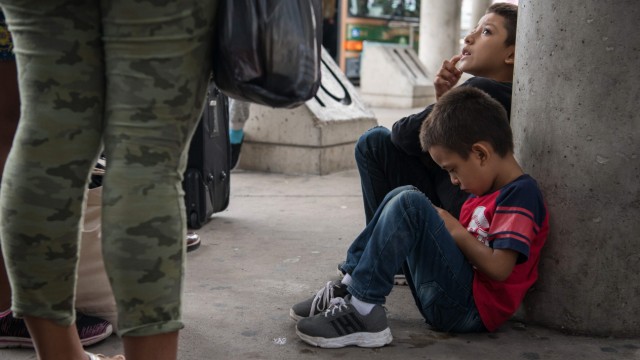 With his policies at the Mexican border, Trump is betraying the values of the of the U.S. — a nation of immigrants. The victims are the children who are often locked in without mattresses, without protection and also, often, without their families.

This is Donald Trump’s America: traumatized children who sleep on cement floors. Children who are given no soap, no toothbrushes, no diapers. Children who are locked up for weeks in cells where, according to law, they should not be permitted to remain for over 72 hours and who don’t even have any contact with their families. Sick children, dirty children, defenseless children.

The conditions documented by a group of lawyers in a detention center for immigrants at the border are disastrous; they are wretched. And they are perhaps the greatest failure of this U.S. administration.

The flow of immigrants would be difficult for even a more capable administration to handle, but it would be attempted more humanely. For months, the people from Central American countries plagued by violence and poverty have been setting off toward the north. In May, 144,000 people illegally crossed the U.S. border.

The U.S. House of Representatives reacted to the crisis and made $4.5 billion available for refugees. Apparently more than 100 children were returned to the controversial camp.

And every action taken by Trump’s overwhelmed agencies makes the situation even worse. That is because this president only knows one answer to all immigration questions: deterrence.

This explains why the U.S. has, for all intents and purposes, suspended the right to asylum. They force the migrants to remain in Mexico while waiting for their petitions to be processed. The sad picture of the dead migrant father and daughter from El Salvador that is now circulating around the world demonstrates that this does not stop many of them from risking illegal border crossings.

Óscar Alberto Martínez Ramírez and his 23-month-old daughter wanted to go to America — and drowned in the waters of the Rio Grande. The father put his arms around his daughter, tried to save her. In vain. Two dead as the symbol of a failed immigration policy.

Separating many children from their families when they reach the U.S. is still part of Trump’s system of deterrence, even though this policy was officially suspended last summer. The authorities move the children from one center to the next, and if family members living in the U.S. come forward to pick up the children, they run the risk of being deported because they are not in the country legally.

The Security Crisis Is a Delusion; The Humanitarian Crisis Is Real

Part of the deterrence is that Trump places one hard-liner after another in responsible positions within his administration. Added to that are the threats Trump utters when he announces the mass deportation of immigrants in the U.S. without documentation who have often been living there for years.

All of this has not diminished the number of immigrants. It is clear that the security crisis at the border declared by Trump is a delusion, but there is a humanitarian crisis that is becoming increasingly more urgent. Joint responsibility is shared by Congress, in which Democrats and Republicans in both chambers have up to now been unwilling to come to a mutual agreement on an immigration package containing more resources for accommodations.

At the same time, it is primarily Trump’s radicalized immigration policy and his venomous rhetoric that make compromise on this question highly difficult overall. Trump is betraying the the values of the United States, which is a nation of immigrants. His policies produce only losers: the country, the immigrants and their abused children.