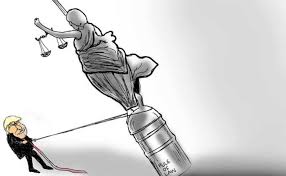 The Trump administration is at the top a stronghold of yes-men, hypocrites, and nepotism. Nowadays, rather apolitical civil servants are the ones who prevent the United States from becoming a banana republic.

Donald Trump's attacks against the Ukrainian investigations of the House of Representatives are becoming more bizarre, and for good reason. Finally, the statements of senior officials about the shadow foreign policy of Trump’s lawyer, former Mayor Rudy Giuliani, have become increasingly problematic for the U.S. president. After the appearance of the former U.S. ambassador to Ukraine, Marie Yovanovitch, who Trump removed from her position, appointing William Taylor as her replacement, it is now clear that the president was guilty of a massive abuse of office.

He pressured Ukraine and withheld millions in aid that had already been approved by Congress to force the Ukrainian president to initiate corruption investigations into Hunter and Joe Biden. Trump wanted to find evidence to support an absurd theory that the manipulations of the U.S. election in 2016 were not carried out by Russia, as the American intelligence community had determined, but allegedly by agents working on servers in Ukraine.

Trump calls the Republicans who turn against his intrigues "human scum." He calls the impeachment investigations a "witch hunt" and " a lynching.” And most recently, in an official statement, the White House has called the officials who testified against Trump "radical unelected bureaucrats." It is high time for rehabilitation.

In fact, it is several largely apolitical and loyal civil servants such as the diplomats Taylor and Yovanovitch, or military men like Alexander Vindman, who is now working in the National Security Council, along with many others, who are currently preventing America from slipping into being a banana republic. And they are willing to endure malicious smear campaigns by Trump's defenders.

Trump is forcing many officials to face internal conflicts. These people have previously faithfully served administrations of every political shade. After all, the American system of government is entirely geared to the president, who stands like the Sun King at the top of a power pyramid and rightly demands loyalty from those who are to implement his policies within the structure. That's is what the Constitution provides.

But what if the president uses corrupt means to gain an advantage over political competitors? What if he weakens institutions and breaks many of the rules designed to ensure that a president does not abuse his power to his advantage? Or when the president lies like a trooper and tries to entangle upright officials in his own lies?

Following Trump's inauguration, the National Park Service felt compelled to refute the crowd number the president boasted of, with photos. Just as National Weather Service officials were forced weeks ago to contradict Trump's repeated assertion that Hurricane Dorian would reach Alabama, to name just a few bizarre examples. And it is thanks to the CIA whistleblower that Trump's blackmail attempt against Ukraine came to light at all.

The Trump administration has become a haven for yes-men, hypocrites, and nepotism at the top, and some institutional leaders are compromised, such as Attorney General and Trump poodle William Barr. And the Republicans in Congress are failing in their constitutional role as government inspectors. But in the administration, below the politically nominated leadership level, there are always upstanding career officials who teach America a lesson about how their institutions should function.

There is an almost cathartic dialectic inherent in all of this. Yes, the president's attacks on the institutions and their nonpartisanship are terrible. But they also lead to a counterreaction and to self-assurance about how a modern democratic state should work. Trump acts like a contrast agent because suddenly many Americans realize what a finely balanced and admirable system they have.

How many in the U.S. knew what a cleverly constructed whistleblower mechanism there is within the various government departments? It is designed to protect whistleblowers from being pressured, and it has worked perfectly fine in the case of the Ukraine revelations.

It's a bit like the Roman Empire: Only in decline do people realize what works well. Only Trump's attacks on the institutions make it clear to many Americans inside and outside the government that it is worth fighting for their integrity.

Of course, the U.S. administration has the same problems that bother many bureaucracies around the world: deadlock, overregulation and excessiveness. But it should not be forgotten that many foreign and security policy officials are American patriots who take on dangerous foreign posts, poor pay and worn-out offices because, as Americans like to say with a certain pathos, they want to serve their country.

Ambassador Yovanovitch has gotten to the heart of it in her statement to the congressional committee. "I have stayed true to the oath that foreign service officers take and observe every day, ‘that I will support and defend the Constitution of the United States against all enemies, foreign and domestic,’ and ‘that I will bear true faith and allegiance to the same,’” she quoted from the oath.

She and others deliberately put themselves in danger because they believed in America's special role in the world, Yovanovitch said. In return, Yovanovitch and her colleagues trusted her government to have their backs and protect them if they came under attack from foreign interests. "That basic understanding no longer holds true," said Yovanovitch, whose ousting was based on a campaign by shady Ukrainian businessmen who felt threatened by Yovanovitch's anti-corruption campaign and who acted as contacts for Giuliani looking for dirt against Hunter and Joe Biden.

"But where there is a danger, a rescuing element grows as well," Friedrich Hölderlin once wrote. And sometimes even the admirable institutions of a great democracy depend on being defended by ordinary officials who are only a small (or medium) cog in a big machine.