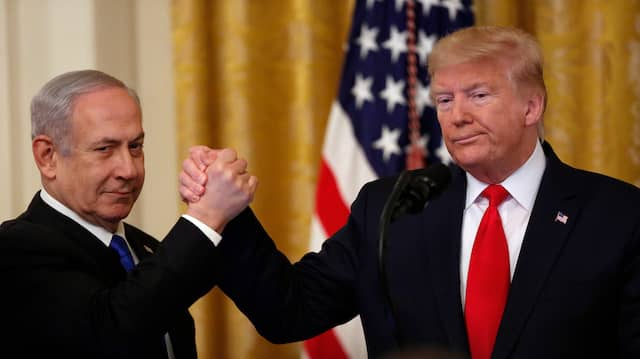 Donald Trump’s peace plan is not a serious attempt to resolve the Middle East conflict. The EU should protest forcefully against Israel’s plans to annex parts of the occupied West Bank.

The Palestinians have long believed that the world was against them, but that is nothing compared to today’s situation.

During Donald Trump’s presidency, decades of American foreign policy have been discarded. The United States has moved its embassy to Jerusalem, stopped all financial support to the Palestinians, declared that the Israeli settlements are not a breach of human rights, and acknowledged Israel’s sovereignty over the occupied Golan heights.

At the same time, regional support for the Palestinian cause has eroded. The Sunni regimes nowadays see Iran as their No. 1 enemy, not Israel. In the fight against Iran, Israel is considered an ally.

Not even the EU has the strength to assert pressure anymore. Israeli Prime Minister Benjamin Netanyahu has masterfully cultivated a circle of loyal friends in the former region of Eastern Europe, who veto any common initiatives.

And in Israel itself, the peace has been increasingly marginalized as an issue; the economy and security appear to function perfectly well without a two-state solution.

In other words, the Palestinians are losing ground – both symbolically and literally – with every passing day. They themselves also contribute considerably to weakening the situation, with Gaza being controlled by Islamic Hamas, and with the fact that the West Bank has not chosen a new president since 2005 or a parliament since 2006.

On Sunday, the Israeli parliament, the Knesset, is expected to vote on the annexation of the West Bank. This is in line with Trump’s so-called peace plan, consisting of Israel taking the areas it feels it will need for different reasons, with the remainder forming a Palestinian state.

It is not a serious peace plan. Timing reveals that the real purpose is something else: helping two leaders who are under pressure during an election year. The Israeli election is scheduled for March 2, and Netanyahu, who has been charged with corruption, is getting a helping hand from his friend in the White House with the peace plan. Trump himself is facing removal from office and will be able to use praise from Netanyahu in his own campaign for reelection on Nov. 3.

We all know that the Palestinians will need to give up sacred principles to reach a peace agreement. The demand that Palestinian refugees should get to return to Israel is unrealistic. An obvious starting point for a two-state solution is that Israel will remain a Jewish state and that their legitimate security demands are met.

But that type of compromise should be the result of negotiation between the parties, not the result of an American president who decides to ignore United Nations resolutions. If Israel gets to redraw the map as it wishes, it will be reasonable for other countries to do the same.

The EU must now gather strength and enter the arena. There is too much at stake to let Trump lay down all the rules in the Middle East conflict.