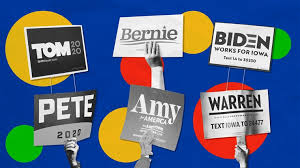 The American presidential primaries begin with the Iowa caucuses. The key issue is whether President Donald Trump, who has shaken the world with his “America First” mantra, will be reelected.

America’s social divisions are deepening because of inequality and populism. America is pulling back from its role of upholding the international order, and Trump has encouraged these developments over the past three years.

How should we fill a prescription for addressing inequality? Are there plans to stabilize the world order? Will bonds with allied countries be repaired?

The November vote is a long way off (nine months). It will be a contest not only of policies but also of human nature and values.

The focus of the campaign’s first half will be the minority Democratic Party's choice for its presidential nominee as it aspires to retake control of the administration. The candidates include the moderate former Vice President Joseph Biden and the left-leaning Sens. Bernie Sanders and Elizabeth Warren.

However, currently the campaign is a melee without a front runner, and no core opposition has emerged against the Republican Party’s Trump.

There is agreement about economic policy, to improve education and social security through a tax hike on big corporations and the wealthy. Yet moderates are being cautious compared to the left-leaning candidates, who are proposing to introduce universal insurance and free public universities.

In international issues, there is also a noticeable difference between the moderates, who refuse to swear off the American military’s deployment, and the disapproving left wing. If internal party strife deepens and it takes time to unite behind a candidate, won’t this just benefit Trump?

The term “rigged system” gets tossed around in America. While upper class income increases, working class wages stagnate. The phrase “rigged system” was born from a suspicion that the elite are manipulating things so that they can monopolize profits.

The widening wealth gap is not all Trump’s fault. Successive administrations have refrained from regulating big corporations while neglecting workers. The growing dissatisfaction across party lines speaks to this.

It does not look as if distrust in politics as usual has improved since the last presidential election, in which Trump was caught up in the whirlwind. Trump may also run using this distrust as a fulcrum on which to curry favor with his base.

As partisan confrontation becomes more radical, it will probably not be easy to bring a divided society together despite the expectations placed on moderates to do so. Nevertheless, substantial inequality and nationalism are issues of global concern that should be overcome.

Beyond the merits and shortcomings of Trumpian politics, we hope that the beginnings of a solution through the wider ideological struggle will be found.