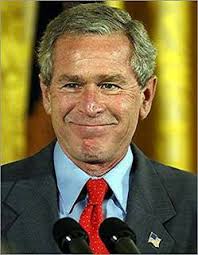 Learning English from former President Bush? Yes, it happened to me. In 1998, two years before Mr. Bush was elected president, he was running for reelection as the governor of Texas. His younger brother was running for governor in a different state and speculation was rife that they might become “brother governors.”

When I asked Mr. Bush — on the campaign trail at the time — “If your brother is elected,” he interrupted me. “No, no. Say when, not if,” he said to this Japanese journalist with a friendly smile.

He was telling me to talk about his brother’s election as being self-evident, rather than merely hypothetical. So that’s the difference between these two words! I never imagined that such a pleasant guy would go on to steamroll through the Iraq War and retire as an unpopular president.

But some observations are less edifying. After a Washington Post column called Prime Minister Yukio Hatoyama “loopy,” a word meaning that his words and actions are a bit strange, the Wall Street Journal published an article called “Japan Dissing.” The author, a researcher at an American think-tank, theorizes that Japan has gone from being “bashed,” then “passed” and is now being discarded as an object of contempt. I agree that such a turn of affairs would be undesirable for both the United States and Japan, but I’m sure that talk of “discarding” Japan is overblown.

As usual, both newspapers’ articles are a reflection of the problem of the Futenma air base. Many people, though taken aback by the many criticisms leveled at Japan, believe that “Japan-U.S. relations will improve provided that the Futenma issue is resolved.” I’d like to put it to Mr. Bush whether that’s an “if” or a “when.”