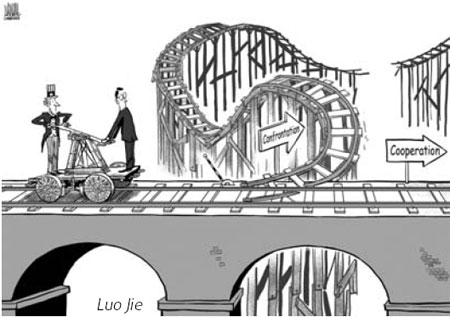 If we say Sino–U.S. relations in 2009 were positive and cooperative, then in 2010 we have seen a lot of conflict and competition, revealing old issues as well as new characteristics for bilateral relations under new circumstances.

The U.S. government’s arms sales to Taiwan is an age-old issue, and Obama is simply following the former administration’s suit without making any effort toward a breakthrough in solving the issue, which has been impeding Sino-U.S. relations. Obama’s meeting with the Dalai Lama showed America’s consistent position regarding Tibet, whereas for China, it was considered a longstanding thorn in the Sino–U.S. relationship. America teamed up with South Korea on the Cheonan sinking incident and gave its support to Japan in regards to the Diaoyu Island dispute. This is reasonable because America has its own Asia-Pacific coalition strategy, and we can see that the thinking and actions America has undertaken for security reasons in this area still bear the marks of the Cold War.

What’s worth noticing is America’s new China policy. America has been active in participating in the affairs in Asia in 2010, such as attending the ASEAN Defense Ministers’ Meeting, making an official entry into the ASEAN Summit and strengthening bilateral relations with India, Vietnam and Indonesia. All this, of course, is out of concern for America’s national interests, but it is also undoubtedly motivated to curb China. Since the mid-1990s, America’s attention in Asia has always been concentrated on how to deal with China’s rise. From the Clinton administration’s principle of “staying alert” to G.W. Bush’s “staying away from danger,” we can see that America emphasizes deterrent measures, including unilateral military deployment and a bilateral security coalition and partnership. The Obama administration’s “curbing” strategy is more of a diplomatic method, stressing the importance of developing bilateral relationships and multilateral mechanisms.

Even on an old issue like trade conflict, America’s concern reveals new complexities. In the past, whether it was intellectual property rights, market licensing, the RMB exchange rate or trade deficit, what America cared about most was whether China played by the rules and whether the trading activities were fair. But now, aside from the concerns mentioned above, America is also beginning to worry about something with strategic meanings, such as when China will surpass America or whether China is planning on weakening America’s economic competitiveness. On my last visit to America, I could clearly feel the strong anxiety across the political realm. What makes them anxious is not only the prospect that China, with its unstoppable momentum for development, might surpass America in the near future but also the reality that their economic recovery is not looking up, and American education and infrastructure, which buttress America’s economic competitiveness, are also going downhill. This is exactly what makes the ordinary trade conflicts between China and America more complicated.

In recent years, with the development of Sino–U.S. relations, China is putting more and more emphasis on the making and revision of rules and regulations when dealing bilaterally with America. In the case of the U.S.’s arms sales to Taiwan and its relationship with Tibet, the unreasonable rules of the past will have to be revised, because they no longer apply to the new situation for Sino–U.S. relations. Although China and America may wrestle over the revision of regulations, from a wider perspective, changing the rules will not only benefit China but also America, because against the backdrop of the ever deepening interdependence of trade and global cooperation between the two nations, a good bilateral relationship is conducive to America’s national interests. Naturally, the benefits America may reap out of Taiwan and Tibet are growing more and more limited.

And on issues of reforming the international financial order and addressing global climate change, China and America, together with other countries, are working on the new rules. Due to the two countries’ important standings in the international financial order and the global ecological order, the result of competition between China and America will affect the shape of the new rules. For China, the new international financial order should reflect China’s rising economic strength, and at the same time embody the principles of justice, equality, tolerance and order. And the new global ecological order has to take the reasonable demands of developing countries into consideration and urge different countries to make joint efforts to create a better environment. Because China and America have great interests and shoulder big responsibilities in these new issues, their relationship will mainly be cooperative. Although conflict and confrontation is inevitable, reaching a consensus will eventually be the only way to go.

China and America are exchanging fire on a more frequent basis, and regardless of the essence of the relationship, competitive or cooperative, the fact is there for everyone to see: China’s national power and its international standing have changed. Had it not been for its ever-growing national strength, China would have nothing to compete with America.

With the change of its standing in the competition with America, China should pay more attention to the details. The purpose of competing with America is not only to solve specific problems but also to shape a healthier and more constructive relationship between the two nations. Guiding America’s China policy with mature diplomatic strategies so as to affect America’s diplomacy will be the right way to go.

Finally, the competition between China and America will not only affect the affairs in the two countries but also involve issues on a regional and global level. Therefore, China also needs to watch for its international image and responsibility when competing with America. As for the competition itself, we should make sure that its negative effects do not affect other cooperation on a multilateral level. In multilateral cooperation, we should learn to make suitable compromises in order to make sure that we can reach a consensus that meets the general interests of the international community.