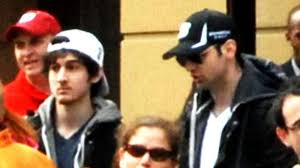 The fugitive was in the U.S. with a scholarship and was naturalized on Sept. 11, 2012. He uploaded fundamentalist videos online.

“A car goes by with a Chechen, a Dagestani and an Ingush inside. Question: Who is driving? Answer: The police.” There is nothing to laugh about concerning what happened in Boston — the identification of the two terrorist perpetrators of the attack at the marathon, the violent death of the eldest, the siege of Boston, the further shedding of blood — but this is a joke posted on the Russian social network VK by Dzhokhar Tsarnaev, who committed the massacre with his older brother. His page shows his “worldview” — Islam — but also his “priority” — “career and money.” There is a link with photos of fighters in the war in Syria against Bashar al-Assad and a link to a web page that says: “There is no God but Allah, let that ring out in our hearts.” Is this the jihadist? Is this the background, seasoned with humor, of a 19-year-old boy who has become a mass murderer and was even led to perform a second attack with his brother, killing a 26-year-old American police officer the day after the massacre and then fleeing with tires squealing from the body of his brother Tamerlan, a 26-year-old with ambitions of becoming a boxer, who was killed by police? Soon we will know all about the Islamist turn in the lives of the two tragic protagonists in this crazed America, which for the first time after Sept. 11 must again drink from the bitter cup of indiscriminate danger, powerlessness and fear, even if the FBI shows — but only after the fact — a magnificent speed in identifying the culprits.

Dzhokhar, as seen in the pictures released by the police while they urged the entire population of Boston to remain locked indoors to avoid his ferocity, is a cute and cuddly 19-year-old with large curls of black hair and innocent eyes. He comes from the misery of Chechnya and certainly did not know then [when he arrived in the U.S.] in 2002 that he would attack the American dream. He attended elementary school in Makhackhala, on the border with Dagestan. He liked to laugh, and he posted a video online entitled “tormenting my brother,” where you see Tamerlan, his now-dead brother, mimicking different Caucasian accents, like Borat, his favorite movie. In 2011, he received a scholarship of $2,500, an encouragement and an invitation to love his new hosts and fellow citizens. A fellow student, a stunned brunette with a ponytail, described him as quiet: He always appeared to be a quiet boy, went to parties and was a good sport at the Medical Institute in Cambridge — a student without problems. Yet everything was already written on the Internet, in the photos, in his repeated creed.

Sometimes ideas can be not only a greater area of freedom, but also our nemesis: We cannot accept this because here lies the usual dilemma between security and freedom of opinion that haunts us this time, as always. Tamerlan, his brother, was certainly his role model. His life story as a handsome sportsman includes a strong Islamic inspiration, as shown in the immense diary of our time, the Internet: He was loyal, did not mix with Americans because he did not understand them, did not smoke, did not drink, did not take off his shirt because he did not want the religious girls to get ideas. He hoped to be chosen as a boxer for the U.S. Olympic team.

This is how terror functions: It is nourished by the surrounding society and dreams of abolishing that society. Most chilling is a picture where you see Dzhokhar, with the white cap that helped to identify him, standing behind the crowd that it is his goal to kill. He is probably placing the backpack containing the explosive. In the front row, close to him, is Richard Martin, the eight-year-old boy killed by a 19-year-old terrorist. For that 19-year-old, as he passed by whistling, almost ready to kill the child and other innocent people, the only emotion was probably ideological exaltation. The same as it was for Mohammad Atta who, before leading the attack on the twin towers, lived in Düsseldorf, where he studied with a sophisticated group that planned the restoration of ancient Egyptian monuments. Or as it was with Mohammad Sidique Khan or one of the other Shehzad Tanweer, the group that attacked the underground and buses in London, who all seemed perfectly British — car enthusiasts, sports, average English lives — and like so many terrorists who passed through Italy, at university or at work, into Afghan fields to train and be transported to various attacks. Almost none of the most notable terrorists were outcasts who were expelled or refused training in a Western country. Dzhokhar was very attached to his friends, “such a nice kid” who lived on campus in Cambridge. A companion remembers him as a wrestling champion who was always ready to help others, who always gave a helping hand to all, “a typical American boy.” He received American citizenship only on Sept. 11, 2012 and immediately decided to put it to good use.