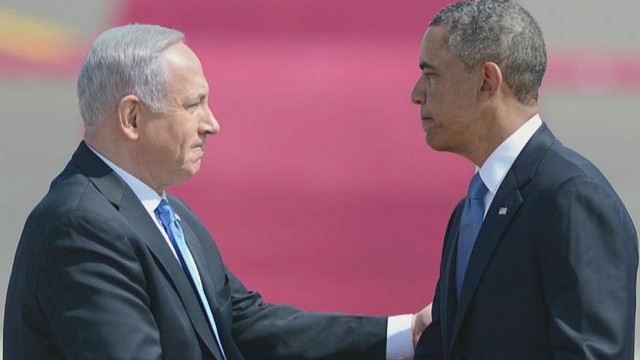 Sweden has recognized Palestine as an independent nation. This step was taken as criticism of Israel grows in the U.N., and as relations between Washington and Tel Aviv become tenser. An anonymous American official called the Israeli prime minister a coward. Republicans in the Senate have called for Obama to apologize. Washington has stated that there will be no apologies, although John Kerry will engage in dialogue with Netanyahu.

The American media has dubbed the squabble between Washington and Tel Aviv another episode of the soap opera in which Barack Obama and Benjamin Netanyahu play the leading roles. The origin of this verbal battle was an interview, published in The Atlantic, given by an anonymous member of the Obama administration.

“The thing about Bibi is, he’s a chickenshit … The good thing about Netanyahu is that he’s scared to launch wars. The bad thing about him is that he won’t do anything to reach an accommodation with the Palestinians or with the Sunni Arab states. The only thing he’s interested in is protecting himself from political defeat … He’s a coward,” the official said.

As AFP (Agence France-Presse) reported, Netanyahu reacted furiously to these revelations from an anonymous, official face of Washington. He vowed, “I am not willing to make concessions that will endanger our country.”

Republican Senators John McCain and Lindsey Graham did not fail to involve themselves in this war of words, calling for the White House to apologize and investigate the person who gave the interview.

But there will be no apologies. Instead, Secretary of State John Kerry will speak with Netanyahu. American officials have said that the statements made in the magazine do not reflect Obama’s views. “There are issues where we express concern and there’s disagreement,” conceded State Department spokeswoman Jen Psaki. But the relationship between the U.S. and Israel “remains strong,” or, as CNN commented, a divorce is not expected.

Obama and Netanyahu make a strange couple. There are a few factors at play here, suggests Aaron Miller, a scholar who was a member of the U.S. delegation for Middle East negotiations. First, “Bibi is gruff on the outside and unsure of himself on the inside. Obama is mellower in his exterior and supremely confident of himself inside.”

In an interview with [this publication], Middle East and North Africa expert Irina Mokhova noted that on an official level, the U.S. — just as it always has been — is unconditionally allied with Israel. “However, the recent scandals, as well as other unofficial statements from high-level American officials such as Kerry, speak to the dissatisfaction of the American administration with the inflexibility of Netanyahu’s policies. The unflinchingness of Netanyahu’s position is rooted in his single trump card: the Israeli lobby in the U.S., which will neither allow for a change in America’s Israel policy nor for a decline in the level of aid and support,” she said.

This de facto ultimatum from Netanyahu’s side is horribly bothersome to many who surround Obama, and led to the recent outburst. Many American politicians are coming to the conclusion that unconditional support for Israel is detrimental to U.S. interests. Between Israeli settlement activity, large-scale military operations against Gaza and Palestinian civilian casualties, the world’s attitude toward Israel is changing. This is clearly demonstrated by Sweden’s recognition of Palestine, as well as — albeit symbolically — by the British Parliament’s vote to recognize the Palestinian nation.

“Under the current circumstances, American support of Israel tarnishes Washington’s image and makes the possibility of a peaceful solution to the Palestinian-Israeli conflict even more remote. Moreover, it devalues the meaning of the Nobel Peace Prize, which was awarded to Obama on the basis of his first presidential term,” concluded the expert.

Israel reacted sharply to Sweden’s decision. Foreign Minister Avigdor Lieberman stated that the decision would only lead to an increase in extremists and the unwillingness of the Palestinians to negotiate. At the same time, Israel has no intention of halting its plans to build over a thousand homes in the Arab section of Jerusalem, and is also creating new infrastructure on the West Bank of the Jordan River.

These projects were condemned by a majority of the U.N. Security Council at a meeting held yesterday. The Palestinian delegate called for Israel to be forced to stop construction. Both David Pressman, the U.S. alternate representative to the U.N. [for special political affairs] and Under-Secretary-General of the U.N. Jeffrey Feltman criticized Israel’s actions. According to Feltman, in spreading Israelis over Palestinian lands, Tel Aviv is violating international law.

But for now, the tangible results of these proclamations still come to zero. The Palestinians’ dream of an independent nation remains a dream.